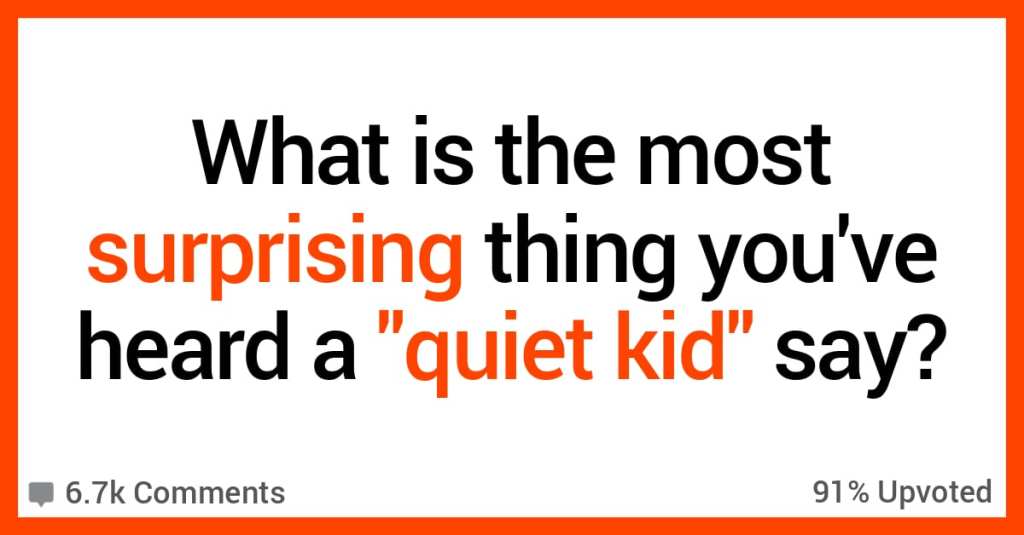 There are all sorts of stereotypes about students – there are jokes, popular kids, nerds, band nerds (special breed), the wild kids, and yeah, the “quiet ones.”

We all joke that the quiet ones are the ones you have to watch out for, but man – never has it seemed more true than hearing about the moments these 17 “quiet kids” finally spoke up.

The quiet kid from my grade stood up one day, grabbed a broom, stood on a chair and began trying to swat bees that got inside.

One bee landed on the window where quiet kid proceeded to yell “DIE BEE DIE” and then swatted and shattered the window.

He screeched when it happened and then sat back down.

16. This is how people become legends, my friends.

In class he asked the woman teacher if he could go to the toilet.

She sternly replied, “You’ve got two minutes, Richard” and Richard says, “Two minutes? It takes me that long to unravel it”.

Teacher goes red and everyone loses it.

15. When you wish you could give her a fist-bump.

One of my students hardly said a word all year until a couple weeks ago. I was trying to get a group of talkative ones under control and she had enough.

She yells out “SHUT THE F*CK UP! IM TRYING TO WORK YOU F*CKING A$SHOLES”

Awkward silence followed because I didn’t know how to handle the normally studious and quiet one losing it.

We were having a bullsh%t elective course and we ran out of stuff to do so we wound up having story time. My friend walks up to the front and starts telling us about how he once got pretty badly injured. Basically he was walking into his friends house, slipped on some black ice, face planted on it and his front teeth tore off most of his front lip and broke off.

He ran into the house babbling and bleeding (he was like 11 and was missing part of his face so he wasn’t 100% coherent at the time) and his friends mom takes one look, runs into her bedroom locks the door and doesn’t do anything until my friends dad arrives and starts screaming at her. My friend says he still has no idea why the grown adult woman couldn’t handle the situation any better and we all start making guesses and bullshit psychoanalysis.

Cue the quiet kid raising his magnificent head and blessing us with enlightenment: “maybe she just needed to finger herself real quick”

I was best friends with the “quiet kid” in middle school.

It wasn’t so much shocking as the stupidest thing I’ve heard him say.

He got this thousand yard stare all of a sudden and just said “I can’t remember what color my dog is”.

So this one kid, who barely ever said two words, one day, asks the teacher for the time (it was at some after-school thing and there was no clock).

The teacher says the classic “time for you to get a watch”, which for some reason was funny to everyone else.

He looks the teacher dead in the eyes, and once everyone quieted down, he says “so are you gonna tell me the F*CKIN’ time, or what?”

My dad is very quiet, to the point that it makes most people uncomfortable, even me sometimes.

One day, we’re at the park and a woman walks passed us and my dad quickly says “What if I punched that woman in the face and said ‘Sorry I thought you were my wife.'”

10. Living up to the stereotype.

In high school, there was this really quiet girl named Grace. She was a pleasant person, but wouldn’t say anything more than “Hi” or “sorry” unless you asked her something. Even then, she’d appear terrified.

It was at prom, and I was in the parking lot of the venue we had prom at. I lost a contact, and had to run to my car to grab my glasses. In the parking lot, Grace was smiling and walking from her car. She looked at me, laughed, and said “Ryan (her prom date) just fingered the f*ck out of me.”

I still laugh about it to this day.

This douchebag kid who constantly fucked with people was in line with the quiet kid and the quiet kids friend. The quiet kid is a bit over weight so when he gets up to the lunch lady and gets his chicken nuggets, the Douchebag says “You dont want extra nuggets big guy?”

The quiet kid out of no where just starts ranting: “No I am all set but what are you up to this weekend? you wanna hang out grab some food maybe f*ck a bit? I like to be on top and you look like a bottom, what do you say wanna f*ck tonight?”

The entire line is dead silent. The douchebag starts getting all pissed off and acting like he’s gonna start a fight and the quiet kid says “Ok fine you can be top baby.”

The douchebag kid leaves to the entire line laughing their asses off at his expense. No idea if the quiet kid was gay or he just knew that even jokingly suggesting the douche kid was a homosexual would upset him more than anything. But I do know he left the line with his delicious chicken nuggets and a huge smile on his face.

7. There must be more to this story.

He started to attack someone in my class with a table when the teacher got a cup of coffee.

That was quite… something.

Quiet guy I work with is absolutely hilarious.

He never said much until he came up to me and asked “What happens when an Eskimo c*ms?” before I get the chance to respond he throws a hand full of ice at me and walks away.

5. He couldn’t let the perfect moment pass him by.

I was in marching band in HS, probably 7 years ago now, and we had this huge muscular guy as our brass instructor. He would always yell at us to “NAIL THESE CHORDS” or “YOU’RE NOT PLAYING LOUD ENOUGH”

There was this little Asian trumpet kid that was so innocent and nice; he barely ever spoke a word. One really really hot afternoon, our instructor was being especially loud, and said “WHY DONT THE TRUMPETS BLOW HARD ENOUGH”

Dead silence across the field as all the brass are waiting for next instructions. Then we hear:

“Why doesn’t your mom blow this d*ck hard enough” from quiet trumpet kid. Needless to say, we all laughed, got push ups and laughed some more.

In Junior High in the mid eighties the game “Trivial Pursuit” was all the rage.

We played it in math class one day and this kid, Gary, who NEVER SAID ANYTHING AT ALL totally spanked everyone else by answering every single sports related trivia question.

He got a lot of attention for it and I believe he walked a little taller after that day. I don’t think I ever heard him say anything else, but I did see him sitting on the bleachers at a few sports events.

“72 virgins is nowhere near enough virgins for eternity.

That’s like….a weeks worth of virgins.”

At school, having just shown me the scope for a (supposedly his) sniper rifle: “If the fire alarm ever goes off and you can’t find me, don’t use the doors as an exit”

1. And he became Tolkien?

In high school, I had first level Spanish with this kid who was super quiet.

At the end of the year, we all had to give a speech in Spanish in front of the entire class.

This motherf*cker stood up and gave a speech, not in Spanish, but in a language that he had spent the entire year inventing.

It’s bound to happen to every quiet kid at some point, right? You just can’t keep your mouth shut for another second?

If this has been you, or you’ve witnessed something similar, please tell us the story in the comments!