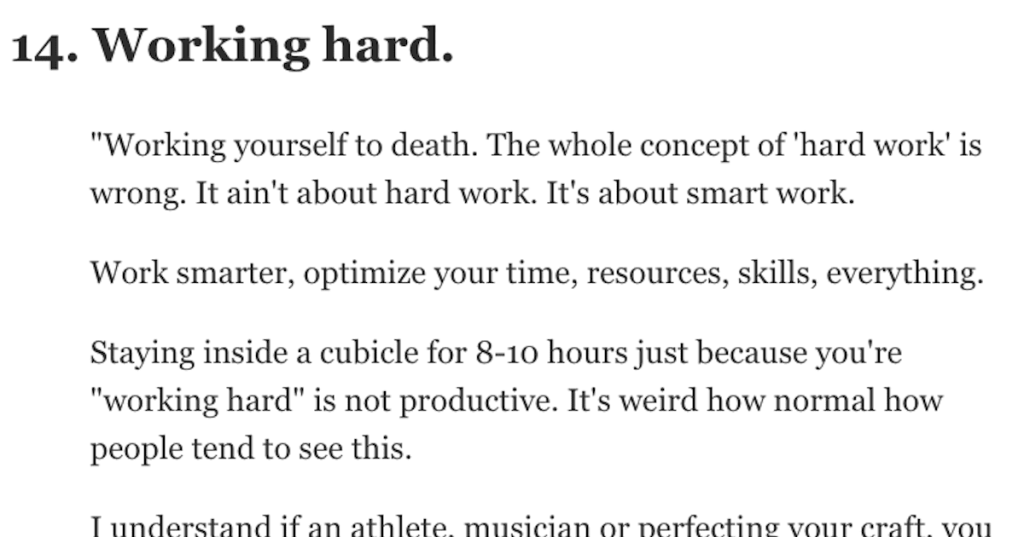 Sometimes, you’re just minding your business, going about your daily routine when you realize: LIFE IS SO WEIRD.

From colloquial sayings to random societal norms, there are a ton of frankly bizarre things about being human that go unnoticed most of the time.

But thanks to AskReddit, you now have 17 of those things to ponder, just for fun.

“In my opinion weirdest thing accepted by society is ‘The pronunciation of colonel.'”

“Is it just me or do British people pronounce lieutenant as ‘left tennent’.”

“I think making a kid famous intentionally is abusive in almost all cases. They are not equipped to handle the consequences.”

3. The cost of losing someone.

“Funeral prices. 15k to bury a body? These people are really just going to put that burden on the freshly mourning families?? Ridiculous.”

“The insane amount of packaging on everything. With one phone charging cable I’ve got a box, 2-3 pieces of moulded plastic, 2 twist ties, and instructions. We know our garbage is an epidemic problem but we don’t bat an eye at the crazy packaging.”

“In the US, the huge gaps underneath bathroom stalls.”

“It’s largely the same in Canada, I hate it so much.

“Actually, just yesterday I was in a stall that was fit together perfectly, not a gap to be seen aside from underneath and above the door(both of which are not likely to be seen through unless someone is purposely peeking). I took a minute to just appreciate the lack of gaps and tight construction of that stall, haha.”

“When you think about it, it’s kind of weird that they’re using their influence to get paid even more to get you to buy a product they likely don’t use themselves.”

“This is especially insidious when it’s stuff like the Kardashians and other Instagram ‘celebrities’ using their platform to advertise those diet teas that are just laxatives or appetite suppressant lollipops. Like these ladies know damn well the majority of their audiences are young women in their teens and early 20s, and they also know damn well that that is the group most susceptible to developing eating disorders but they still promote these “get skinny super quick in an unhealthy way” products, even though they themselves probably don’t use them and have multiple personal trainers, dietitians, chefs etc. on their payroll.”

“I like this person because I see their face a lot and other people like them! I better give them some of my money and things even though they already have more of both than I ever will!”

“And awards shows for celebrities. My husband and I don’t watch much tv, and he always thinks it’s a big deal when the Grammys or Oscars are on. He thinks I’m so mean for not caring. I just tell him no one cares if we get an award for anything, why should I care if they do?”

“I assume that’s a weird subculture of women who wanted dolls instead of kids.”

“I was in a room where someone else was watching one of those trash shows. (Grandma loves her trash TV.) One of those mothers was getting all defensive and saying that child beauty pageants aren’t the problem, the people who see them as sexual are the problem… meanwhile her kid is painted up like a Televangelist’s wife and twerking on stage…”

“TV censoring, at least in the US. Brutal murder of a prostitute? The blood and violence is fine, but she has a boob out, censor the nipple.”

“Stagnation of leadership. There’s a tendency for societies to find a style of leadership and say ‘this is the perfect way to lead and cannot go wrong. Other people should all adopt this too.’ And then wonder why corruption happens. Every societal structure succumbs to it eventually.”

“Prostitution is super duper illegal…but not if you film it and share it with the rest of us!”

12. Euthanasia is only for animals.

“Working yourself to death. The whole concept of ‘hard work’ is wrong. It ain’t about hard work. It’s about smart work.

Staying inside a cubicle for 8-10 hours just because you’re “working hard” is not productive. It’s weird how normal how people tend to see this.

I understand if an athlete, musician or perfecting your craft, you have to put in the work. After that, work smarter, not harder.

“We spend 1/3 of our lives unconscious.”

“We poop in perfectly clean water.”

“Asked my brother (civil engineer) this a few years ago so take with a grain of salt: You can use grey water (non drinking) but it has a habit of being more complicated than it’s worth and ends up being potentially more expensive due to messing with pipes (leaving deposits and such).

Apparently it’s just easier in the long run to use clean fresh water.”

“We rub paper between our butt checks until we can’t see poo anymore and say “that’s clean enough”. Nowhere else on our body would this be okay.”

So what do you think about these?