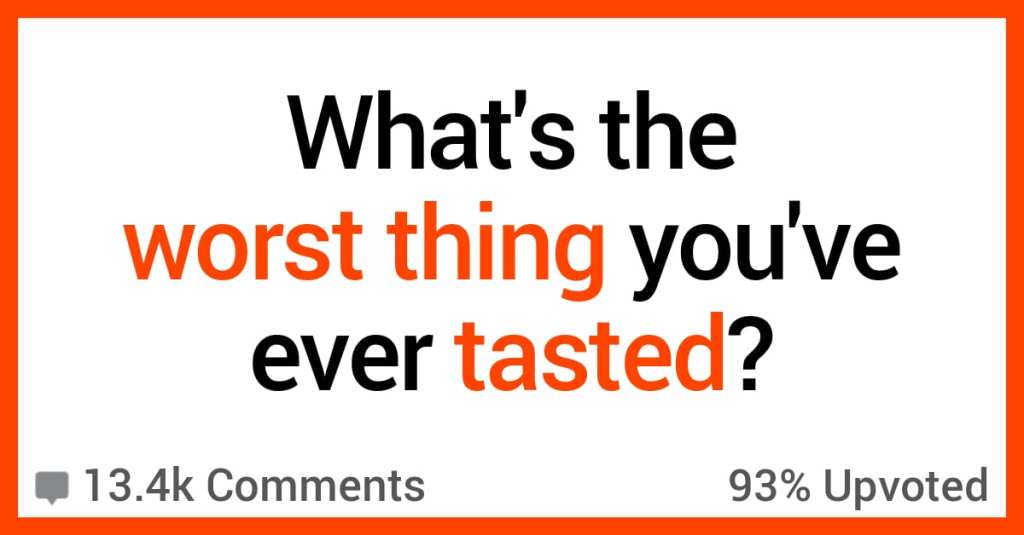 17 Truly Disgusting Things That People Tasted and Will Never, Ever Again

Some people never, ever try new foods. Other people try everything, and most of us fall somewhere in the middle.

Listen, we want to be adventurous and try new things, but if we know what something is, it can be weird enough to turn us off.

These 17 people gave some really strange things a go – not always on purpose – and now they’ve got good answers to the question “what’s the worst thing you ever ate?”

I was eating a hard boiled egg.

I bit into the egg and my mouth was filled with what I can only describe as a mouthful of wet dirty pigeon.

I looked down and found a chicken fetus. It had feathers and everything.

And it was the only time I almost puked from food.

I stayed with some friends one summer during high school and the mom did not cook, it was a known thing. She grew up wealthy and married down into the middle class.

One night she made something that was cream of mushroom soup, cooked in a casserole dish with fennel seeds, crushed up Ritz crackers and rice – but it all soaked together into a single consistency. the taste still haunts me.

15. So bad it nearly caused an accident.

One time I was eating a bag of chips (I think they were Doritos) while driving late at night. It was dark so I couldn’t really see what I was eating. Turns out in the bag there was a big concentrated clump of flavoring dust that formed somehow.

Popped that whole sucker right in my mouth. BIG mistake. You might think it would just taste like chip dust, but no. It tasted like dirt and pain. It’s like there was so much condensed flavor that my brain had an integer overflow error. I nearly drove off the road.

So if you ever find something like that at the bottom of a bag of chips, I strongly advise not trying anything more than a little nibble of it.

14. That’s quite a description.

Those quixel things. You make little art like a diamond pick axe from mine craft out of small coloured cubes on a grid then spray water on them so they stick together. Anyway, it said do not put in mouth.

The first thing I did and OH MY GOD it tasted like a lemon that had been addicted to heroin for the past 8 years. It was the worst taste ever

13. Cheese is such a personal choice.

I once ate a soft cheese that tasted like band-aids (plasters). Why do I know what that tastes like?

I guess from pulling them off my finger with my teeth? I don’t know. But that cheese was straight bandaids.

Took a bite out of deodorant when I was in middle school.

It was bitter and made parts of my mouth that came in contact really dry. Definitely good at what it does.

One time I went into an apartment of a deceased lady… died in her bath.

I was an emt… I could taste her…been there in the summer heat for 2ish weeks.

I used to eat chicken liver when I ate meat. I would bread it and fry it. It was so good.

One day I found fried chicken livers in the deli section of the grocery store and I had been craving them so I bought them. I ate the first one just fine, maybe a bit dry. The second one I bit into was… Jesus. It had obviously turned or was diseased or something. It was a gooey almost pudding-like consistency. The flavor was so pungent that all I did was chew once but it was all I could taste or smell immediately. I couldn’t breathe. My eyes started watering. I started throwing up. Even my throw up tasted like it, though I hadn’t even swallowed it.

After I finished throwing up I brushed my teeth repeatedly and literally drank mouthwash. I did not get that taste out of my mouth for days.

To this day (it was about a year ago) I can still remember that taste.

9. Too many of us have been there.

One time I was in the very early stages of pregnancy. I had been taking fish oil supplements. I had morning sickness really bad during this pregnancy.

I burped not long after taking this pill and the taste was horrible, dead fish! It was so nasty I immediately threw up catching it in my hands as I ran to the sink.

The disgusting beans from the Beanboozled challenge.

Seriously, how tf do they get those nasty a$s flavours?

I was in a mall one time and the candy store there had a cooler with a bunch of sodas. One of these was Bacon Soda. Me being a very curious person who likes trying new things was like, “Hey, I like bacon, I like carbonated drinks, why don’t I try carbonated bacon?”

I went outside to get some fresh air and try this soda because I didn’t want to accidentally spill anything. I took a sip and it was unbearable. It tasted like a dog treat mixed with what you’d imagine burnt rubber taste like.

The worst part was there were people around so not only did I have to hide the disgust on my face, I kept drinking so people wouldn’t judge me for wasting a soda. The lesson here is the classic

Curiosity killed the cat mixed with don’t be afraid of what people think. Seriously, don’t.

For 35 years (post war to about 1985) my Grandfather worked in a lab developing new cake mixes for donuts and other cake stuffs.

After retiring, my Grandfather would make weekly trips to the old plant/lab for a visit. While there he would often be given as many paper bags of plain vanilla donuts which were the test batches for the day. If I recall the lab always produced and entire rack of material to test the new mixtures. Most went to trash because people who worked there could only take home so much.

When I visited my Grandparents house during that period, also on a weekly basis, many of those bags would be handed down to me. I probably only ate about 2-3 donuts per week.

One day, I got into my car to go to a matinee movie with school friends and I brought a donut with me. Once moving I grabbed the donut from passenger seat and bit into it as normal. What happened next, almost caused a motor vehicle accident. The taste of this one bite was the most REVOLTING thing I had ever (or since) experienced. It sent signals to my brain that I MUST evacuate this material from my mouth IMMEDIATELY!

I stopped the car in the middle of the road in order to open the door and spit that vile shit out onto the road. I also threw that donut as far into the distance as possible. I was completely disgusted but finished my mission of going to the movies.

Next time I was at Grandparents house I mentioned this crazy experience I had with one of the donuts, and the fact I threw out the entire batch, thinking it was actual poison. He thought about it for not more than a moment and a smile ran across his face. One of his former lab worker colleagues had intended that donut (or that bag perhaps) for HIM. He indicated it was an old workplace prank to add this vile, but very much non-poison, chemical to the mix to punk the other staff. After telling me all this, he looked me in the eye and said: “That shit is pretty fucking evil isn’t it?” We had a good laugh.

I guess I can never know with certainty whether he arranged that for me, but from what I know of him, his practical jokes didn’t typically have such a nasty effect. I believe him more than his colleagues.

I can still taste it in my mind a little bit. That is how horrible that taste was.

Grandpa has been gone since 1997, this all happened in 1987. I would taste that shit willingly ONE more time if I could only laugh with him about it just a once more… (I am doing that anyway, but be better with him present)

I worked in a cadaver lab a few years back and we were pulling down bodies from the fridge for the next year of students.

One of the bags ripped from above my head and poured directly onto my face and mouth.

I’ve never tasted anything worse and I doubt I will ever have the pleasure. 🤢

3. No one likes that experience.

Once when I was like 14 or so I got some sort of stomach bug and I was throwing up for 24 hours. I emptied my stomach totally and was still retching.

About the third or fourth trip on an empty stomach I vomited green bile. I’m still haunted by how disgusting that tasted.

2. I guess it could have been worse.

I used to install gutters, there was this one commercial building that already had gutters, but needed more downspouts. I cut into the bottom with a hole saw, and got mud and ice from inside the gutter in my mouth.

It tasted,,, strange. Bad, and kind of nutty. Turns out, there was a decomposing magpie that I was also drilling into.

1. Why would someone make that??

I thought it was just going to be a random mystery flavor or at worst just a somewhat bad taste but boy was I wrong! When you bite into the “rotten zombie” flavor it tastes what rotting meat smells like and it doesn’t go away.

After you eat one it just sticks with you and the smell comes back up every time you breathe. So disgusting.

These are excellent answers and I shall avoid each of these in the future, if possible.

If you’ve got a good answer to this question, share it with us in the comments!