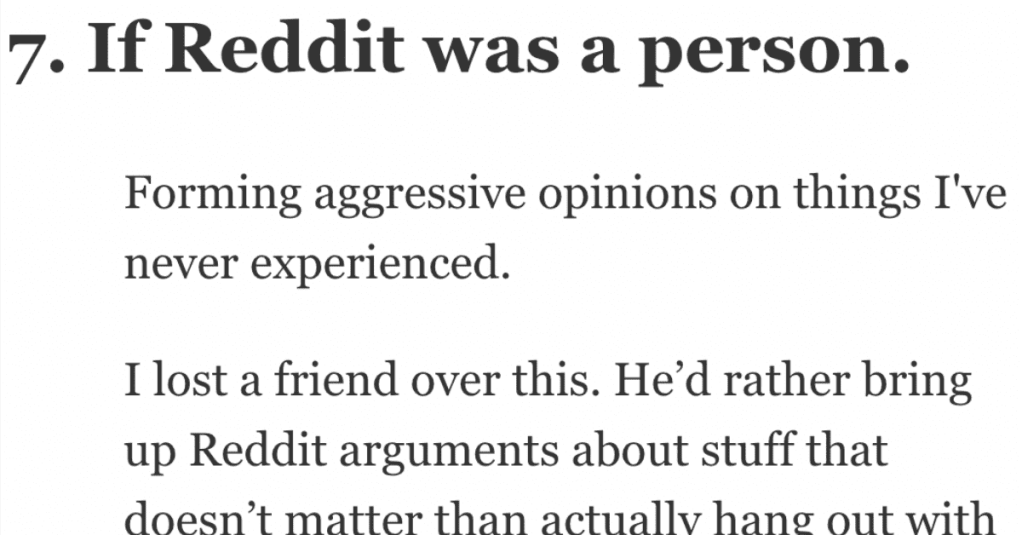 Listen, the internet as a whole loves a lot of strange things. And one of the strangest things about the entire culture, if you ask me, is how the things they do that annoy me at the beginning somehow start coming out of my mouth without permission.

Do you know what I mean?

That said, we all have to draw the line on jumping on the internet bandwagon somewhere, and these 18 people have made that line in the sand.

Downvoting someone’s genuine ignorance and desire to learn…I see people asking “why” and then they get downvoted to hell.

This has happened to me a few times in r/legaladvice . I genuinely ask why someone can’t take an action (I’m sure there’s a reason, of like to know what it is so if I’m in a similar situation I don’t make that mistake) and I get no response but downvotes to hell. I’m just curious!

Being super aggressive when someone doesn’t have either the same opinion, or doesn’t care enough to have a strong opinion.

As in, my opinion of pineapple on pizza is that I don’t like it. I have tried it, it’s not my jam. If you like it, that’s cool, order your own. I don’t care enough to argue and fight about pizza toppings. I have enough shit going on to care. And if someone else gets worked up? Okay. Bye.

The over use of the word gaslighting.

We’ve applied “gaslighting,” and “toxic,” to so many behaviors that everybody on earth is at least a little bit toxic now.

Acting self-righteous over disliking something popular.

I am so tired of seeing every single person who posts about someone they know [doing something crappy] being told that their loved one is probably narcissistic.

It’s such an uninformed response that totally dismisses any other cause or context.

Everything is right or wrong, their is no room for anything else. It’s either you completely agree, or you are a worthless piece of crap.

I feel like this is more so true on the front page big subreddits. On a lot of the smaller ones people talk more like normal people given that there isn’t thousands of people upvoting/downvoting the conversation into a binary response pattern.

Crypto and weed. Why am I even here?

Cryptoweed! We should make it the next big thing. It’s no dumber than NFTs.

Every single comment has to be 100% unambiguous and account for every angle and every argument or you will be downvoted and dogpiled by the mob in the comments.

Bashing every religion and being a complete a$$hole to anyone who is religious and trying their hardest to insult attack and sacre religious people even going ss far to threaten to murder them.

9. People are not equipped.

I know how this is going to sound but I don’t care : a lot of people are not equipped to understand second degree jokes, sarcasm, or even a simple, nuanced opinion. They just function with black and white views on things because it’s easier, and frankly, the general population is not that smart. It just translates on Reddit with downvotes and people arguing over nothing to get validated. But it’s true in society as a whole.

I know it sounds pretentious as hell but it’s just what I observed so far in life. And I know I am a moron to someone else, so be it.

Crapping on people’s opinions like people aren’t entitled to their own emotions.

Had this a few times. It’s becoming a bummer to see my notifications sometimes when I open the app. I just try to make sure my comments are balanced, and not gratuitously offensive. Then I’ve played my part of responsibility. If someone chooses to be offended, that’s their decision, stuff’em!

I lost a friend over this. He’d rather bring up Reddit arguments about stuff that doesn’t matter than actually hang out with anybody.

He was once over hanging out with everyone and we’re all playing something on the switch and he comes up “my gaming pc is far better than this crap console” wholly unprovoked.

Every single time we hang out with him he’ll pick fights about the epic game store, or how much he hates Fortnight (none of us have ever played this game). We’re 35 and he’s out here talking our ear off about some opinion he heard on YouTube or Reddit about how bad company X is and how we’re dumb for supporting them.

The worst or maybe best part is he hangs onto these arguments for years and spouts them off randomly like some kind of boomer. It’s really 2021 and he’s out here trashing “scene kids” and hating on Justin Bieber.

Being super rude and aggressive to strangers for no reason.

You want a fun story?

Last year? I was commenting on a post about zoos, and how I always liked that the ones I grew up with were free but still nice

This guy. This absolute loon somehow, insisted in every fiber of his being, determined that since the zoos I went to were free, they were like Tiger King style stuff

And they, and myself were animal abusing scumbags. For zoos have to cost money for them to not be garbage

I rarely block people, and I think he was my first

5. It’s all about personal experience.

“I noticed this post you wrote in 3 seconds doesn’t line up with every experience I’ve ever had. This is extremely harmful to me, the main character of the universe.”

Showing me subreddits on my feed I might enjoy.

Suggested content in general can eff right off. I can find what I want to see; just show me the content I’ve signed on to in chronological order.

It usually goes hand in hand with someone putting words in your mouth and using black and white thinking, “well, if you feel that way about X then obviously you HATE Y!”

I commented in a thread where the OP was complaining about the expectations for younger and younger women to get fillers and Botox and plastic surgery and how she was never gonna do that and just didn’t give a flying fuck. I said something like “you know good for you, I really respect that” yada yada.

And this person came out of nowhere and was like “OH then that basically means you have NO respect for anyone that DOES get any kind of plastic surgery or Botox, you and your judgmental comments are part of the problem!” And it was like fucking WOAH. First of all, I never fucking said that, and second of all, what is wrong with respecting someone for accepting the skin they’re in? People are ridiculous.

I remember a few months back there was an Ask reddit thread on Zookeepers it was a great thread with a lot of interesting responses.

Come up with some more original questions please.

These are respectable places to call it quits, I think, though I confess in some instances I’ve not been as strong.

What are some things you can’t stand that “everyone” else loves? Dump your rants on us in the comments!