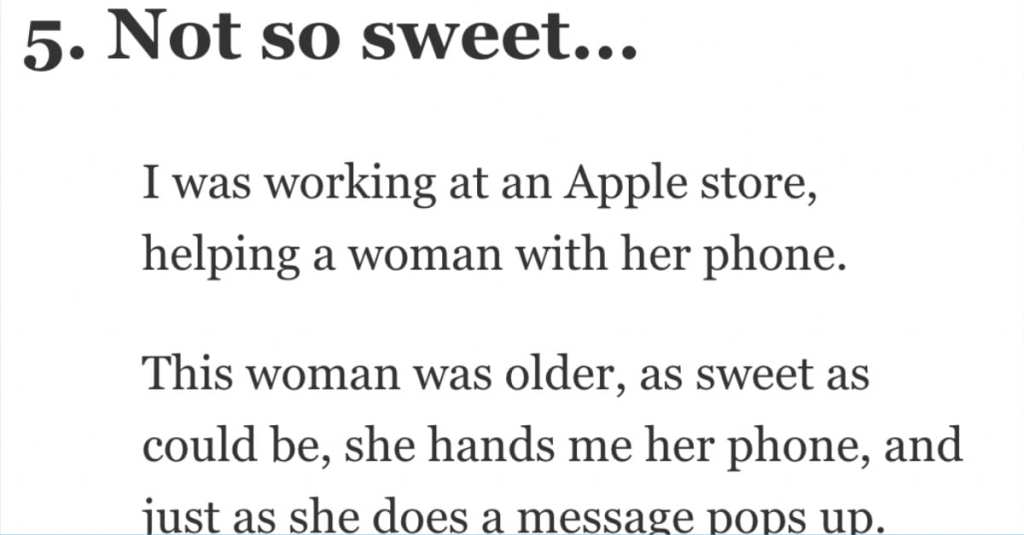 Even for people who are fairly straight laced and generally nice, letting someone else look through your phone – or really use it for any reason – can be something that puts you slightly on edge.

If you’re someone who isn’t generally those things, I imagine it’s fraught with major anxiety and is just something you don’t do if you can help it.

If you’re a fan of wading through other people’s anxieties, here are 18 times someone else saw something they really shouldn’t have while using someone else’s phone.

18. Sometimes that’s all you can do, really.

Showing my aunt a pic when a text saying “I’d f**k the s**t out of machine gun Kelly”’appeared.

We both pretended we didn’t see it and quickly started talking about something else.

17. This is one of the best things I’ve ever read.

Was showing my mum some cake ideas for my wife’s 30th that I was considering. My wife text me and my mum (for unknown reasons) got a full view of my wife’s poon with the caption “guess what you’re eating for dessert tonight?”.

I tried to grab my phone back, and my mum went back to browsing cakes without skipping a beat. As I was leaving my mum thought it would be funny to ask “Would you like 2nd dessert tonight, because I have a trifle in the fridge?”.

I nearly died of shame.

Other way around: I was holding ex-husband’s phone while he was driving me and the kids to the airport. Text comes in from a “work colleague” asking if we’d left yet.

It was then that I realised the marriage was over. 👍

Not me, but a friend we’ll call Bob.

Bob, some friends, and I went out one night to watch a show in town. Afterwards, we decided to go get some drinks and decided to carpool.

Bob’s phone was dying so he asked if he could charge it on the way over with the car charger. While it was charging, it had apparently connected to the car’s speaker system and, without a warning, the car read a new text message out loud to all of our surprise:

“Hey baby, it’s been a long time since you came in my mouth. How about we hook up tonight so I can taste that juice again?”

Needlessly to say, he was mortified and the rest of us rolled with laughter on our way to the bar.

14. It doesn’t get more awkward than that.

A couple of years ago met a guy from Tinder in a pub for our first date. Things were going well, we were having a laugh and flirting. After about an hour I took out my phone to show him a funny meme and up popped a notification from my new period tracking app saying “Today’s the day! You’re ovulating!”

I swiped it real quick and I dont think he got a good look at it but I was still worried he’d think i was some child-obsessed weirdo who timed my dates so random Tinder guys could impregnate me. I turned off ovulation notifications after that.

Chatting to a guy in a bar, handed him my phone so he could type his number in. At that moment a message pops up from my friend sat several tables away saying “shag him.”

Left my phone on the kitchen table and went to pee.

My parents were making dinner and my mum saw the “wanna f**k?” notification from my bf pop up.

I was confused when I came back in the kitchen and my parents were laughing. Thanks Iphone.

I was ordering food off of doordash on my exes phone when she got a text from guy saying he couldn’t wait to see her that weekend. She told me she was going to see her mom.

Not my notification but I sent to my best girl friend “you’re right, future husband’s dad is weird. And a little racist”. And her future husband saw the text.

Luckily he laughed and agreed with me. But I was so embarrassed that he saw it.

9. People should really be more careful.

I have a friend who is an EMT that had a similar experience. When he went to work, he’d often take his iPad with him to play around on between calls. This time though, his girlfriend had forgotten to sign out of Facebook on it.

So all of a sudden, the iPad starts going nuts with notifications. He looks and finds the reason is because his girlfriend was flirting and arranging a date with another guy. He didn’t speak to her for the rest of his shift, and broke up with her when he got home, sending her back to live with her mother.

She made a bunch of threats that she’d kill herself and she’d self-harm if he didn’t stay. He told her too bad, wasn’t his problem anymore. Unfortunately, he still has to deal with her as they have a daughter, and he tried to get custody but failed. He does his best for her anyway though.

Border patrol had my phone and my buddy sent me a text in which he jokingly said something like, “what makes you think they’ll let you in this time?” or something like that

While my friend was using my phone, my mom texted me “Remember not to have sex with Thomas, he has chlamydia.”

My SIL was staying with me for a week, which I wasn’t stoked about. My sister knew about it and messaged me “How are you dealing with (SIL’s name)? Do you need to pretend to have a nap again lol?”

Unfortunately my SIL was borrowing my tablet at the time and saw the notification pop up. She hasn’t stayed with us since.

I was working at an Apple store, helping a woman with her phone.

This woman was older-, as sweet as could be, she hands me her phone, and just as she does a message pops up.

It’s a a picture of a toilet full of s*%t and the message reads “how many times do I have to tell you to flush the f**king toilet?!”

Not knowing really what to do I just hand it back to her and tell her she has a message. She takes the phone, half smiles, closes the message and hands it back saying, “sorry about that sweetheart, my daughter can be a bit of a b**ch.”

4. Everyone else backed up realllly quick.

3. What are friends for?

This happened to my friend, I sent him a text of a wet cat and said look at this wet pu**y, while my other friends mom was holding his phone.

She just awkwardly gave him his phone back.

New job alert from ZipRecruiter while at work.

I was the one doing the sending. I moved to Japan a couple of years ago and early one morning I was at a market and saw a tanuki statue that had the full c**k’n’b**ls on display

I took a picture of it and thought it would be funny to send my brother a message reading “UNSOLICITED D*%K PIC!” then send a pic of the tanuki statue.

Little did I know, halfway around the world, my brother was doing some late evening car shopping. He had recently been in an accident that had totaled his car and was in the market for a new one.

He had handed the car salesman his phone so he could show the guy the pics of the damage to his car and the guy was looking through them when the words “UNSOLICITED D*%K PIC!” popped up on the screen.

My brother said the guy nearly dropped the phone trying to shove it back in his hands.

I am cringing so hard, I swear. Ugh.

Has this ever happened to you? Tell us the story in the comments!