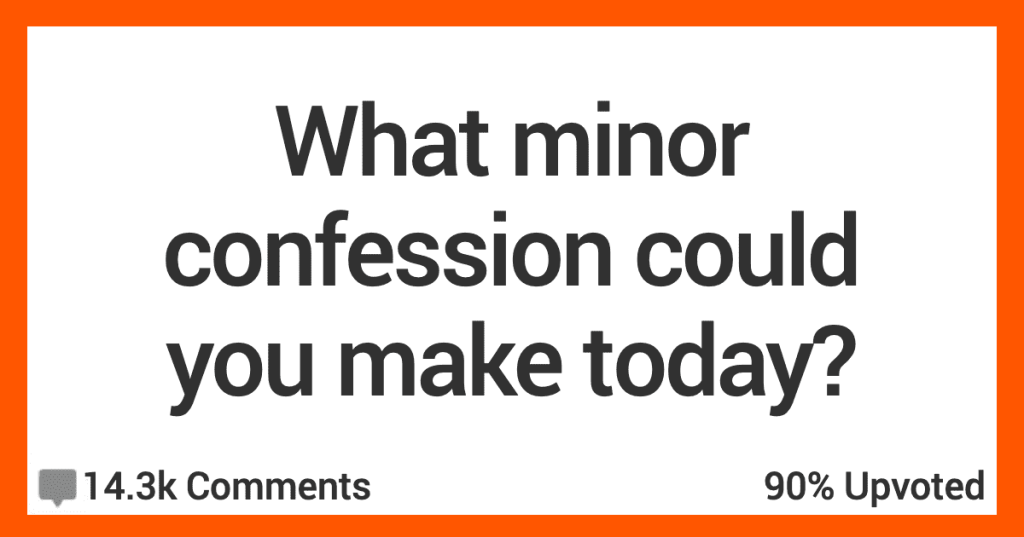 18 People Get Real With Some Daily Confessions

We all have things that we could stand to get off our chests on a daily basis. Like, it’s nothing huge or earth shattering, but it’s not something we’d want to necessarily confess to the people who know us in real life, either.

Enter Reddit, where you can say whatever you want without judgement or fear of reprisal (mostly) – and these 18 people aren’t going to miss out on their chance.

I accidentally, absentmindedly, took one of the red hand baskets from Target nine years ago and never returned it. I had put my bags back in it and carried it out to my car like I would have pushed a cart out. I put the whole thing in the trunk and realized when I got home. Side note, I’ve been medicated for ADHD since then.

I use it all the time. Yardwork, cleaning supplies, I’ve taken it on vacation more times than I can count. It’s super convenient and I just can’t part with it.

I just really like talking to him, he’s cool

I’m naked right now and have no plans to get dressed in the immediate future.

There’s a heat wave where I am, and I live alone in a 19th-century house with no air conditioning. I got out of the shower an hour ago, considered getting dressed, then thought, “What’s the point?”

Update: Now commencing day two of my birthday-suit project. (I did put on a pair of shorts to sleep just in case there was a fire or something that would make me run outside in a hurry.) The weather is just as hot today, and I have nowhere I need to be, so why not?

15. There’s no accounting for taste.

I normally buy the Top ramen that comes in a 6 pack for like $1. I decided to “splurge” and try more expensive ramen, so I bought Nissin Raoh “King of Ramen” ramen for $2 for a single serving.

14. Not one redeeming person.

I loathe every single person other than one at my current job, and nothing gets me through shifts more than the knowledge that I only have 4 more days there

I haven’t told my mom I quit my job. I’m going on vacation and she is asking how I can do that with no vacation hours left. (lost all the hours cuz of covid last month).

Edit: to help clarify, my mom and i work for the same company, so i used her as a reference when getting the job.

I try on shoes at an upscale store nearby with no intention of buying. I snap a pic of the box information, look up the shoes online, and buy the pair for half the price elsewhere, or better if they’re on eBay or something.

Also, I earn a solid income but buy almost all my clothes at thrift stores. I can’t tell my mother any of this or she’d be horrified.

I wasn’t sick today. I had a hangover.

Do confessions have to be bad?

I’m 3 days sober, struggling, haven’t had anyone to talk to, but I’m here and I’m doing great.

I’m so tired with what I’m studying at the university and not because I don’t like what I study but because the study center where I am is so mediocre, last week I heard a teacher say “I didn’t teach you anything because you already know a lot” and just wtf is that mindset?

I feel like I’m paying for a diploma and I hate that.

8. I suspect this is my husband.

When no one is watching I’m completely useless.

I will lay in bed for 24 hrs without even eating or drinking, just scrolling through Reddit and TikTok.

But when there are others around I can be the most productive, healthy, and energetic person you’ve ever met.

I don’t work with special needs kids because I love it, or because working with them is the right thing to do. I don’t love or care about them any more than I do regular people. When they graduate and leave, I only miss them in the slightest possible way. Like the occasional thought about them that brings almost no feeling.

I do it because I am good at it. I can stay emotionally un-invested, which keeps me calm and patient to extreme degrees. It also makes me a rock, which I feel is very helpful to them.

I play the part about caring so much. When people say stuff like that I just say thank you, and its such a joy working with them.

In the end its just a job I am good at, so I keep doing it.

I’ve recently realized I mirror the personality of who I’m with at the time.

Surely there’s a way to fix this

5. People actually do this.

Get in my car and drive somewhere.

Tell people I’m leaving and will be back, but not telling them where.

Come back after a few weeks.

I know damn well I couldn’t afford it, but it’s been a persistent thought of mine for months.

I am happier when I am alone virtually 100 percent of the time. It’s not that I don’t like people, I have a few friends I see at least weekly, and I’ve been in a relationship for over two years now.

I just prefer being alone, there’s no expectations on me, and I don’t have to worry about how something I do will be perceived.

I’m never fully comfortable when people are around.

i struggle to find a good balance between overthinking and reflecting

If I were to write off every single person that did something I didn’t like, I wouldn’t know anyone. To be a social adult, you have to compromise on what you’re willing to tolerate to some extent.

And I feel guilty for not realizing this sooner.

I can’t figure out if I want to go out and meet people because I’m supposed to want to or if I’m happy to become a shut in.

I took a WFH job and can have my groceries delivered. I’m basically Sandra Bullock in the Net at this point and I socialize more online than I do IRL.

People are the greatest, don’t you think?

I’d love to hear more of the same, so please, take advantage of the comments!