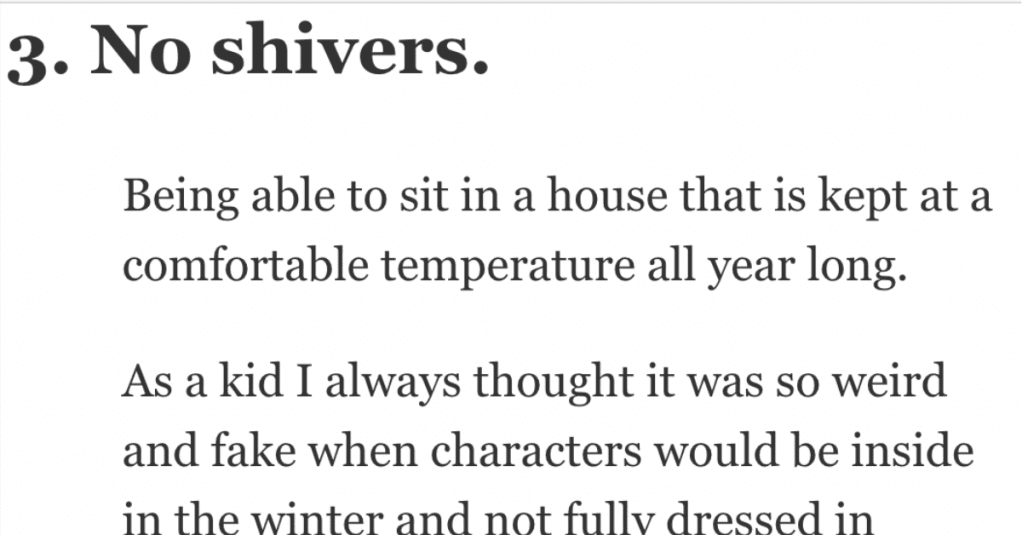 18 Things People Say We Don’t Realize Are A Privilege

Look, I know that discussions around privilege, what that really means, and what counts can be completely fraught these days – but that doesn’t mean we should stop having them, right?

It’s important to to our due diligence in understanding this concept and how it applies to us and our lives, so if you’re curious what actually qualifies, here are 18 things you might not realize signal privilege.

18. Having a Western passport.

It’s funny how most Westerners say “dude you can travel (internationally) cheap, and do backpacking”, could be true for them but they’re forgetting to look at their shiny passport.

For us third worlders, even if we can afford it and richer than these cheap backpackers, we have to prove to visa officers and immigration our net worth to afford that travelling. Heck a backpacking reason will raise a red flag to most of them.

The ability to actually be a kid when young. It’s heartbreaking how many children have to grow up / are hardened before they even hit puberty.

You can tell a lot about someone if you ever hear them say “I wish I could be a kid again”. I wouldn’t go back to my childhood for all the money in the world.

Having caring parents who support you no matter what.

I didn’t have anything like that, not even remotely close, until I was almost 30 and that was just a few coworkers who treated me decently. Out of my family I had 2 aunt’s like that but they lived far away and I only saw them maybe 3 times a year so barely knew them. Spent my youth treated like crap or hiding in the woods….

Today I’m a backwoods hermit with a lot of issues

An empty cabinet causes long term scars. Imagine being 7 and opening the cabinet and seeing it completely empty, not knowing when your next meal will be.

Childhood food programs are extremely important, f**k people who vote against them. These children didn’t do anything to deserve this.

Hot showers. The best thing ever, which everyone takes for granted.

I live in my van, so hot showers aren’t something I get every day. During COVID when gyms were closed I went 3 months without a hot shower.

Having a body where everything works properly.

The healthy wear a crown that only the sick can see.

I can’t remember who wrote that originally, but it made such and impact on me I plan to spread it like wildfire.

Not having glass or barbwires over every wall, not having bars over every window, leaving the door unlocked at night and most likely being fine, etc

Having a brain that works properly

I’m from Venezuela and here’s the things American consider normal that is a privilege here:

Having a car: I’ve noticed that in the US even poor people have cars, here is pretty damn expensive to have and maintain a car and there’s no credit option.

Electricity every day: here power goes out a few times a week. In the US it only goes out when there’s a tornado or something like that.

Sanitation: here nothing has an actual valid health certificate, unless it’s imported we don’t know if what we’re eating or the water we’re drinking is apt for consumption. Food in America has official certificates.

Having a phone: there’s rarely an American without a phone but for someone who makes less than 100 bucks a month is pretty hard to get a phone so there’s many people who don’t have a phone here and I believe in many third world countries.

Living alone after 18: Here people can rarely afford it so they will live with their parents at older ages and it’s considered normal. Sometimes if the backyard is big enough they’ll just build a house themselves for when their children get married so they live there with their partner and children. Living alone at 18 or even at 20’s is rather uncommon and a super privilege here.

Making fun of the president with no consequences: in the US I remember the media made fun of Donald Trump and it was ok nobody got arrested, but here if you make fun of the president on public TV or a famous YouTube channel you’ll go to jail for sure, they call it “hate crimes”.

Having animal services: As an animal lover I really hate that if you see animal abuse there’s not a number you can call and police won’t come, you have to literally take evidence and take it to court or send to a contact that works in the government, and according to the law the animal abuser just gets 48 days in jail (you can push for more but you’ll probably have to bribe the judge or have a friend in the government).

Clean streets: People here are worst than animals, the streets are littered everywhere except for the rich areas. In the US the streets seem super clean in general.

Buying clothes and items often: Here we spend many years using the same clothes as it’s expensive to buy all the time, but Americans will throw away a shirt or a pair of shoes they’ve used for a few months and say something like “it was completely destroyed already”.

Having good looking houses: The houses of poor people here have black mold on the walls, the roof is asbestos or something similar, the draining system is almost rotten and the house structure is still standing by the sheer power of faith.

Eating expensive stuff: I’ve noticed Americans will complain a lot if they don’t have certain meals but here we just eat what we can afford, for example things like honey, syrup, cheddar cheese, diet toasts, yogurt, chocolate and that kind of stuff are luxuries here.

Having sex: This one is kinda funny but it’s true, since Americans have cars and often live alone it’s easier for them to have sex. I’ve been struggling with this for a while because at home there’s your mom, your grandma, your siblings, your little cousins, etc. There’s literally no privacy, so people with more money are the only ones who can have sex whenever they want.

Walking outside at night: If you do that here you’ll likely get robbed or even killed, after 7-8 pm the streets are deserted. In USA or any other first world country unless you’re in a specifically dangerous area it’ll be fine to take walks at night.

Water everyday: in certain areas here people haven’t had water for weeks or even months. In the US water is expensive but at least everyone has it.

Travel papers: if you’re American or European you can quite literally travel anywhere with very little effort, getting a passport and VISA here is a whole struggle you’ll have to dedicate time, money and effort to get.

I could go on and on but I wouldn’t finish today.

Having a safe place to sleep.

I’m very privileged to have a safe place to live and I understood it more since the start of the pandemic. Not having a safe, stable, comfortable home has to be hell when you are on lockdown. My partner and I get along and that has been more important than ever.

knowing when your next meal will be

Food insecurity is terrifying. I have been fortunate that coming from a poor family I always had food. Thinking of all the kids who were out of school due to covid that were on free and reduced meals breaks my heart.

7. Buying what you need.

Buying groceries without having to carefully consider prices.

Getting as much sleep as you need.

Being able to quit a job without fear of losing financial stability.

To have people around who can and will help.

Criticizing your own government.

6. You don’t want to imagine life without them.

I haven’t had a toilet for 3yrs now (I live in my van) and sometimes finding a bathroom is a real pain.

And in the same breath cities complain about homeless pooping/peeing in public, they also closed the few public bathrooms that were available “because of covid.”

And emotionally+financially stable parents that care about and support you.

Okay so I spent a good chunk of my childhood in developing countries as did my parents:

Cops aren’t bribable <- such an anti-west concept google is telling me it is spelt wrong
People in government are not bribable for small things – drivers licence, extension to your house
Your power is always on
Your water is always on
Some places in the South of the US might relate but you do not get BUGS, BUGS, EVERYWHERE
You need to be careful where every you eat as food poisoning is common
The gangster are more powerful than the government
You are hyper aware of how you speak to gangsters or the government as they can fuck you
I can leave my window open
I can get probably drunk in public
Basically stability

Being able to sit in a house that is kept at a comfortable temperature all year long.

As a kid I always thought it was so weird and fake when characters would be inside in the winter and not fully dressed in multiple layers with shoes and a jacket.

My parents are still proud about the lack of heating in their house. They will leave the doors and windows open in the middle of winter (doesn’t snow here), and think I keep my house way too hot (18-20deg C).

It was amazing the first winter I had a heated house. It was like shit, no layers? No huddling around a piddling heater? Or getting into bed early to warm up?

2. Knowing food is coming and when.

Being able to ask “what are we going to eat” and not “are we going to eat” I cannot express how greatful I am to have a fridge full of food everyday because I know that in other parts of the world some people go days without eating and sometimes have to resort to eating rotten food.

It’s awful to think that such terrible conditions exist. I’m just so happy to be privileged enough to have better living arrangements. I just wish other Americans could see how lucky and privileged we actually are.

1. Sadly, not everyone has this.

Having tap water. Forget about drinkable.

I’m from India, and when we were younger we lived in houses that didn’t have running water. We would walk up a flight of stairs with buckets of water to fill up our water drum.

As we got more “settled” in life, only then did we realize how luck we actually are. I don’t care about drinking tap water. Having water running out of a tap feels so wonderful. The feeling of not walking a bucket of water up the stairs at 5.30 in the morning was such a relief.

Well, there you have it.

The comments are open, so let us know there whether you agree or not!