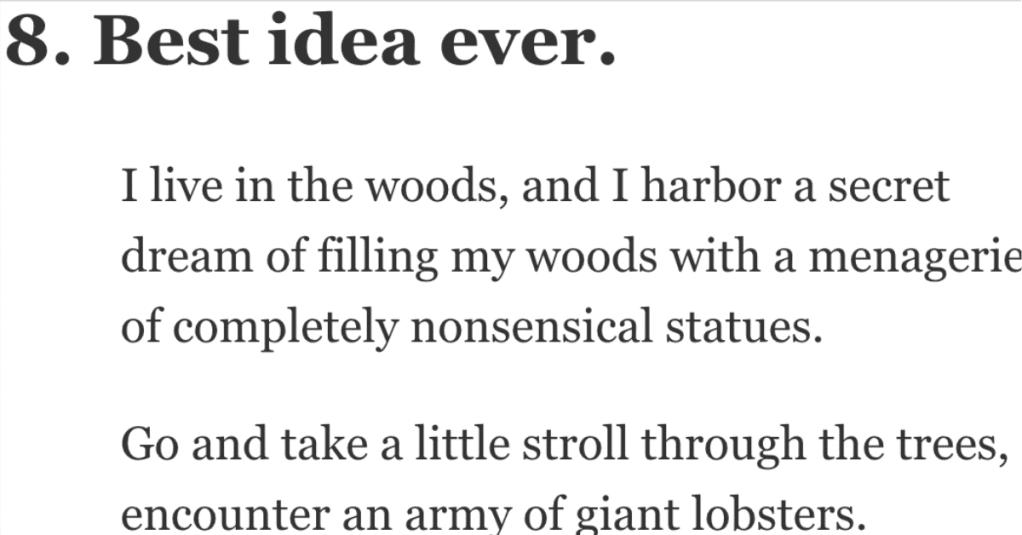 I think that most of us have fallen into the trap of imagining ourselves winning the lottery at one time or another, even if we don’t even play the lottery on any kind of a regular basis.

It’s a fantasy, you know? What would you buy with a bunch of cash? What would be your splurge, and how would your life change?

These 19 people are doing just that, but they’re specifically ruminating on what “useless” purchase would be their first.

Does paying off my student loans count? Cause my degree turned out to be pretty useless.

What’s the difference between a pizza and an English degree?

The pizza can feed a family of four.

I would buy a house with a lazy River in the backyard. Just float along all day.

I hated the city, but when I went to Atlantis in Dubai we found out the whole park is just one massive lazy river. You get in your tube and roll down the river and every ~50 feet there’s an automatic ramp to take you up to the next slide. You never leave your tube, and you can pick and choose which slides you want to take and which ones you just want to pass.

The best water park I’ve ever been to by far.

17. Laundry is for suckers.

One of those great big amethyst geodes you see at gem shows. Always wanted one of those…

I saw a coffee table at a gem show where the top was a giant amethyst geode slice, I would buy that. It looked so cool!

Giant Glass Dolphin that blows vodka out of its blowhole.

tbh candy bars are pretty useless, but dang I love their one good use.

Wall sized aquarium for my house. I’d love to keep sharks and whales but it would be unrealistic and stressful for them, so I’d settle with colourful fish.

So clearly the answer is to build a subaqueous house on an island in the ocean with a large glass wall and an artificial reef right outside. Ethical sharks and colorful fish, perfect for all your lottery winning spending.

12. I just want someone to massage my scalp.

Getting my hair deep washed every week.

My husbands grandma did that weekly and tbh it sounds nice.

I have always told my husband if I had more money than sense, someone else would brush and wash my hair for me!

11. He’s really thought this through.

I want a cold water dispenser on my desk. It has to be connected to the water line, filtered and cooled. Ideally it also has that thing that automatically knows when the container is almost full.

My new lifestyle would be to live 4 weeks in a different city, then 1 week at home. In each city, I would stay in a Luxury Airbnb or a five star hotel.

I would hire a professional soccer coach. I’m talking someone that trains pro players. I’m Arab and I’m tired of not being good at soccer, just a few months of lessons and I’ll be able to participate in pick up games and have fun.

I would also hire singing, guitar and piano instructors. Singing would be the toughest because my voice sucks, but I figure with time I can be good enough to sing a song if I want to reference it. That’s how bad I am today.

I’m blowing it all on a castle. No, not one of those fairy tale mansions from the 19th century robber barons called ‘castles’.

I’m buying Au Train island in the Upper Peninsula to be specific.

When the feds finally come after billionaires to pay their fair share, I’m running to my island and sealing the gates behind me.

So I can get my affairs in order and pay my taxes. What were you thinking I was gonna do? Hide from the IRS? They can breach any castle lmao.

9. They actually make these.

A giant hamster wheel for my cats. Nothing else to add. Just a huge wheel for my 2 cats. My male needs an outlet. I swear he has adhd.

I live in the woods, and I harbor a secret dream of filling my woods with a menagerie of completely nonsensical statues.

Go and take a little stroll through the trees, encounter an army of giant lobsters.

A giant inflatable Grinch for my front yard. I’ve wanted one for years, but I know as soon as I buy one the a-hole teenagers across the street will vandalize it.

A trebuchet. Because when my tank breaks down I’m gonna just hurl it into the next county.

Far superior to a catapult.

Maybe not exactly “useless” in the way people are thinking (the way the question is asked makes me think by “useless” they mean “stupid/wasteful” but I’m thinking in terms of things that are fun and only for the purpose of having fun), but do vacations count?

If I had that much money all to myself, I would 100% rather have a regular sized house/car and spend the money on experiences instead.

The idea of having a normal life but knowing that I can just decide to take the day off and go to DisneyLand or treat myself to a fancy dinner whenever the hell I want to is a fantasy I’ve had since I was literally a little kid. I get that those aren’t useful things because they’re not things I could USE like a car/house/purse/etc, but I’d definitely be happy:)

3. That could come in handy.

Well this stuff is only useless if there isn’t some sort of apocalyptic event that happens in my lifetime.

That said, I’d go full prepper and bury myself a bunker in the desert with tons of food and water stored away and decked out with solar panels, a garage full of electric cars, and a stash of every sort of modern electronic equipment available in vast quantities.

So this would be a huge waste of money if there’s never an apocalypse. But it would be very valuable to me if there happens to be one.

2. The coolest house on the block.

My own arcade room with DDR, claw machines, shooter games and such

Go on a road trip to Tucson, hit the gem & mineral show, and buy everything that caught my eye. I’d probably have to rent a U-Haul to bring my loot home.

These are all solid choices, I admit. I don’t know if anyone other than my mother would consider travel useless, but that’s probably what I would do.

What about you? What useless thing would be at the top of your list? Let us know in the comments!