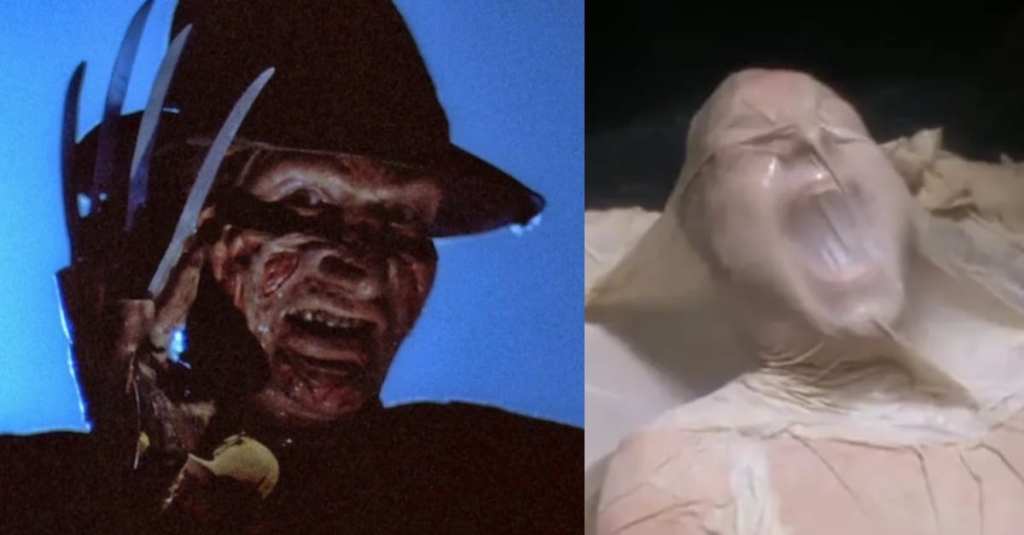 20 Horror Movies That Are So Creepy, People Said They Couldn’t Sleep

Have you ever seen a movie that you thought was so disturbing, so grotesque, that you lost sleep over it? I saw the original version of The Evil Dead when I was about 7 years old, and it was pretty traumatic.

But I also loved it, and I’m a horror movie fanatic to this day!

In this article, people share the films that bothered them so much they kept them up at night.

These responses come from the Buzzfeed Community.

“I didn’t sleep with the lights off OR shower with the curtain fully closed for weeks after seeing this. I was forced to watch this during a sleepover, and it was the last time I ever let myself get pressured into watching a horror movie. I ‘noped’ the heck out of there so hard after the movie ended, I even called my parents and faked being sick to have them come get me.”

“This movie literally made me pee my pants. I was part of a film club at my high school, and we watched this for Halloween. I’m usually a wimp about stuff like this, but I wanted to watch it and get over my fear. Bad idea. When it got to the part where the family was standing in the driveway and they suddenly moved, I actually screamed. It wasn’t until the period ended and we turned the lights back on that one of my friends yelled, ‘Hey! Did you pee your pants?!’ The whole class saw and I had to tie a sweater around my waist for the rest of the day! I still haven’t lived it down.”

“I watched the 9 p.m. showing of this with some friends and literally stayed up all night, cuddled in a blanket, sitting in a well-lit room, watching Bob’s Burgers until the sun came up.”

“It was all funny and laughing until the movie was over and my brother and I realized we were alone…in our house in the middle of the woods…at night. And we couldn’t figure out what kept setting off the motion detector light in our driveway. Yeah, neither of us got any sleep that night.”

“Spoilers: There’s a terrifying scene where a woman gets hit by a car and her face gets deformed, but that’s nothing compared to the twist ending. I had to look at pictures of dogs on my phone for over an hour before I could even think about trying to go to sleep.”

“The word ‘disturbing’ doesn’t even come close to describing it. It shook me up for a while!”

“I saw it with a group of friends in the theater when it was first released. It was so disturbing, I had to sleep on my mom’s floor that night. I was 16 years old.”

“The soundtrack and premise work together to create a very unsettling atmosphere for me. I watched it late at night and then went to sleep, but then my dog started barking for no reason at, like, 3 a.m., and I woke up thinking the entity was outside my door. It was pretty hard to sleep after that.”

“The ‘actual footage’ shown next to the movie footage freaked me out so much that my then-boyfriend (now-husband) had to stay the night because I was NOT about to sleep alone. I have yet to watch it again.”

“I saw this when I was 10 and was scarred for, like, six months. Not being able to sleep was bad, but I was even more afraid to shower because of the scene where the hand grabs Sarah Michelle Gellar’s head while she’s washing her hair. I would always wash my hair with my eyes wide open and risk getting shampoo in my eyes because I was too scared to close them.”

“This was the very first horror movie I ever watched. I thought it was going to be fine because I had watched a friend play through the game, which didn’t have the best graphics in the world. Anyway, I had just turned 15 and a bunch of us were at my friend’s place for her birthday, and we watched it. To this day, the air raid siren sounds still freak me right out, and it’s been nearly a decade since I watched it.”

“I love horror movies, but I was so freaked out after I watched this, I drove to sleep at my parents’ house and left my boyfriend and my roommate at my apartment.”

“Spoilers: At first I was making jokes about a doll walking around and how ridiculous it would look. Then you find out it’s a psycho living in the wall. That was more disturbing than I could handle, and it still freaks me out to think about that.”

“This was the very first horror movie I ever saw. I was having a sleepover with a friend that night, but we did not sleep At ALL, and neither of us would look into a mirror for months afterward.”

“No exaggeration, this movie nearly put me in therapy. I watched it not knowing what it was about, and I already have an irrational fear of aliens. I almost had a heart attack.”

“It’s about this girl who goes into this ‘game’ to win money, and when she gets there it starts off normal, but then it gets weirder and weirder, until the dares are dangerous…and eventually start killing people. I watched this one night and COULD NOT stop thinking about it when I tried to go to bed.”

“The kids in that movie were both unbelievably cruel AND realistic. To be a stranger in a strange town and to then be targeted by kids who are protected by their parents is actually pretty frightening. It stayed with me for a long time.”

“It’s a surrealist film about the story of creation, and it’s pretty much just those Scary Stories to Tell in the Dark book illustrations by Stephen Gammell come to life. Need I say more? It’ll give you nightmares for life.”

“It felt so real and so heartbreaking for the victims in the movie. I couldn’t get it out of my mind for weeks, and it definitely caused me to lose some sleep.”

“I don’t even remember watching the movie as a child, but I had nightmares for years that there was a giant Freddy Krueger living under the street in front of my house. It was terrifying. I even woke up screaming ‘Help’ one time, and it scared the hell out of my mom and stepdad.”

Share the movies that have kept you up at night in the comments below!