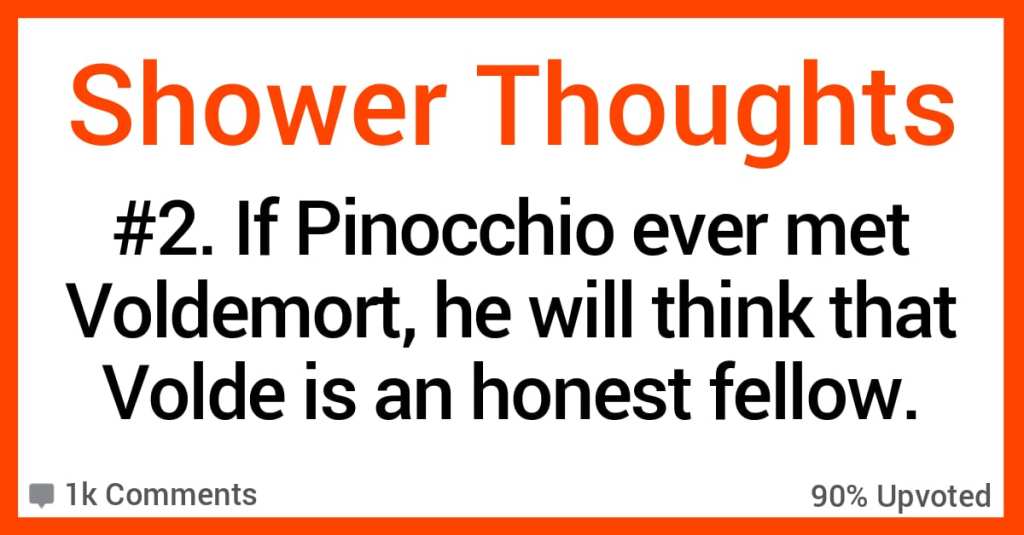 Many people claim, at least, to do their best thinking in the shower.

I have to say that, as an author, I’ve worked out quite a few plot snarls in there, but now that I’m a tired mom, mostly I just stare at the wall, listen to my audiobook, and wonder how long I have before one or both of my kids interrupt me.

These 20 people are getting some good thinking done in there, though, and I’m loving their deep shower thoughts.

20. There’s a job out there for everyone.

In Sales, the customer is always right.

In Tech Support and Engineering, the customer is always wrong.

Humans have concluded that it is easier to colonize Mars than to deal with other humans on earth to make it better.

Someone is the most average person on the planet.

17. Maybe not hours, but it took some dedication.

It must have taken men hours the remove the fifteen layers of clothing on their partner before s^x in the 1800’s.

16. The bookend for the one for being born.

It is strange how we are all awarded a certificate for dying.

A broken clock is right more often than a clock that’s one minute behind.

14. Absolutely never thought about it that way.

Spicy is not a taste, it’s a sensation of pain.

Our bodies are weird, we can be struggling to stay awake and drifting off to sleep on the couch but as soon as we go to bed, we struggle to fall asleep and are wide awake.

12. I think this is how weird horror movies come about.

We consume solids and liquids through the same hole, but dispose of them in two separate ones.

11. It really should have gone to your mother.

Your birth certificate is your first participation reward.

You know you’re f*cked when your favorite celebrity visits you while you’re in a hospital.

if everyone on earth died instantly, no one would care

8. Trouble does seem to find them.

The safest city is normally the one without the superhero.

7. You don’t care either time.

You’re neither the first nor last person to see your naked body.

A considerable number of “dumb jocks” were more likely suffering from post-concussion syndrome than low IQ.

4. It makes for an interesting physics problem.

Bed frame designers have to account for the force generated by f*cking.

3. We could save the Earth, if only we could come together.

If people are colored white, black, brown, yellow, and red, then people need to be thinking less about how different we are, and more about how we were clearly meant to be the next team of Power Rangers!

If Pinocchio ever met Voldemort, he will think that Voldemort is a very honest fellow.

It’s done because to really speak our language they know they have to add an unnecessary apology in there somewhere.

I really need to drink more coffee or something and kick this brain back into action!

What’s the best thought you’ve ever had in the shower? Add it to our list in the comments!