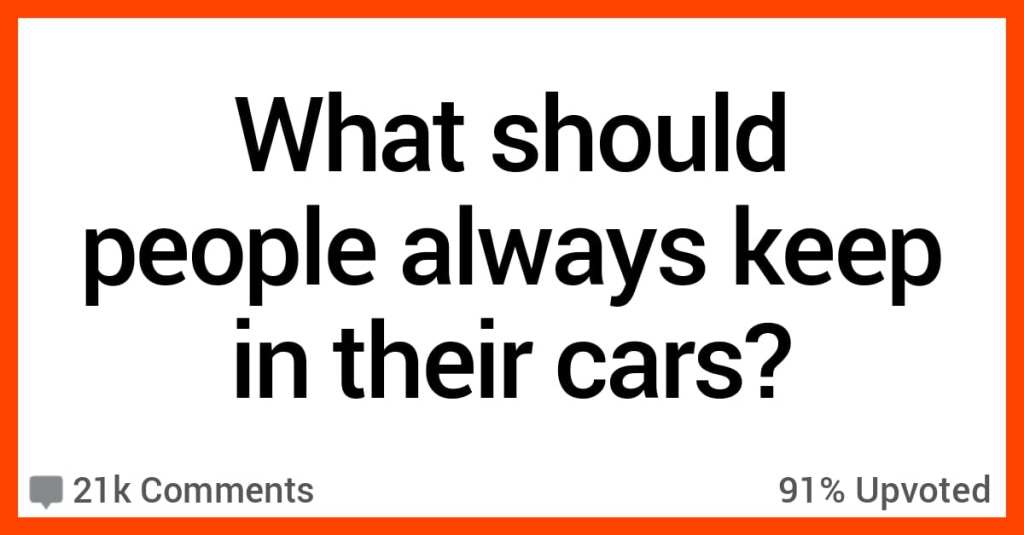 20 Things People Say You Should Always Keep in Your Car

I know that this is the day and age of the cell phone, so maybe people think it’s not as important to always be prepared as it once was.

That said, the Gen Xer in me thinks that you could have to improvise, still – your phone could be dead, the people you call might not be home, you might not have a signal, there could be a murderer watching you….

So, if you always want to be prepared for any eventuality on the road, here are 20 things people say you should never leave home without.

20. Sometimes you DO need cash.

I always keep a $20 bill hidden in my car in case I need to buy food, water, gas, pay a toll, etc. and don’t have a debit card.

About 2 years ago I was in the car with my parents when all of a sudden the gears stopped responding and smoke starting coming out of the front and back. We parked on the side of the road, opened the front and a piece (I think it was the battery) was burning.

It was only put out because a man who was passing by riding a motorcycle quickly stopped, took off his jacket, soaked it in water from a bottle that he had with him, and covered the fire with it. Turns out he was an ex-fireman. You probably shouldn’t always count on being that lucky.

Front and back dash cam. More vehicles should come with built-in cameras as standard.

I’ve seen a few posts of Teslas with their 360 degree camera coverage and it’s absolutely incredible.

Total peace of mind. Unless you’re a terrible driver, I guess, then it’d suck.

You get one for fairly cheap and the one I have also comes with a built-in seatbelt cutter at the bottom end.

I hope I’m never in a situation where I need to use it, but knowing I have it in my car gives me some sort of tranquility lol

14. Because it will always be raining or dark if there’s trouble.

I keep two headlights in my car just in case.

It has helped on numerous occasions while driving in the dark.

13. Important information to have.

Do NOT keep condoms in your car.

The latex breaks down under heat and are susceptible to breaking when you use them.

Other condom facts in case anyone here actually had the opportunity to a condom.

Keeping condoms in your wallet/purse makes them degrade faster (replace them every 3?? months I think).

Lipsticks and balms can also make them less effective too.

I carry a bat that has a flashlight in the end.

It also has a pulsing light feature to blind attackers

And then the bat part to whack attackers

11. A good scraper is worth its weight in gold.

Tool kit, jumper cables. Good snow removing tool, if it snows where you live, and deicer.

I’m paranoid enough in the wintertime to always have boots, gloves, water and a blanket too.

Toilet paper, Flashlight, Knife, WetWipes, Blanket, A can of Motor Oil, Jumper Cables, and a couple of dollars.

This is a kit I put together in every single car I ever had.

I live in a more urban area but frequently travel into the mountains for work. I throw in a gallon of water, a sleeping bag, and a change of clothes suitable for mountain weather.

A firefighter friend has pulled a number of dead bodies out of car accidents where the accident only killed the car – the people froze to death. One that sticks out is a pair of college aged girls heading up to meet friends at house in Tahoe. They drove up wearing bikini tops – in winter – and froze to death after sliding of the highway.

I don’t know if they had warmer clothes they just didn’t change into or if a friend had their bags in a separate car, but he was pretty bummed out about that one. If those girls had a wool blanket, sleeping bags, or coats they’d have been cold – but alive.

If you travel with your dog, a bottle of water and a drinking bowl.

I live in a desert community near Death Valley. One summer maybe 10 years ago, a woman and her 11 year old son were traveling the 30 mile stretch of desert between the main town and a smaller nearby town when her car died. There was and is still no cell service on that road and I guess no one stopped to help, so they ended up stranded.

They were only stranded for a few hours, but it was 120F and they didn’t have water. The son quickly succumbed to heat stroke and died.

Ever since that happened, I have packed a day’s supply of fresh water for each person in the car before any trip out of town. I have my normal emergency kit as well, but the water is something I have to be mindful of because I can’t keep it stored in my car, especially in the summer months.

No amount of technology or modern connectivity can replace good preparation for emergencies.

If a cop pulls you over, and you have upwards of ten live geese in your car, that officer really has to think about whether or not he wants to deal with that situation.

Another good thing that doesn’t really help with ALL accidents but can help some is some form of no-perishable/not quickly perishable comfort food, like potato chips and granola bars! Shock is a serious possibility in an accident and you may need something to help jump start you back into drive.

Some form of easy to swallow digestible that is familiar can really help with that. I always have a few granola bars and snack sized original lays in my glove box+center console and theres usually a box/bag of both in my trunk too.

I’d upgrade that to a -20F 0F/-20C sleeping bag. Still cheap, still compact, still good at any temperature, but so much nicer when its needed.

Blankets are important if you break down in a cold rural location, but also if you get too lit at the party you can sleep it off before driving home.

Lots of people saying “gas”; they might mean in the tank, but do not keep it in your trunk (or boot, whatever). It degrades and evaporates in 3-6 months.

Keep a gas canister with a little money inside: enough to fill it.

1.  Preferably one that doesn’t have to be plugged in.

A “spare” charger. One that you know it’s in good condition and will work on case of emergency. Chargers in a car tend to get beat up and fail.

I think I’m prepared now! Maybe not for the murderer thing, but everything else.

What would you add to this list? Drop your rec in the comments!