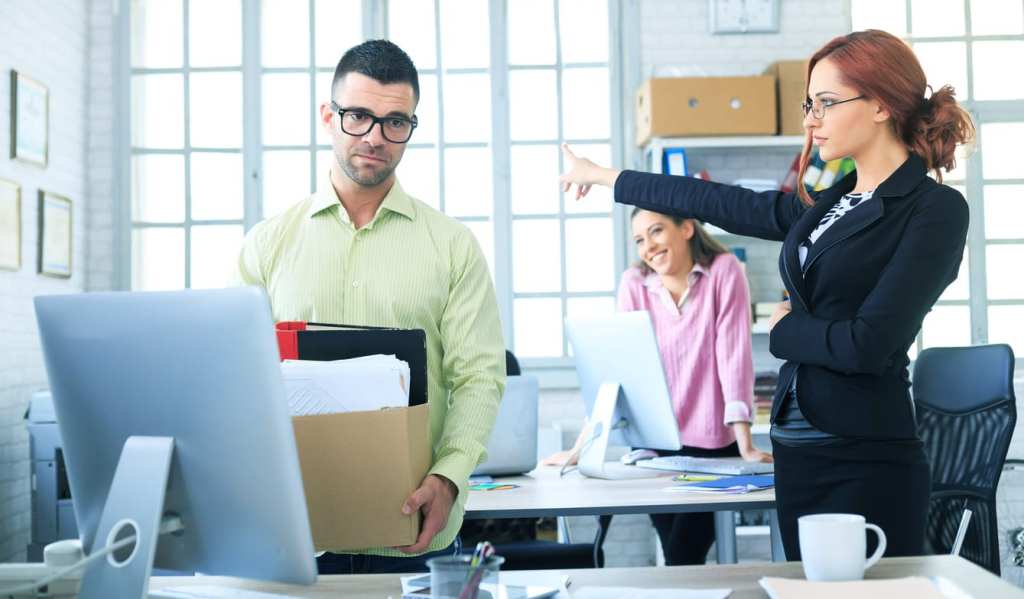 22 Stories of Employees Getting Canned for the Most Insane Reasons

At one point or another, we’ve all fantasized about going off on a boss or a coworker and crashing out work in a spectacular fashion, flipping everyone the double-bird as the door hits us on the ass on the way out.

Well…not everyone is given that glorious opportunity. And these 22 people did some pretty ridiculous crap and got themselves canned long before they ever got the chance to ride off into the sunset. These stories are an EPIC collection of the best (and worst) reasons people got fired from their jobs.

1. Gave Lohan a run for her money

“My favorite event happened right after Christmas in 2012. The grooming salon needed some extra help washing dogs, so I hired a sweet, young red-headed girl we will call Lizzy. Now, the head groomer and her assistant were a pair of mean girls and decided they didn’t like Lizzy, so they came up with a plan to make Lizzy leave. Lizzy had just gotten a nice new purse for Christmas, so the head groomer and her assistant decided, ‘Hey, let’s ruin Lizzy’s purse!’ When Lizzy found what they did, she came running to me crying with the most awful smelling purse in the world. Thankfully, the groomer mean girls weren’t too smart and did it right in front of a camera. Lizzy and I both sat horrified as we watched it. When I was firing the two girls, they told me the whole process: They decided to collect dog feces, an*l gland secretions, and old rotten Chinese food, mix it all in a baggie and let it ferment for a week. Then they poured it in the poor girl’s new bag. Both of these women were in their early 30s with children – Sigh.”

“I saw someone get fired for coming to work dressed in a dog costume a day before Halloween. He refused to go back home to change. This was an office with a casual dress code, but the employee had a history of erratic behavior. He left with a sad doggy face and his tail between his legs.”

“Had to fire a girl for sleeping with a client – at a homeless shelter.”

4. Not the brightest crayon in the box

“My dad had to fire someone who stole clothes and shoes from our store and wore them to work the next day.”

5. Keep your plans to yourself

“There was one time I had to fire someone because I sent him out on a job that was supposed to only take 2-3 hours to complete. Before he left, he mentioned to the receptionist that he was going to make it last all day. She mentioned it to me, and sure enough, he returned over eight hours later. Being dishonest with a client’s money is not something I was going to tolerate.”

“A manager at my store stole a bag that a customer had left on the counter. He completely denied it and I believed him. But the customer was sure he’d left it there and asked to see the video. I hadn’t seen anything odd, so I showed it to the customer. He pointed out the bag, which we watched until the manager of 10+ years appeared on camera, took the bag, and left. Idiot.”

“I had to fire this kid from a gas station I worked at after he asked me if I ever poked holes in rubbers with a push pin (as he proceeded to punch holes in said rubbers). I have no idea how long he was doing it for, he worked there for over a year.”

8. It was only supposed to be until he could buy it

“Manager at a delivery joint here, we had to let someone go because they decided to deliver pizzas in a stolen car.”

9. Maybe he was lonely

“In high school, a guy I knew stole a giant Ronald McDonald made of legos from the McDonald’s he worked at. It was one of those ‘guess the number of lego pieces’ contests. He got away with it, but later on he was busted for stealing boxes of hash brown wrappers with monopoly game pieces on them. Cops showed up at his place to arrest him over the hash browns. Lo and behold, there was Ronald in the middle of his room.”

“I once worked in a retail store where we all had our own access codes that allowed us to do stuff, and if our code didn’t allow us to do it, we weren’t supposed to be doing it. On his first day, during training, this guy managed to catch the General Manager’s code as he was typing it in and used it for about a week. Pretty much gave away thousands of dollars of equipment in the manager’s name. It was particularly stupid because he did it while he still had his trainee position, which required somebody to look over most of what he did if he wanted to give discounts, etc. If he had waited another couple of days, he would have been moved up to full staff member and could have given out most of those discounts anyway without anybody noticing or caring, but he just couldn’t wait to give his friends all the free swag.”

“One of my salesmen had a customer stop during a test drive so he could buy some drugs. On the upside, he did offer to share it with them.”

12. I don’t think that’s how it’s supposed to work

“At a 7-11, a sales associate’s landlord came in (she lived in the neighborhood) and told the associate that she was late on rent. The associate simply printed out a money order and handed it to the landlord.”

“They forgot to put cheese on a cheese pizza. Twice.”

“All of our lobsters kept dying off and it happened several times. We’re talking several thousands of dollars worth of lobsters gone, and this was even after cleaning the tank a couple of times in case there were some lobster hating germs in there. Turns outs, one of the overnight floor cleaners was staging gladiatorial lobster battles. Unfortunately, he forgot to wash his hands that were covered in floor cleaning chemicals, and that did not bode well for Spartacus and his armored brethren.”

“I was managing a restaurant and I noticed a new hire had really good tip averages the day before when I had been paying her out. I did morning cash out where I checked all slips against the information in the computer. The next day, I was going through her slips and noticed a – discrepancy. Namely that she had added a one in front of each tip and changed the total. How could I tell you ask? SHE USED DIFFERENT COLOR INK! She was fired and we refunded the money, but seriously, at least use the same color ink.”

“I worked in a fast food kiosk at an amusement park. We had a machine that cooked our burgers and toasted our buns, one of those ones where the food goes through on a conveyor belt. One day, it was raining. While walking to the kiosk, a girl got wet. So, logically, she took her clothes off and put them through the machine so the heat could dry them. Her shirt caught on fire and set the kitchen sprinklers off, then her shoe forced the two toasting plates in the bun section far apart, creating a large repair bill and her losing her job.”

“My manager once fired a woman for sun tanning during lunch. She went out to her car, stripped to her underwear and laid on the hood/windshield to sunbathe. Anyone looking out could see her. She didn’t think she was doing anything wrong since she was on her lunch break.”

“Couple of straight men got into a physical fight over a lesbian, on the floor, in front of customers. She was out, everyone knew she was gay. It started out as an argument over who she was friends with and turned into who was going to be going out with her in the future. That’s like idiots arguing over who’s gonna win the Nobel Prize.”

“I had to fire an employee one time because he decided to crap all over the bathroom and write his name with a smiley face. Side note: There isn’t anything wrong with him mentally, he just thought it was funny.”

“I was training her on our computer system and all she wanted to do was talk about the men in the office. When it was break time, she actually said, ‘I’m going up to the 4th floor and check out the meat up there.’ After break, I sent her into the fax room to pick up a fax and was told that while she waited for the fax, she perched her can on the edge of the table, arched her back, stuck her chest out, and fanned herself with some papers, all the while making suggestive comments to the mail room guy. She was sent home and told she didn’t need to come back.”

“I worked at a JC Penney. The store manager would come in really early to work and turn off the cameras. Then he would steal tons of stuff like purses, etc. He didn’t know that cameras also had an automatic on feature. They turned back on one day while he was still in the midst of his thieving and he got fired. It kinda makes me sad cause he was a really nice guy.”

“When I worked at Disneyland, I had an employee steal an entire ream of blank fast pass tickets. There’s absolutely no need or reason to have these, it’s just blank card stock the size of a business card. I caught him in the act and several minutes later, he didn’t have a job.”

Check out these other Did You Know reads.

23 Guys Share Stories About the Craziest Women They Ever Met