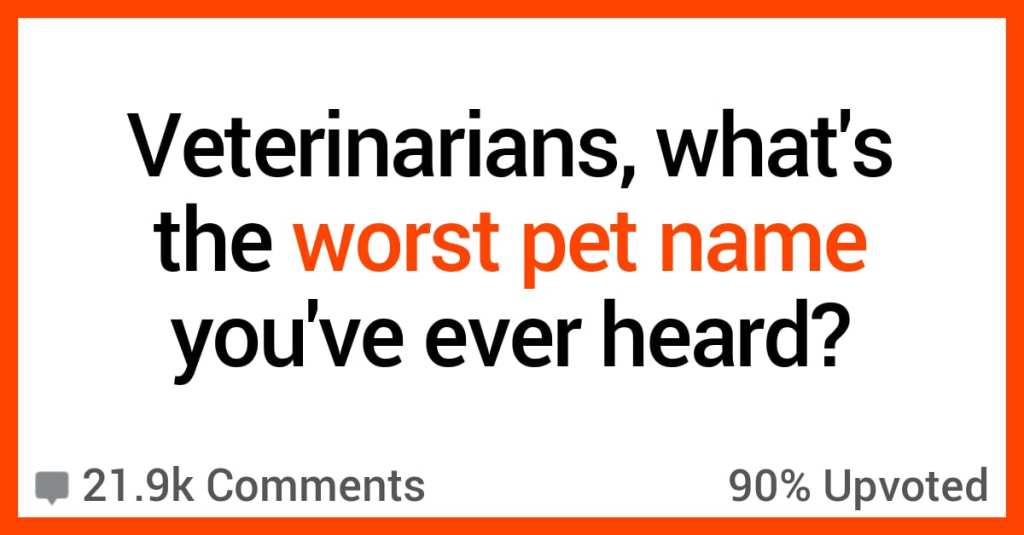 It’s a popular pastime to make fun of ridiculous, made up, not-pronounceable baby names for humans, but what about the things people choose to name their pets?

What about those poor dogs, cats, bunnies, and other animals out there with truly terrible names?

It’s high time we bring their plights into the light, and these veterinarians are on the front lines – so let them reveal 22 truly awful names.

The vet tech entered Popsicle’s name as “Popcycle” and I have never been more offended.

My cat doesn’t even have pedals or anything for riding what the hell.

21. That would inspire questions.

Envelope is the name of the cat in the Sir Charlie Stinky Socks books.

They are my son’s favourite books at the moment!

My old neighbors apparently thought it would be a good idea to let their 3 year old name their dog.

The dog was named Dump Truck.

19. Somebody didn’t think that through.

So I’m not a vet, but I’m deeply involved in the horse world. There’s a “discipline” called halter, and many of the horses are genetic atrocities to begin with. They’ve been bred to the point of uselessness.

When naming quarter horses, many breeders like to create a registered name that incorporates the parents’ names and bloodlines. So, somebody bred together the stallion Kid’s Classic Style and the mare Lookin’ Touchable. The best name that the breeders could come up with for the foal?

Yeah. That’s the best they could come up with.

In the South, I was in a waiting room with someone who brought their chicken named Tikka.

Sexy – for a chihuahua.

Our daughter was three when she named the all black cat.

I still have no idea why she named him that.

He does appear a bit chunky like a well fed raccoon now.

14. He earned those titles.

Not a vet but I took in a cat from a family named Lord Whimsalot III.

Yes, there were previous Lord Whimsalots. We nicknamed him whimmy.

One of my boys wanted to name one of our dogs Meat Stack.

(My son was 6 when we adopted the puppy).

Same kid wanted to name his brother Turtle Flower when he was born.

Needless to say he is not in charge of naming things in our household.

12. You might want to stay away from that cat.

There was once a guy that was selling his black cat. He called it “Ustaša”.

Ustaša was a group of soldiers from Croatia in the 1990.

They are taboo today because of the crimes/things they did.

because it had a beautiful face, she said.

10. Someone took their parenting role seriously.

Ex gf was a vet nurse.

She came across a cat in the system called Horatio Bradshaw Roadwork.

My brother in law named his cat Salad.

My cat’s name in John Hinckley, Jr., because he was a stray that stalked me for a year and killed things to give me as offerings.

7. I refuse to believe they realized what they had done.

I kind of hope they let their toddler name the cat, and the toddler just made a silly sound.

When I was little I apparently wanted to name our cat “tit” because I thought it was a nice name.

My roommate had a dog called Taquito and we once had to go to the emergency vet at night because it was having trouble breathing.

The dog goes in with the vet and maybe half an hour later a vet’s assistant comes out, goes straight for the latino looking couple at the other end of the waiting room and just asks them “taquito?” They were looking sooo confused and slightly offended, especially since the assistant kept repeating it when they didn’t answer.

My roommate was slow on the uptake with it being the middle of the night and just being frozen on the spot by the awkwardness of the moment, but she finally spoke up and said “Taquito is my dog”.

No one looked at each other for the remaining time we were there.

5. Sometimes people are hard to love.

Mom owns a vet practice so had a lot of these.

James Bond was my favorite doggy (Pekinese). He was hilarious.

There were so many Mittens, Fluffys, Spots and Buddy’s they got lost in the sea of animals.

Worst story was a rescued golden retriever who was so malnourished they nick named him Pancake. Sadly, Pancake’s kidneys were done so he dies 2 days after he was rescued by the local animal control. The two days I got to feed and spend time with him made it all the harder to realize he could have been saved if his family had let him go instead of leaving him chained up in the yard before they left.

I hate people a lot of the time.

Worst one was hands down “Tubgirl96.”

It was a name given to a sweet, young adult female cat.

The owners thought they were funny.

My first pet that I can remember getting was a fish when I was about three or four years old.

Senior year in vet school, all the students meet in the morning to review what’s coming for their service that day (surgery, internal medicine, onco, etc) and pick cases.

On the roster one day was a dog named Ni**er. This was rural Washington in the ’90s, so not the most enlightened place or time.

We had one Black student in our class – a smart and fiery woman. After some gasps from the students, she claimed the case and set about to read up on it.

The people and the poor dog showed up, and this student went in to get the history. I can only imagine the looks on the owners’ faces.

The student said the exchange went something like this:

I can’t recall how the rest of the case went, but this was a proud moment for our class.

1. You gotta stand up for your dog, man!

My dogs name was Freddie.

The vet put it in as Freddy.

I felt so ridiculous, and never told them ‘that’s not how he spells his name.”

What is wrong with people, y’all? I mean, come on!

What’s the worst pet name you’ve ever heard? Share it with us in the comments!