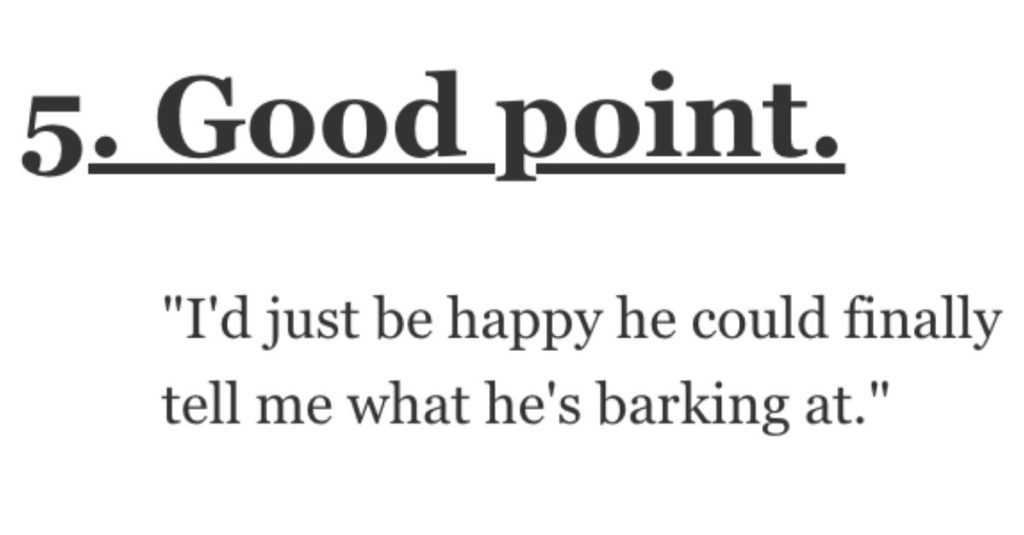 Who out there is ready to get weird?!?!

Now I want you to imagine this…your dog is basically your therapist and knows all your deep, dark secrets…

And all of a sudden, they have the ability to talk! Uh oh…this could be bad or it could be good.

So what would you do in this scenario?

Let’s get weird with folks on AskReddit!

“Have deep intellectual conversations with him every night.

He would understand all my quirks and what makes me tick.

“Honestly, it would be the best day of my life. My dog is the absolute f*cking best. No matter how low I am, he’s ready for a cuddle and a game of tug-of-war, to make me laugh unexpectedly, or to look at me with his big brown eyes and get to take him on a walk and shake off the fog.

I’d love to hear what he has to say. I’d love the chance to know what he really wants and be and to give it to him, and to watch him use another tool to be the absolute greatest, goodest boy.”

“Honestly, I’d just want to know what happened to her before I got her from a rescue.

And what made her so scared…”

“Monetize the f*ck out of a talking dog.”

“I’d just be happy he could finally tell me what he’s barking at.”

“Hey Taffy, if you don’t tell the other humans about my deepest darkest secrets, I’ll get you some Costco prime steaks every week and new tennis balls, plus we can go on more walks!

Just keep quiet about the drugs, guns, and unconscious bodies hidden deep in the basement, and the rewards are yours!”

“My dog is unquestionably loyal.

“I would really love to hear what my nervous doggo has to say about why he’s so nervous. Like please, why is the kitchen floor in particular so scary?

Why is that random shadow making you wary? See that potted plant outside? It’s the exact same one it used to be except I moved it over a little bit.”

“I will literally give you an entire bag of treats if you don’t tell anyone how much I mast*rbate.”

“Ask her what she wants to do before the cancer takes her.

Ask her what her favorite treats are. What human food she wants. Ask her if she’s in pain…

Ask her to tell me when it’s time.”

“I’d have a lot of questions.

“Why do you want cuddles when we’re both in bed, but not if it’s just one of us?” “I’ve allowed you to explore the basement. Several times. What do you hope to find that merits such crying by the basement door?”

“You’ve been so great I can’t believe you were returned to the shelter by your previous humans. What happened?””

“I’d ask him why he’s so obsessed with being in my room all the time.

I try to keep the door shut but he just sits and waits for me to let him in only to come back out when he realizes I’m not going in with him.

Also I’d ask him if knows how much I love him and how he’s pretty much the best thing thing in my life. Also just general health questions. He’s had special medical needs since he was  little.

Making sure he’s indeed feeling well, not just my thinking based on observations, would be an amazing relief.”

“We could sit down and have a discussion about how claw trimming is NOT the most terrifying thing in the world.

“Rename him “Old Yeller” and take him for the longest short walk of our lives.”

My dog is a godd*mn genius dog and she’d be be down for all kinds of mischief.”

“Explain to him how much I love him and tell him that I’ll never leave him. He has severe separation anxiety.

I’d wanna comfort him and tell him that he’s my world and even though I leave once and a while for work I still love him.”

I would ask it what it has against squirrels and try to persuade it not to bark when my wife is trying to sleep and I’m watching something on my laptop.

The days of my deep secrets were over by the time we got her. *sigh*”

However, he is absolutely convinced I will abandon him any day. He would probably just complain to everyone else how he carries the relationship and I am just not as invested.

Lots of trash talk, but none of it true and certainly nothing I would worry about. Though he may ne disgusted by my active s*x life and trash that too.

He is a really prudish dog.”

If it’s my old man doggy, I would cry uncontrollably. He’s been having a lot of medical issues and it’s been exhausting and frustrating so I would just want to communicate to him that I love him and that we’re doing everything we can and to please stop pooping at the vet’s office every single time.

If it’s my Great Dane, I’d have an honest to god discussion about him getting into trash cans and begging, as well as explaining that he needs to start being nice to other dogs all the time.

Not just when he feels like it. I’d also ask him why he stopped wanting to sleep in my room.”

“My dog is so stupid, he would tell me all the dumb sh*t he’s planning on doing before he does it.

“Oh I see you accidentally left that candy bar on the counter mom. Don’t worry, I’ll eat that for you.”

The he’ll be all surprised pikachu face when I put it away hahaha. I don’t think he gives a f*ck about telling anyone my secrets. That’s all human nonsense to him.”

“My dog loves me, she’s sleeping by my feet while I write this.

Firstly I’d just want to thank her for helping me through a dark phase of my life and prevented me from harming myself. She also has helped me get healthier, I say I take her out for walks but in reality she takes me out for walks.

But I need to also know why she slowly walks under shrubs and bushes and goes into a trance??”

“Buy as many dog bones as I could so he wouldn’t talk.

It’s been me and him since I was twenty.

I’m twenty eight now and I have made many mistakes that he has been a witness too.”

“Crack a few beers, sit down for a few hours and listen to my dog’s story!”

“I’m pretty sure she’d keep my secrets. I’m her fifth home in her relatively short life and she’s here to stay. I think we have a pretty good relationship.

Lord knows she hears a lot of privileged health information though. I work on call hospice and tend to talk to myself while doing paperwork. I live alone and pretty sure a regular dog can’t violate HIPPA.

If I explained to her that talking about all the work related stuff she’s overheard meant that I would lose my job and ability to provide chicken jerky, I’m sure she’d keep quiet about that much at least.

Now I love my cats but I think the tomcat would sell me out. It might be an accident though. He’s not the brightest animal I’ve ever met.”

Oh boy…now we want to hear from you.

What would YOU do if you suddenly found out your pooch could talk?