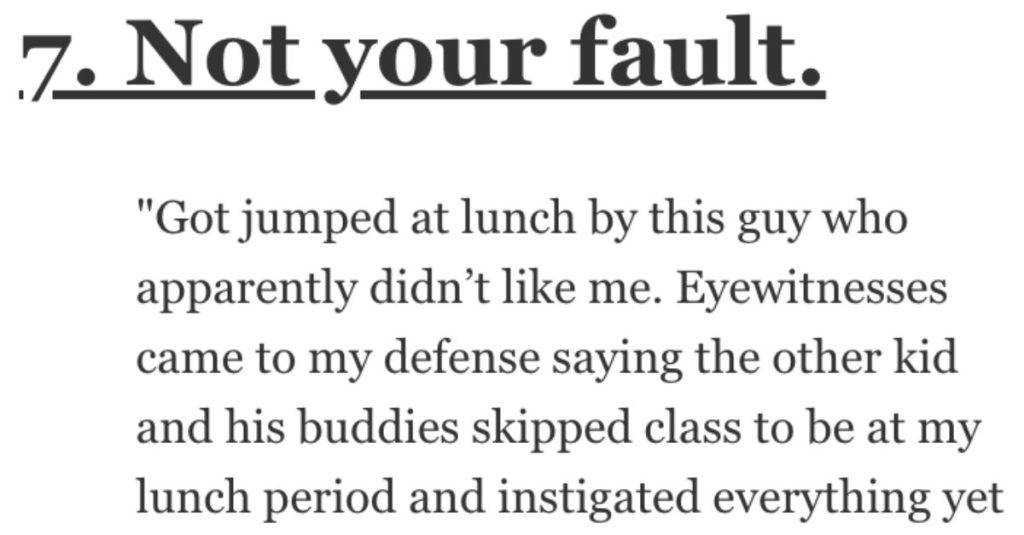 How many times have you heard that in your life?

I heard a lot…and it turns out it’s pretty true across the board, including when you’re going to school.

It’s just the way it is…

People on AskReddit talked about the most unfair suspension or expulsion they ever saw at school. Let’s see what they had to say.

“A student was having a panic attack and one of the teachers grabbed them by the shoulders, shook them aggressively then pushed them into a wall where the teacher continued to shake the student and hit them against the wall.

The student was suspended and then ended up dropping out and the teacher finished the year at our school before being relocated to a different school.”

“Our principal is infamous for cheating on his wife with another teacher.

So 2 students made a meme page on Instagram saying ” he (principal) can cheat on his wife, but I can’t cheat on my exam”.

Both students got suspended and couldn’t take their final exams.”

3. I had an appointment.

“I got suspended because I had a doctors appointment but this girl spread a rumor that I came to school in the morning then skipped school.

So when I came into school after my appointment, I was sent to ISS and suspended for 3 days.”

“My friend kicked someone on the way to school. We both got the same suspension.

I was guilty by association, having done nothing but be there while it happened.”

“Bully asked a girl out he was tormenting (we always defended her but he just kept at it).

She said no and he grabbed his Coke and went to pour it on her. This kid goes up to him, snags the coke and throws it to the ground, and tells the bully to f*ck off.

The kid who grabbed the coke was suspended for bullying and using inappropriate language.”

“Sometime in middle school I was just this nerdy quiet kid and of course there were a few bullies that gave me hell every day.

They were bigger than me, and also lived on my street or the next street over. So they gave me hell both at school and at home.

Anyhow, one day in the playground at school they were pinning me down, throwing rocks at me etc. I threw my math book at one of them out of frustration and it landed in the mud. They did not get in trouble, but I received 3 days of suspension for damaging school property and they made my mom pay for a new one.

They never stopped. One day one of them spit on me in the bathroom and I spit on him back. He then grabbed me by the throat and slammed my head into the wall. I went back to class with hand prints around my neck. At least that time we both got suspension.

No wonder I have self esteem issues.”

“Got jumped at lunch by this guy who apparently didn’t like me.

Eyewitnesses came to my defense saying the other kid and his buddies skipped class to be at my lunch period and instigated everything yet I was almost expelled and he got a week or two.”

“I saw a kid once get suspended for literally getting pushed on the floor.

This was due to a no tolerance to fighting policy. Many schools have it in place across America and it’s absolutely bullsh*t. A kid literally getting the sh*t kicked out of him will still get suspended despite not being the aggressor.

Essentially if you were going down and wanted someone to go down with you you could make that happen by just punching a random kid in the face.

You could be a gifted straight A student and it could all be ruined by some *sshole who punches you in the face.”

“Every girl who ever had a bra strap pop out or every time the (male) teachers decided their outfits were “tempting” you got carded.

3 cards and you got suspended.

If you are “tempted” by teenagers, you should not be around teenagers.”

“Normal girl wearing a slightly above the knee skirt: SUSPENSION!

Boyfriend sends to friends. Friends spread it to schools all over our county. Picture gets sent to me. I delete picture. I get suspended for a day because picture was sent to me.

Didn’t show it to anyone and deleted it when I got it. Didn’t ask for it, it because it was sent to me at all, I was still punished.”

“It was hat day. You pay one dollar and you can wear a hat in school.

These three Asian students wore those bamboo hats. They had them confiscated.

I had a classmate in 7th grade who was expelled (which, because we had only one each of junior high and high school, meant she was expelled from our entire district) because she was a Type 1 diabetic.

A teacher walked in on her with her insulin in the washroom, assumed it was drugs, wouldn’t let her take her insulin, and took her down to the principal’s office where she was immediately expelled.

Her parents were so horrified and disgusted they didn’t even fight it, just put her in private school.”

“Suspended for the colour of my socks!

“Kid in another class didn’t have his homework in because he was at his grandma’s funeral.

Teacher told him “Maths Homework is more important than a funeral”

Kid lost his f*cking mind, and was suspended…”

“The school expelled several students for a picture posted on Facebook. The principal said it promoted alcoholism.

The picture had a group of students in a party where you could see someone in the background holding a wine glass. It was a wedding.

The principal got the whole school and BoE to sue the students when the students tried to sue to have their expulsion nullified.

It ended when the school had to admit they were broke and had mismanaged the school funding. The students had their expulsions nulled but opted to go to other schools.

The school shut down a few years back and their buildings are now used for quarantine.”

“Some kid at my old school got suspended for defending themselves in a fight.

The main guy who started the fight was suspended for SHORTER TIME.”

“Someone in my class got suspended because they farted during quiet time.”

“My brother was almost strangled to death by someone on the bus on camera.

So he punched them in the face to get them off.

Three guesses for who got expelled for a week and who got in school detention.”

“I went to HS in the late 90s and we just got the Internet. This was the early Internet when any search could bring up p*rn.

Well, it happened to me, it was history class and we’re in the computer lab doing research, and what do you know p*rn came up on my screen. I was sent to the office, and they wouldn’t believe me it was accidental. I had never been in trouble before, but still I was suspended for the rest of the day.

Then it happened to other students/teachers, then they finally got filters on the computers. My suspension was never expunged nor was I ever apologized to, though.”

“When I got a suspended for a week for fighting even though I didn’t throw a single punch or retaliate.

The other dude came after me, pushed/pulled and hit me a couple times and I kept saying “I’m not fighting you” because I was in the principals sh*t list and didn’t want to get into any trouble.

It was broken up and we had to report to the principal and I still got suspended for it.”

This was in middle school.

The school used my friends and I to set an example.”

“When I was in fifth grade a boy slammed my head into the bus window.

The school counselor asked me if I had considered that maybe he liked me and then they suspended both of us for three days, for some reason…

My mom tried to confront the school and they basically ignored her. She’s disabled and didn’t know what else to do at the time so nothing happened.”

“She didn’t do any of her home work for several days bc her grandmother had passed away, and since her and her mother were the only relatives nearby they had to plan the funeral, make arrangements, etc.

Her mom wasn’t great so she honestly ended up doing a lot of it and just using her moms credit card (which her mom gave her permission to do). The following Monday she explained to the science teacher that she hadn’t finished a project she was supposed to bc she had been busy making the arrangements.

He said that was “a cheap excuse” and called in a counselor bc she was “allowing family matters to get in the way of school work” so he wanted the counselor to make her get over her grief so she could do the sh*tty project. She also got in trouble with other teachers who reacted similarly. I just remember being really p*ssed about it- she was such a sweet girl and you could tell just by looking at her that she was exhausted.

I understand that sometimes you have to put personal stuff aside, but she was like, 15 at the time. She was just a child, man.”

What’s the most unfair suspension or expulsion you’ve ever seen?