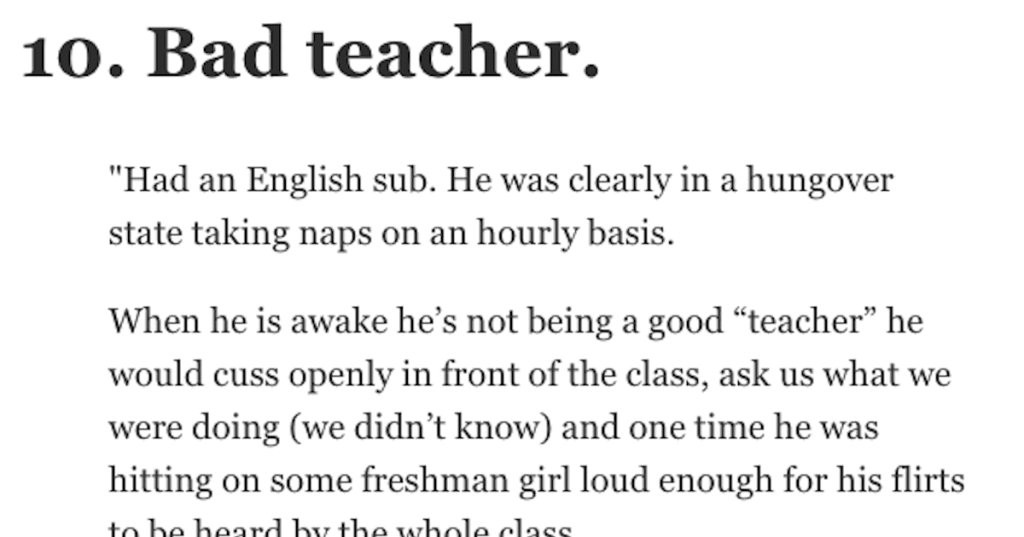 During your school days, was there ever an incident where a teacher lost their cool and said some pretty scandalous things in front of a class?

Or maybe they just said something totally inappropriate in front of students for another reason?

It really does happen all the time! And we’re about to hear a whole bunch of stories about this kind of stuff!

Let’s see what folks on AskReddit had to say about bad things they heard teachers say in front of classes.

“The father of a class-mate died in a motorcycle accident, he went into a corner too fast and crashed into a tree.

A couple of days after the accident (which was the first day my class-mate went to school again), our physics teacher decided that it is a good moment to teach the “speed doesn’t kill you, acceleration does”-lesson. With the example of a motorcycle driving into a tree.”

“He told our whole English class quite seriously that for his 30th birthday he wanted two 15 year old girls to sit on his lap, and he even named which ones.

I don’t know what he was telling us for, maybe he thought we would pressure them into doing it or something.”

“New year, new teacher and his introduction was: “If you are loud I will hit you with the chalk”.

We all thought it was very funny but the next day we learned what doom was because he never missed.”

“I had a professor that had given us an in class assignment.

He was a sh*tty teacher and we were first year students so we didn’t finish it and he told us to take it home and finish it and when we were done to “bring to me. Bring it to daddy.”

He was Greek and didn’t know the context, but he was the head of the department so we all held back our giggles and left.”

“She read out my name and looks at me and says , “Your parents named you this?””

“I once had a substitute teacher for my health class and he went on this long rant about how r*pe can be justified.

So many people complained about him.”

“I had an art teacher that got caught drinking. Apparently someone from the previous period told on her.

The vice principal came into our class and told her to come with him. We all heard her yell “they drove me to drink” from the hallway.”

No .. really.. he was a substitute teacher who wrote his name on the board and said, ” I will give you 3 minutes to laugh, but then we gotta get to work.”

Kid punches the kid in front of him in the back of the head.

Teacher sees this and says, “now he’s gonna punch you in the head and your all gonna sit there and watch because there’s nothing you can do about it”.”

“Had an English sub. He was clearly in a hungover state taking naps on an hourly basis.

When he is awake he’s not being a good “teacher” he would cuss openly in front of the class, ask us what we were doing (we didn’t know) and one time he was hitting on some freshman girl loud enough for his flirts to be heard by the whole class.

He was later removed for “unknown” reasons.”

It was an all guys high school and the teacher was the headmaster/a catholic brother/teacher. He was saying this as a follow up to a kid acting up and being a wise ass.

He says “oh, you think acting up means you have balls?” Kid says “yeah” amd then he responds to the kid with that gem…

Everyone was weirded out and thought a line got crossed.”

“During English class we were watching Tomorrow When the war began. Those of you who have seen the movie know they start the movie talking about s*x.

Those were the days…”

“Freshman year in high school a classmate called someone a “chode” in gym class.

The gym teacher asked him what that means and the student explained “A chode is a good student”.”

“Teacher was using an example to illustrate a concept. He was a very nice, bubbly man, we all liked him.

He points at a random student and says: “For example, Bob, imagine you’re adopted-”

About half the class cringed as they knew what Bob was about to say: “Um, I am adopted”

You could see the gears turning in the poor teachers mind omgohfuck I can’t say sorry because that implies that being adopted is bad, omgohfuck

The silence was palpable as he tried to think of something to say, he eventually just turned to another kid “….are you adopted?” “no” “Ok so, imagine Steven is adopted-” lollll poor guy.”

“College history professor called me a mongrel after finding out I’m mixed race.

The class laughed awkwardly with me.”

“Class mate explained he couldn’t get through the 20-page assignment in time due to his dyslexia, Old-timey teacher says ” there’s no such thing, you’re just lazy”.

“Looked at a mentally handicapped girl and muttered “retard” just loud enough for a few people at the front to hear.”

“I had a teacher when I was 13/14 years old that said to a girl of the class she was going to end up prostituting. In front of the whole class.

Same teacher said to an other girl that she was going to end up working at McDonald’s if she kept having bad grades.

Same teacher told the whole class our parents were “ungrateful to the pedagogic team that takes care of their children” because she didn’t receive any chocolates for Christmas.”

“A teacher once got fired because at the end of a workshop class she asked all the black students in the class to stand up, told them that they would be staying behind to clean the workshop after class and then dismissed all the white students.”

“At the start of class our teacher just sat in silence for five minutes, we waited for him to begin. He then said “you have just wasted five minutes of your life. You will never get that time back”

A bit harsh on a class of nine year olds.”

“Assembly in front of the whole school (ages 3 and up).

“”I don’t know why there are so many girls in this class. You’re supposed to be married and have children already.”

I lived in a neighborhood a few blocks away from a park and I was finally old enough to get to walk there myself. I was overweight and I had started walking there almost every day.

I would walk the track for hours and then walk back home. It was a positive for me and would have probably led to healthier choices down the line. One day during free period he called out my name. In front of my entire homeroom, kids I’d known my whole life plus a few new people, he told me that he had seen me walking down the road.

Laughing now, he said that he to wait ten minutes for me to move out of the way because I was blocking half the road. Most of the class laughed with him. I had to sit there, holding everything in until the bell rang. Then I went to the bathroom and sobbed. I never walked to the park again. I was afraid to leave my house for a really long time.

That sh*t was so uncool and f*cked me up for a long time. People really suck for absolutely no reason and it’s just a thing we have to accept and I hate it.”

“I had a religion teacher in high school named Mr. Nguyen, who was working on becoming a Jesuit priest, and was a really cool guy. He always had a smile on his face and did his best to make class a fun experience for everyone.

There was a kid in my class who was a really annoying smart *ss, but Mr. Nguyen was always really patient with him, until one day he pushed him too far. I forgot exactly what the kid said, but it definitely crossed the line.

Mr. Nguyen slammed his fists on his desk and shouted, “Why can’t you EVER shut the fu*k up!” He then picked up his stapler and chucked it at the kid, missing his head by a few inches and leaving a huge dent in the wall and then stormed out into the hallway.

I had never seen a teacher blow up like that and I definitely never expected it from him.”

“Alcoholic English teacher in 9th grade: if you buy me a Johnnie Walker black, you are guaranteed to pass the class.”

“Had a fairly new teacher. She’d been with is a few months and it was her first year teaching.

There was a dude who was acting up in class. Teacher wound up yelling at him “(Name)! Would you just shut the f*ck up!?”

Felt so bad for that teacher. She legit started crying and apologizing. She was convinced she was going to get fired. The dude she yelled at was well known as being a clown.

He actually went to the admins and told them he 100% deserved it and it wasn’t her fault at all. Everything turned out fine.”

“In front of a class of 13 year olds a female teacher asked a student to go ask a Male teacher if he had any floppy d*cks.

“We had an old German substitute teacher at my high school. Like so old it looked like he could collapse at any given time. He told us about how he used to be a Nazi back in WWII. I guess this is also the time to mention that my school was predominantly white.

We had maybe 20 black students total. The sub had asked one of these students to bring him a stapler or something like that, which the student the brought him. His response, which got him fired immediately, was something like “Wow I didn’t expect one of your kind to be helpful. A lot of you people are like monkeys.”

Pretty sure the only reason that student didn’t punch him in the face is because the teacher would’ve crumbled.”

In the comments, tell us about the worst things you’ve ever heard a teacher say in front of a classroom.