5 Facts About the Beatles Final Rooftop Concert in 1969

It’s been 50 years since The Beatles played an unannounced, daytime concert on the rooftop of Apple Corps in London, England. The group played for 42 minutes and tried out some new material as people gathered on nearby roofs to watch the legendary band play their first live show in over two years.

It turned out to be the final live show the band ever played.

To celebrate the 50th anniversary of this landmark pop culture event, here are 5 facts about the final Beatles live performance. 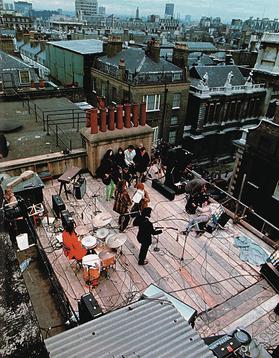 1. They picked the location out of convenience

A bunch of different locations were floated for the performance, including a boat and a Greek amphitheater, but the band ultimately picked the rooftop of their record label because it made the most sense. Paul McCartney said, “So it was suggested that we go up on the roof and do a concert there. Then we could all go home. I’m not sure who suggested it. I could say it seems like one of my half-baked ideas but I’m not sure.”

2. There was a reason no George Harrison songs were played

The band was not in a good place in January 1969 – internal strife was threatening to tear The Beatles apart. All the songs played on the rooftop that day were penned by Lennon and McCartney. No songs written by Harrison were played because the band didn’t know if Harrison would still be a Beatle by the time the project was done. Harrison had walked out of rehearsals more than once and even suggested that the band put an ad in the music magainze NME to find a replacement for him.

3. The group was not getting along at the time

In January 1969, McCartney pretty much controlled The Beatles, and George Harrison was not happy about it. John Lennon was known to be silent for long periods of time and to let Yoko Ono speak for him. George Harrison called this time “the winter of discontent.”

4. The police pulled the plug on the show

A bank manager eventually called the police to complain about the noise from the rooftop concert, and officers went to the roof of Apple Corps. The band kept playing despite warnings from the police to stop and eventually an officer pulled the plug, ending the show.

The performance obviously stunned onlookers and stopped traffic. But not everyone was thrilled with the show. Quotes from people who watched the show included,  “It’s The Beatles? Christ, it doesn’t sound like that.” “You call that a public performance? I can’t see them” “This kind of music is alright in its place, but I think it’s a bit of an imposition to disrupt the business in this area.”

Check out some footage of the show in the clip below.

What a way to go out…