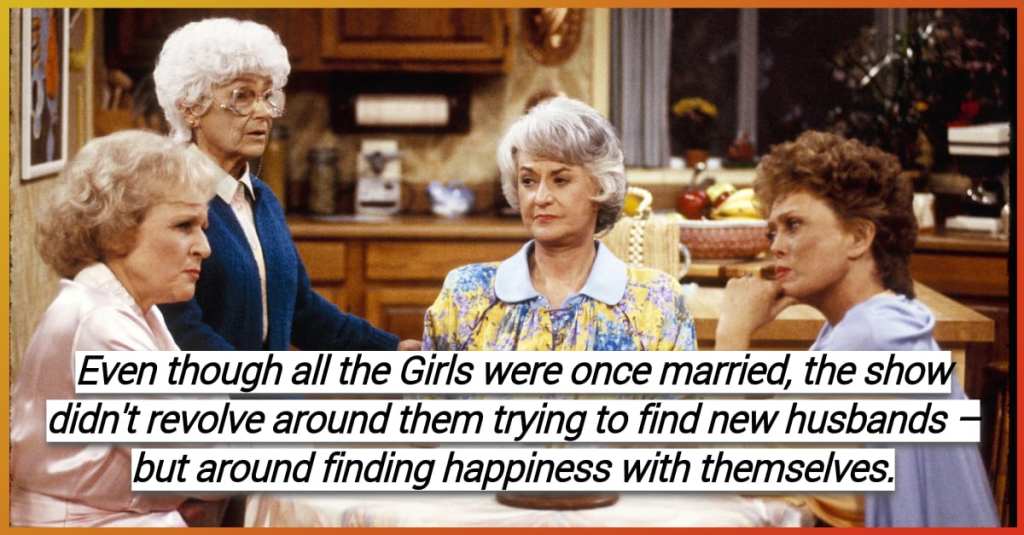 5 Ways “The Golden Girls” Was Ahead of Its Time

If you aren’t a fan of The Golden Girls, then I’m sorry, but we can’t be friends. The show is hilarious, poignant, heartfelt, and brilliant – everything and more you could ask from any sitcom (plus, FEMINISM!).

Which is why I maintain that it’s one of the best ever, and I would like to submit these 5 facts to bolster my case.

5. They didn’t need to be married to be complete and happy.

All four ladies were either widowed or divorced, and though they dated regularly, their lives didn’t revolve around the idea that the only way to be happy was to find their way back into a marriage. Instead, the show focused on the ways they took care of themselves and each other, and the lack of focus on romantic relationships was extremely refreshing.

4. The intentional inclusion of homosexuality.

The episode titled “Isn’t It Romantic?” won an Emmy for the way the ladies took in stride the appearance Dorothy’s friend Jean, who was a lesbian.

I mean, they were just totally unruffled by the fact. How novel.

3. The Girls loved themselves without apology.

It remains something of an act of rebellion for women to love themselves and their bodies no matter what society has to say on the matter, but these four ate, talked, laughed, and never bothered wondering what others might think about any of it.

2. The way they addressed a HIV/AIDS scare.

Rose found out that she might have contracted the virus after a blood transfusion and, during the nail-biting, 72-hour wait, panics and thinks God is judging her – to which Blanche has the perfect response.

“AIDS is not a bad person’s disease, Rose. It is not God punishing people for their sins.”

The AIDS crisis was raging, and with it a rising tide of homophobia, so those words would have meant a lot to many people.

1. All of the times they discussed their sex lives without shame or judgment.

The show went against the grain by having older women not only enjoying sex, but talking about it like a totally normal topic between women (which of course it always has been).

I think it’s time to pull up some reruns!

Do you love The Golden Girls? Have you seen it? If you don’t agree with me on this, I’d love to hear your arguments in the comments (but we still can’t be friends).