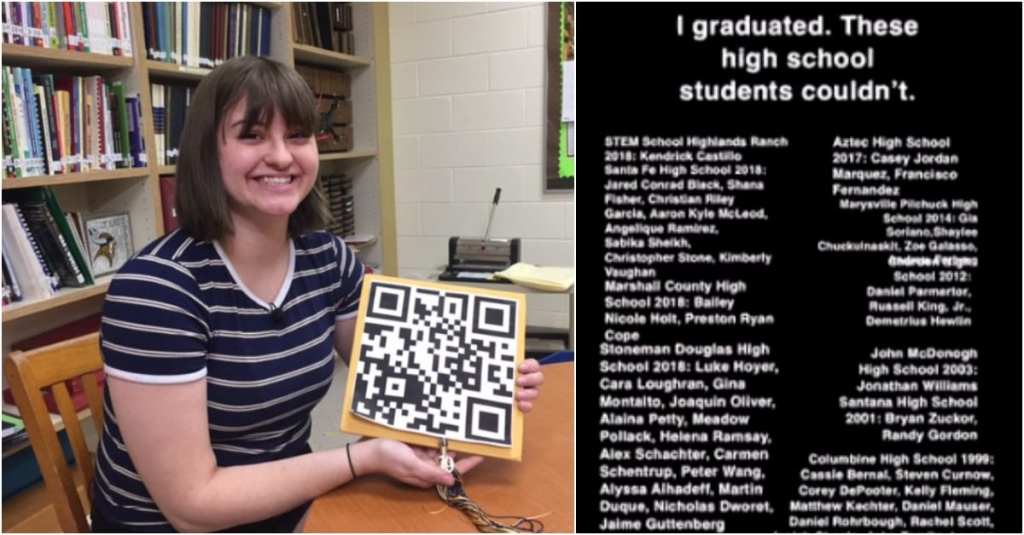 If there’s one issue that has galvanized young people in the U.S., it’s the fight for gun control, largely due to the epidemic of deadly school shootings throughout the country.

It seems as if almost once a week there is a mass shooting at a school in America, and young people are fed up and demanding action from the folks in D.C. High schoolers have staged walkouts and demonstrations to protest the wave of violence that, unfortunately, seems to show no signs of letting up.

Gina Warren, a high school senior from Ohio, plans to make a statement when she graduates this spring. Warren designed a QR code that directs viewers to a list of people killed in mass shootings at schools since the infamous massacre at Columbine High School in Colorado in 1999.

i decorated my graduation cap pic.twitter.com/FBzQ8BTIxo

The idea is that anyone who takes a photo of Warren’s graduation outfit will be directed to this sobering list of innocent victims. Warren said she was inspired to make the cap after seeing students from Parkland High School in Florida silently protest the National Rifle Association last year. Warren said, “I wanted to make something just as powerful as a statement, but rather than direct it to lawmakers or the NRA, I wanted to direct it to everyone who will see it.”

Warren said that putting the list together was very emotional: “That was so heartbreaking. The names I included on my cap were just the ones killed because of a shooting that happened at a [high] school. It doesn’t include kids who won’t be able to graduate because of a shooting at a movie theater or church.”

Gina Warren plans to wear a QR code on her cap that will send anyone who snaps a picture of her gown to a list of school shooting victims. "I wanted to make something just as powerful as a statement, but rather than direct it to lawmakers or the NRA, I wanted to direct it to everyone who will see it," Warren said 🗣🎓 (📷: Gina Warren)

Warren’s tweet went massively viral and as of this writing has been retweeted over 92,000 times and viewed over 4 million times.

Here’s the QR code if you’d like to scan it yourself to see the tragic list of people who have lost their lives.

it’s my own qr code site. here’s the code! pic.twitter.com/nzZUgQ4tze

That’s getting the word out in a big way. Great work, Gina!