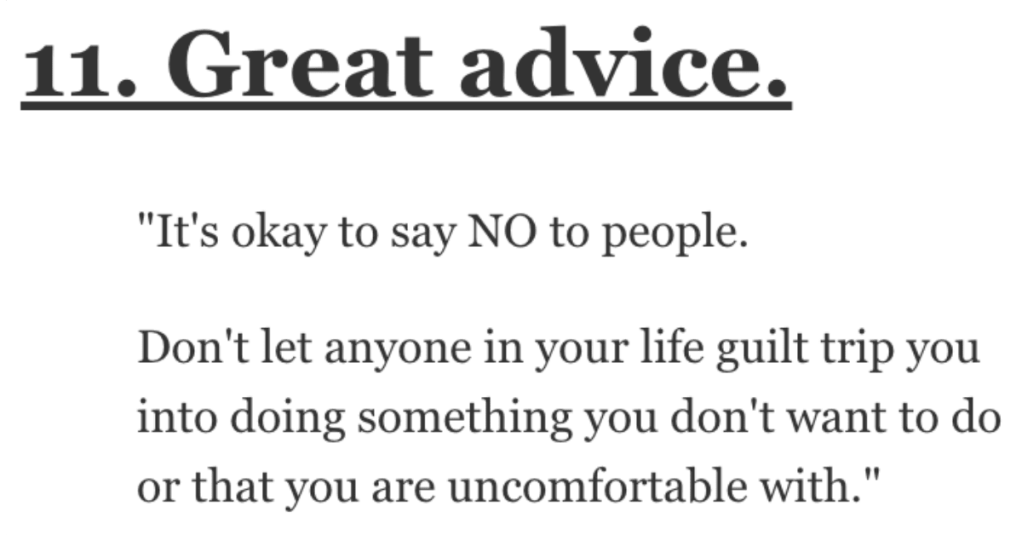 Adults Talk About Things That They Think Every Teenager Should Know

Remember when you were a teenager? Remember how you thought you knew pretty much EVERYTHING there was to know about EVERYTHING?

Yeah, it turns out that we really don’t know all that much about how the world operates when we’re in high school and we live under our parents’ roof and are pretty well taken care of. Who knew, right?

But that’s life. You live and you learn.

Let’s take a look at some life advice for teenagers from folks on AskReddit.

“Learn a second language. It’s good for your brain, and it’s a lot easier when you’re young.

Get active and fit; make it a habit. This is one of the most important ways to stave off cognitive decline as you get older.

Plus, it’s great for managing mental health during the transition to adulthood.”

“Start trying to save money now. You will definitely thank yourself later on.

Even if you don’t know yet what your saving for… Could be a down payment on a car, could be for a computer, for a move to a new town for a better job, deposits on an apartment and utilities, car repairs, veterinary visits for a pet, a new bed/mattress.

Life happens and if you have a savings, it makes it easier.”

You need something that’s going to pay you, it doesn’t have to be your life’s passion, contrary to what my peers were saying at that age, but you do need to be able to tolerate it.”

“When you get to driving you need to realize that the laws of physics apply to you. They aren’t out to get you, they’re just indifferent.

Slow the f*ck down and don’t horse around, you’re driving a very heavy machine at speeds we did not evolve to deal with.

Developing unhealthy coping mechanisms for emotional issues will fu*k you up big time down the road. If you have issues, deal with it head on, right away.

It can take time, but start the work now.”

“If you’re experiencing harassment, bullying, or anything that isn’t technically a matter for the police, don’t stop reporting it to the school until somebody actually listens to you.

The first person you talk to at the school may blow you off. Go to the next person up or another department. If they say there’s nothing they can do, get them to put it in writing.

People are often much more inclined to help if their actions (or lack thereof) are being recorded.”

“Learn to trust your gut when in strange situations. If something feels off / wrong, it probably is.

Don’t go along with something if it feels wrong.”

“How to deescalate difficult situations.

And how to disagree with a teacher/someone in authority without sounding like a know-it-all or in a condescending manner. For example, if a teacher says X and you are certain you learned differently, recognize that there may be certain circumstances that you may not realize that changes something.

Lead the disagreement with a saying like: excuse me, I may be wrong, but I thought/learned Y. This kind of phrasing does not cause the other person to be on the defensive, which can allow gentle new instruction for you, or a graceful/face saving correction for the teacher.

A situation with differing opinions doesn’t have to be confrontational.”

“I graduated 10 years ago from high school and none of those people are in my life now.

So take your time being you and grow your self esteem and talents now over wasting time trying to impress those pr*cks you won’t even remember in a few months after graduation.”

“It’s okay to say NO to people.

Don’t let anyone in your life guilt trip you into doing something you don’t want to do or that you are uncomfortable with.”

“While you shoudn’t believe those who say these gonna be the best years of your life, try to make the most of it, to enjoy the ride.

Don’t be ashamed of your hobbies and passions ; those who make fun of that can go f*ck themselves.

Every feeling you have deserves to be expressed in any constructive manner.

Don’t fear rejection from those you like/love. Tell them and come what may.”

“The measure of whether someone has the potential to be a new friend of yours is NOT whether they like a bunch of things you like.

It is entirely possible to become friends with people who like a ton of things you’ve never heard of, or even already decided you dislike. You are at a spot in life where a lot of your likes and dislikes are subject to change anyway.

Biggest thing: making a new friend often takes time. Lots of time. Much longer than movies and shows make it look like. Find things to do, groups to join, city league sports to play (pandemic permitting, or after) and keep learning about the people you see repeatedly.

Far too many early twenties people who report having no friends made a premature judgment that one or more prospective friends were off the list, when it just needed a lot more time.”