My oldest is 3, and I’ve been wondering lately how many years I have left of tying shoes (or buying ones that close with hooks and loops). Apparently, it’s still a while down the road for me, but if your kid is ready but still struggling to master tying his or her own shoes, here’s a pretty genius hack for making it happen sooner rather than later.

“My name is Colton and there’s a new way to tie shoes,” the 5-year-old says in a video before showing the world how he learned to tie his sneakers from a friend at school. 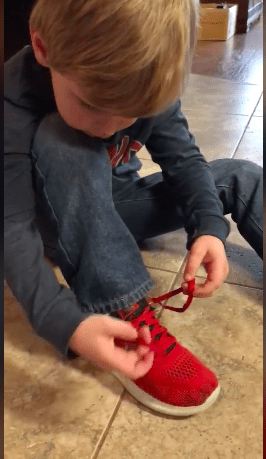 Kids struggle to tie their shoes mostly because their fingers aren’t big enough to hold the loops shut while they tie the shoes – they can either tie the knot or maintain the loop, but not both at the same time.

But the way Colton does it eliminates the problem completely. 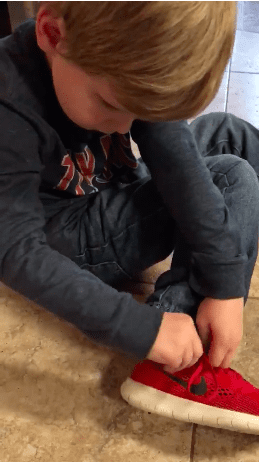 Instead of trying to hold the loops shut with his fingers, Colton sticks the end of the shoelace into the top lace hole, holding them in places while he ties the (double) knot.

Then, he pulls the ends free and goes about his day!

"Coolest shoe tying trick ever!!! Posting to help anyone who is struggling like we were! Feel free to share." ❤️Support our mission by pre-ordering our book in time for Mother's Day: http://bit.ly/2pHwXGl ❤️#LoveWhatMattersA Love What Matters Original Video Submitted by Ashley Lillard

The video was originally posted on Love What Matters’ FB page and has been viewed over 7 million times.

I’m in no hurry for my littles to become bigs, but since it’s going to happen eventually, I’m going to keep this little trick in my back pocket.

How did you teach your kids how to tie their shoes? Share it with us in the comments!