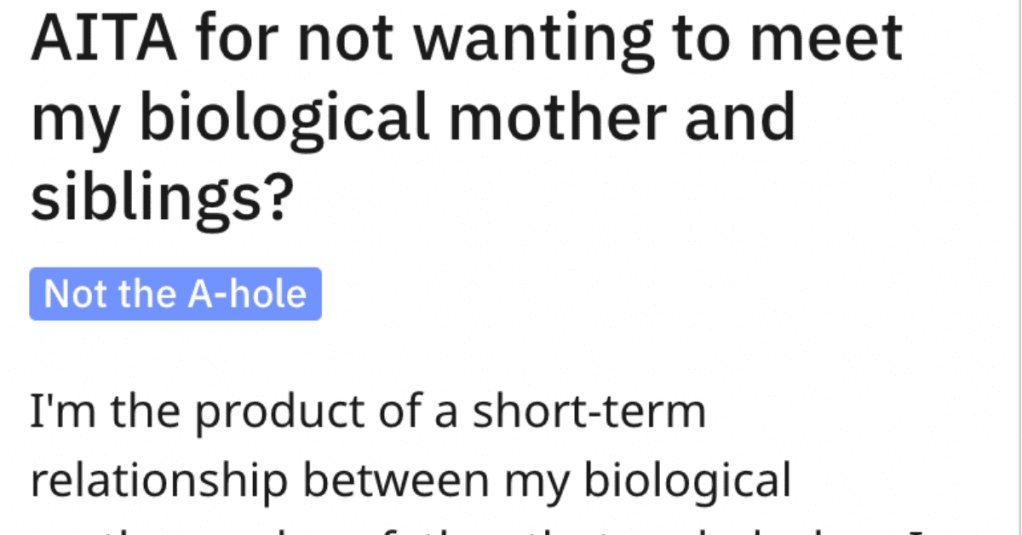 Are There Good Reasons To Refuse To Allow Family Into Your Life?

I’ve never been adopted or abandoned by a parent, but I’m married to someone who was, and I can testify to the fact that their feelings around the entire matter – no matter how young they were when it happened or how healthily they dealt with those feelings – are complicated.

This woman was abandoned by her birth mother when she was four months old. Her mother said she couldn’t handle the stress or whatever, but within two years had married again and had the first of what would become four children.

She got married when I was 10 months old and had the first of four children with her husband two weeks after my 2nd birthday.

She was raised by her father, and after he passed, her uncle. She has seen her mother in passing but her mother has never reached out and OP considers herself orphaned at this point.

My dad raised me by himself until I was 13 when he died. My uncle adopted me and raised me.

My biological mother came to the funeral but she didn’t reach out to me at any point. I’ve always considered myself an only child and an orphan.

Recently, though, her half-siblings have reached out and asked for a meeting. They’ve known about her for awhile, and she’s known her “stepfather” for quite a while.

Recently her 4 kids reached out to me. I’m not sure when/what they’ve been told, if they know the whole story, but they seem to have known about me for a while before reaching out.

Oddly enough, I actually know they father (I guess my stepfather) because he was my art teacher in high school and he privately told me who he was. We kept in touch and have a distant, friendly relationship, but I don’t consider him a stepparent.

She’s not sure what they want but has declined a meeting, letting them know that she’s been through a lot to resolve her feelings about their mother and she’s not interested in wading back into the quagmire again.

So, as I say, their children have reached out to me a few times and I’ve declined their requests each time. I’m sure they’re lovely people but they aren’t part of my world and I really don’t have an interest in knowing them.

I went through a lot of mental hurdles growing up knowing I wasn’t good enough for my mother but they were and it’s been with a great deal of help and hard work that I’ve worked through my issues and have become much healthier and happier from it.

OP has made a life for herself and is healthy and happy – she does not want a relationship with her mother and doesn’t see this ever changing.

I’m married with a family of my own and as bad as it sounds I’ve got enough going on without adding more to it in the form of meeting these people.

Part of my issue with meeting them is that they’ve intimated that their mother wants to know me now and I really don’t want to do that. I have absolutely zero interest in knowing her.

I have no malice for her, I wish her well, but she has no idea what her rejection of me did to my psyche and how much work I had to do to get through it.

But, that’s not her problem and I have no right to put that on her. She made her choice and we all have to live with that.

Despite OP’s very solid reasoning and levelheaded approach, her siblings are persistent.

When they moved off social media and sent a letter to her house, she contact an attorney to get them to stop.

The problem is that the four siblings are very upset that I don’t wish to know them. They’ve sent multiple messages saying that all they want is one meeting and if I don’t want to know them after that then they’ll stop but they think that we all need to meet and talk.

Up until recently these were all messages on social media but they recently sent a letter to my home address which means they know where I live and that really creeps me out.

They think she’s awful and dramatic, but she’s thinking she’s just protecting what she’s worked so hard to build.

So I threatened legal action and now I guess I’m an a$$hole because I’m some heartless person who doesn’t care about family.

I’ve come here for outside judgement. What do you guys think?

Who does Reddit agree with? Read on to find out!

The bottom line is that OP doesn’t owe her biological family anything, and if they’re mad, she’s got to let them be mad. 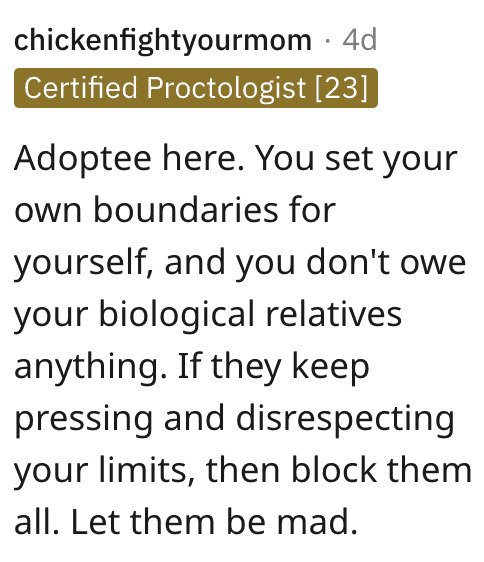 It’s possible her half-siblings have not considered the situation from her perspective.

Several people warn OP that it seems like her bio family could want something from her, which is why they’re contacting her now. 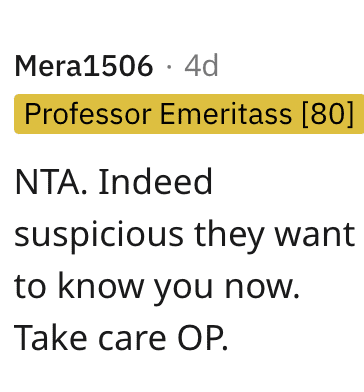 They shouldn’t need more than a simple explanation that she’s doing what’s best for her own mental health. 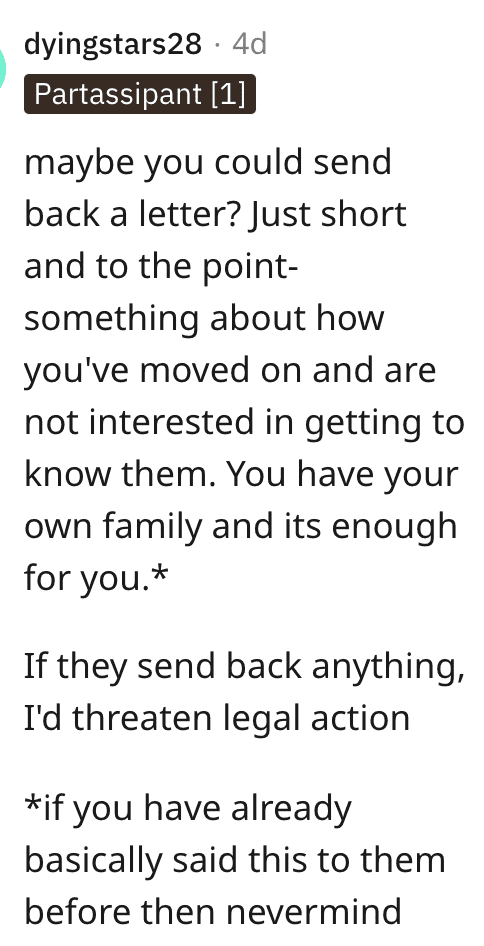 If they don’t respect those boundaries, they don’t care about her anyway. 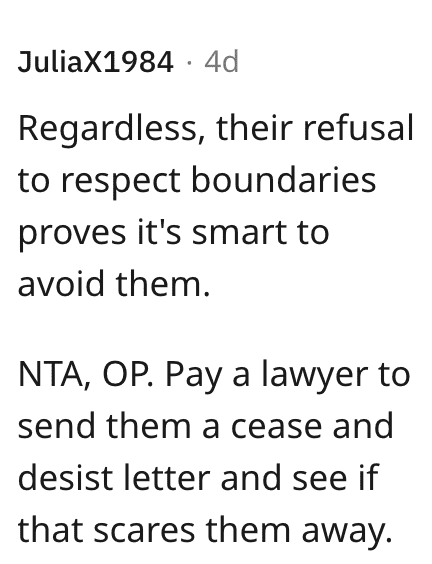 I understand the need to find “family,” but there are already four of them plus their mother, so it’s the pushing after she’s repeatedly said no that’s raising red flags, I think.