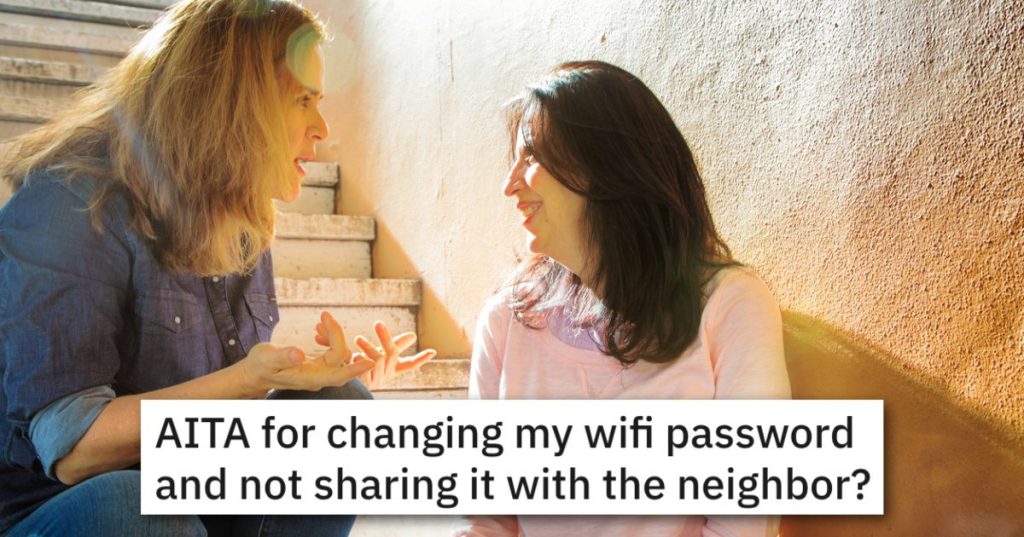 Are We Obligated To Share WiFi With Neighbors In Need?

I think most of us are used to the idea of sharing when it comes to the internet. We share passwords for streaming apps and the like, because no one can afford it all and no one is policing it.

WiFi can be a whole other beast, though, because as this OP found out, the more people don’t always equal merrier.

OP works most of the day outside (and out of their apartment), and since they are single, they get to do what they want when they come home.

What they want is to spend time online gaming, etc, and so they pay for the “good” internet.

I work almost all day outside and in my spare time I play games on ps4 during the week. I pay for a good internet, because I like not having any lag while playing or any internet slowness.

My ps4 is in my room and the internet router is in the living room, so it’s wi-fi and not cable. And because of that, I constantly check the internet speed and it’s always X.

Recently, some of their neighbors came over for dinner and she shared her WiFi with them.

Soon afterward, her internet speeds slowed significantly and the technician suggested someone in the building might be using her connection.

A few months ago, I invited Jenny’s family over for dinner and gave them my wifi password, apparently theirs was weak at my house and I went through politeness.

Last month, I started to notice very bad internet speed (1/10th of before) and a few technical visits to resolve until the technician asked if I had passed the password to someone in the building and I put the pieces together.

When she asked her neighbor about it she confessed they couldn’t afford internet and asked whether or not OP would share.

I then changed the password, because the internet was crap and I didn’t want to share it with 3 more people.

Last week, the neighbor knocked on the door and asked for my wi-fi password, because her internet wasn’t working and I commented saying that I changed it because there were people from other apartments using it.

She got the message and said she was having a hard time and couldn’t pay for her own internet, so in desperation she used mine and if I couldn’t give her the new password, promising that they would only use it at night (when they got home from work)

OP said no, that didn’t work, because evenings was when they used the WiFi and the whole reason she paid more was to ensure a good speed/connection.

I denied saying that night was my leisure time too and that I didn’t want to have bad internet and I don’t want to pay more for the internet to be good for 4 people. And even more so for her using it for a month without my permission.

She stomped off and, oh gosh, my new image in the building is of the petty bitch who doesn’t want to share Wifi with people who are struggling financially.

Now everyone in her building thinks she’s a jerk, so she’s asking Reddit whether or not that’s true…

It’s definitely not helping their case that they were trying to steal it without asking. 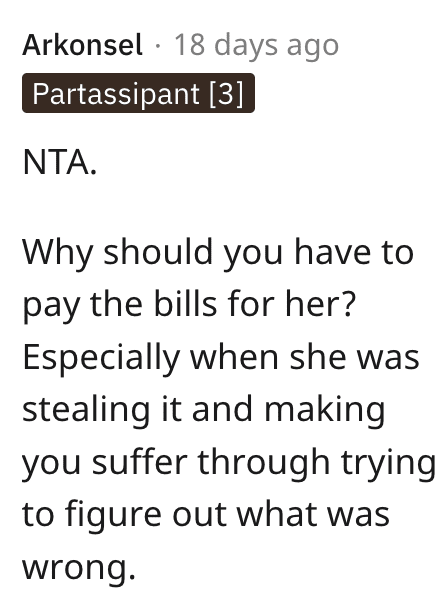 We can be sorry for someone else’s situation without being able to finance them short or long term. 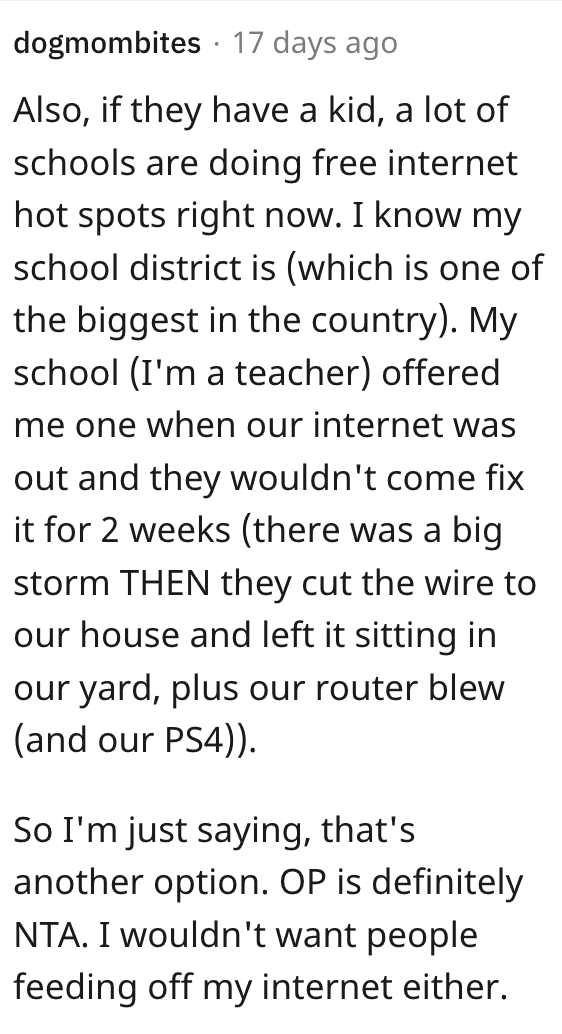 And OP isn’t exaggerating about the impact other people have on one’s internet speed. 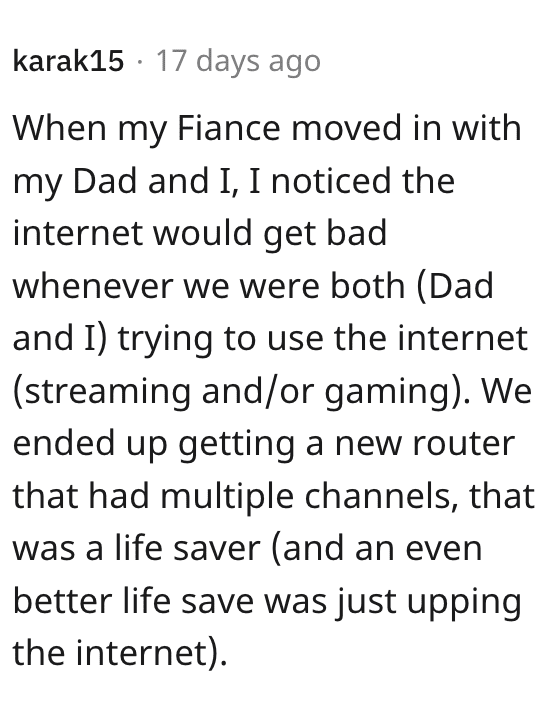 People also think OP’s neighbor is more nefarious than they want to admit. 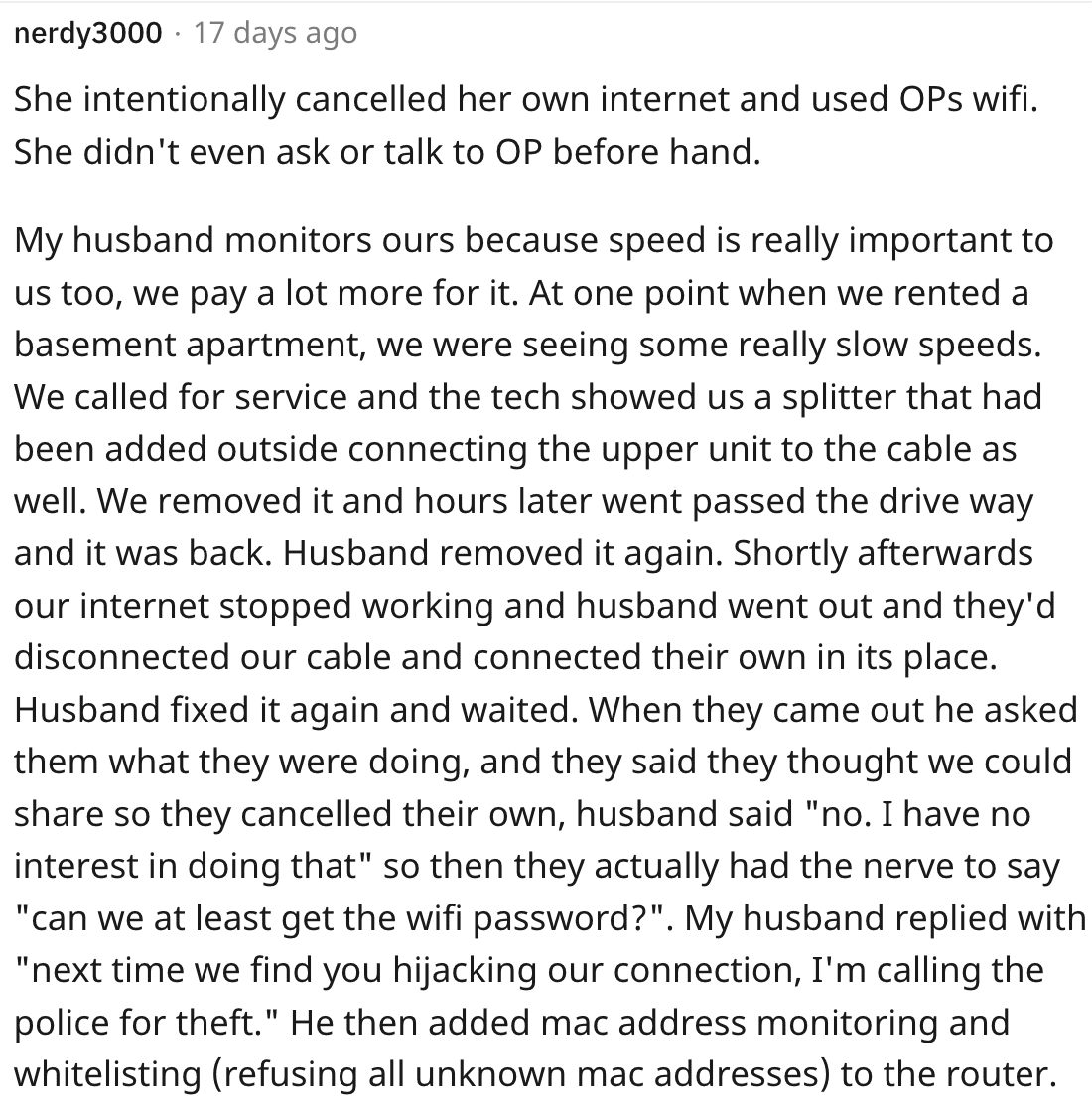 I mean, the other neighbors are perfectly welcome to pick up the slack. 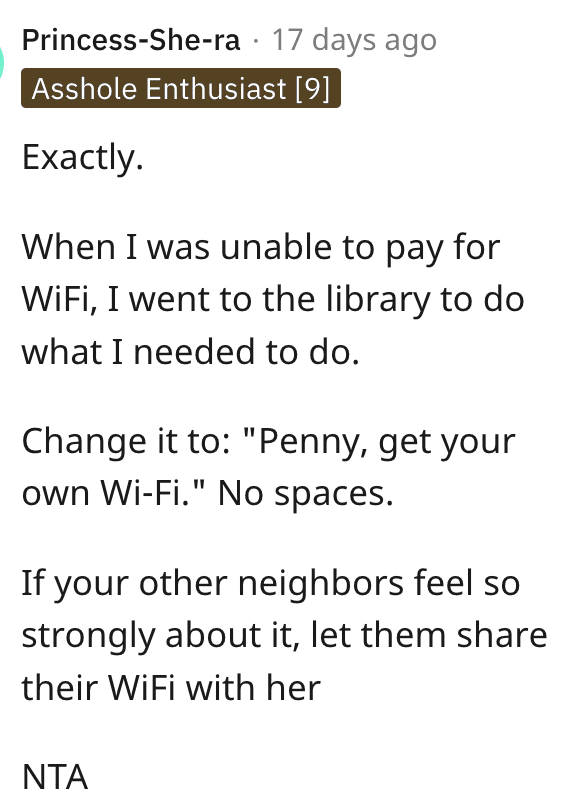 Y’all, don’t do this. There are always options other than stealing during those rough times.

Would you have felt guilted into helping, or do you think OP did the right thing? Let us know in the comments!