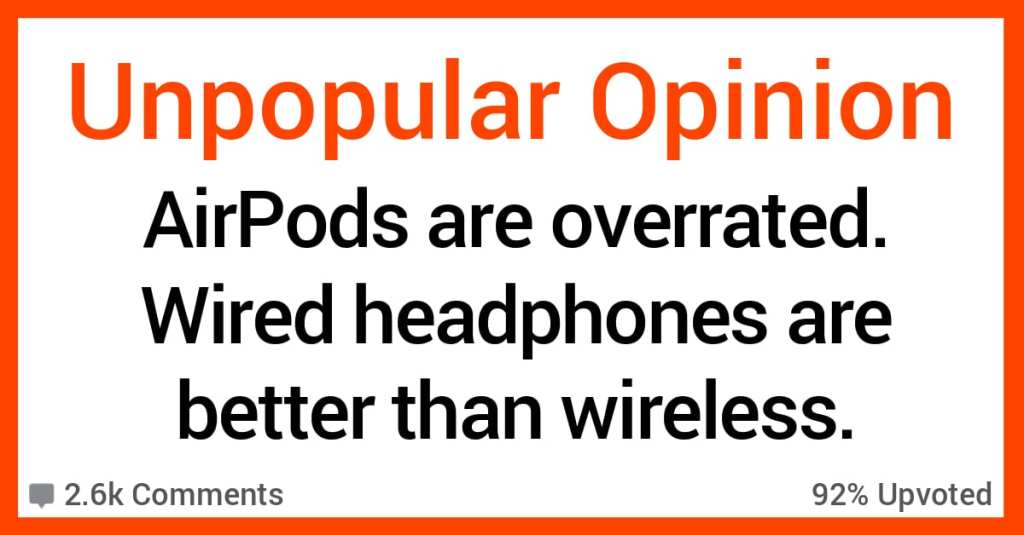 Are Wireless or Wired Headphones Better? People Shared Their Thoughts.

I gotta say, I haven’t taken the big leap to wireless headphones yet, so I feel like I should remain a neutral observer in this debate…

But other folks sure have thoughts about it!

You have to charge them. You have to keep track of many components (both pods, case, charger). You can easily lose them or drop them into an endless abyss that is the subway grate in the sidewalk.

Not wired headphones! You never have to worry about if they’re charged; they’ll never die mid-run! When you drop them, they’re not likely to fall somewhere to their death, and they’re harder to lose!!

Maybe this is the poor grad student coming out on me- but wired headphones have my vote any day!!”

“Main advantage of wired is that people see them and don’t try to talk to you.

“As per me, AirPods are earphones and not to be considered headphones.

Now when it comes to technical headphones which go over your head and cover your ears fully, wired will always give you better quality. But for easy of use and flexibility wireless are the boss.

I have a sony xm3, never felt the need to go for the wire. Yes, I’m not a true audiophile though.

Coming back to AirPods, they suck and ae just for making a statement. Any pair of quality headphones would beat the shi*t out of AirPods or any other wireless earphones.”

No snagging on random knobs, corners, even my own hand sometimes.”

Aa good set of wireless over-ears like a pair of Marshall’s can last a long time on a charge.

Bigger batteries, no case to keep track of.

Can be great for use with these headphone jack-less phones.”

“Never liked any type of earbuds as I find them extremely uncomfortable to wear.

For my gaming I prefer wireless as it lets me stay on voice chat if I have to run to the fridge or let the dogs out.

Like someone else said here though, they have bigger batteries so unless you forgot to charge them you shouldn’t have a problem with them dying unless you are on a 24 hour plus marathon.”

Day one of AirPods they fell out of my ears into a paint bucket. Corded ones have been going strong for years.

8. For the music lovers.

You don’t see music producers rocking AirPods in the studio.”

9. Wireless all the way.

“I use my wireless earbuds with everything I do: Brushing my teeth, cleaning my room, working out etc.

Which is all a lot easier to do with wireless. I’ve been running with wired ones before and they just fall out.

Also, Audio is always much clearer. And battery life should last a while + charging is super quick.

I agree that AirPods are overrated though. My earbuds are made so that they don’t fall out your ears when exercising. I think you just need to buy the right ones.”

“You gotta also consider that Bungee effect, when your cellphone falls and wired headphones save the phone from total destruction.”

“After buying wireless headphones both gaming and AirPods for phone usage I will never ever go back.

Wires are so annoying and you can charge both at night or whenever you’re not using them.

There isn’t a single disadvantage that would counter just the fact that you have no bloody wires.”

“I like to keep both. While I do prefer the wireless as they’re very convenient, I sometimes do forget to charge them.

So having the wired ones as a reliable back up is nice, though they can get in the way of things and you’re overall more restricted in movement, especially during jacket season.”

“I held off on wireless headphones for quite some time.

But the reality is AirPods are super convenient (easy to switch between devices, you can get up and walk around without carrying your device, no cord getting tangled up).

In terms of sound quality, voice quality and avoiding the hassle of having another device to charge… yes wireless are definitely better.”

Tell us what you think in the comments: wireless or wired headphones…