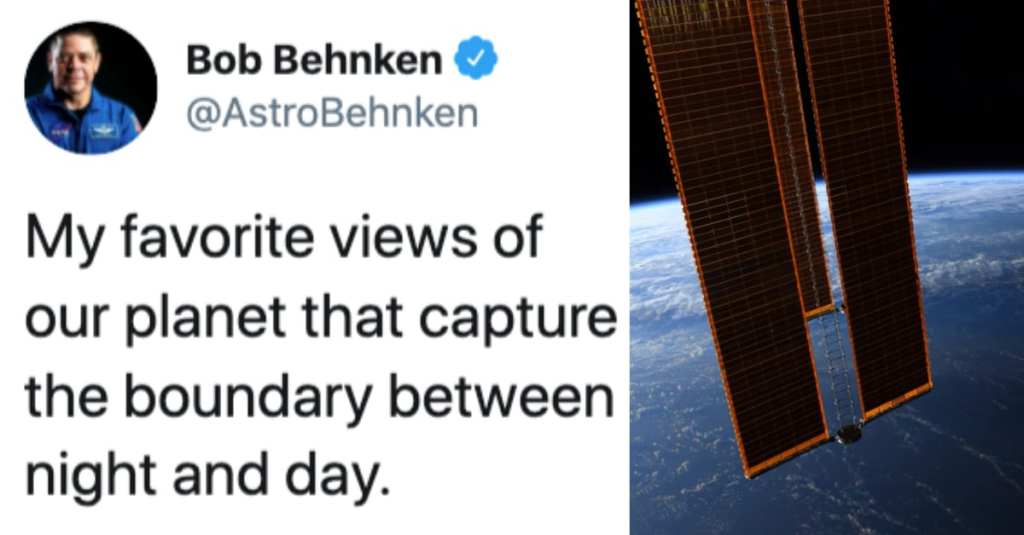 Can you imagine seeing the world from space? Doing so must be mind-blowing and yet make everything seem so small and insignificant.

It’s easier than ever for astronauts to share photos of their space exploits with all of us via social media, and they often do just that. One U.S. astronaut, Robert “Bob” Behnken, shared his out-of-this-world views from onboard the International Space Station.

Who’s ready for a spacewalk? pic.twitter.com/XcVAVmcg5T

He recently posted two breathtaking pics showing the boundaries between day and night, which went viral in a matter of hours.

My favorite views of our planet that capture the boundary between night and day. pic.twitter.com/Jo3tYH8s9E

Of course, the photo went viral and captured the imagination of those who saw it. How often do we get to see both at once?

Thank you so much for these photos! They inspire us to to dream while we hope to join you in space sometime in the future!

Some Twitterers even made flat Earth jokes.

But…But ….The earth is flat😢 pic.twitter.com/cMEkrrUqzO

Behnken went into space via the SpaceX Crew Dragon, which took off from NASA’s Kennedy Space Center in Florida on May 30, 2020. He and fellow astronaut and friend Douglas “Doug” Hurley arrived at the space station the next day and set up camp for two months before coming back home.

The trip was one for the history books—the two men were the first ever to get to the International Space Station via a commercial spacecraft and the first to come back in a splashdown landing in 45 years. (As you remember, Space Shuttles landed more like glider airplanes.)

"Thanks for flying @SpaceX."

A 2:48pm ET, @AstroBehnken and @Astro_Doug splashed down, marking the first splashdown of an American crew spacecraft in 45 years. #LaunchAmerica pic.twitter.com/zO3KlNwxU3

As the trip was a success, we’re sure to see more photos and share more adventures with astronauts as they make their way too and from the International Space Station. And there will be trips to the moon, Mars, and beyond if SpaceX creator Elon Musk has his way.

What fascinates you about space exploration? Let us know in the comments below!