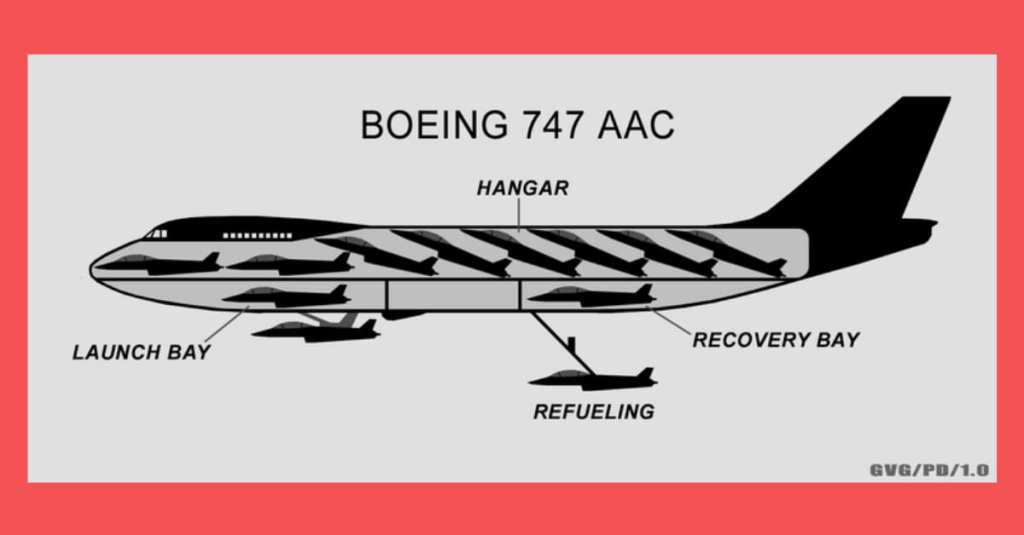 Yep, you read that headline right. In the 1970’s, Boeing launched an investigation into its 747 Jumbo Jet’s viability as an Airborne Aircraft Carrier (AAC). In other words, the aerospace company wanted to see if they could pack fighter jets into its largest commercial plane.

Why did Boeing want to do something like this? The answer is simple – it makes US military air power a whole lot faster and cheaper.

Boeing’s speculative AAC would have been able to carry, launch, and recover up to 10 fighter jets at a time. The design included an internal conveyor belt that sent two fighters in 80 seconds. The entire fleet would have launched in a matter of 15 minutes.

Here’s a drawing of what it would have looked like…

Although a flying aircraft carrier has never been created, the idea is critical in developing new military technologies.

Just imagine an entire fleet of fighter jets launching out of 10 gigantic airbuses. The concept is pretty cool – and extremely efficient. If a train of 15 loaded AACs started unloading all their cargo at once, a whopping 150 fighter jets would be ready and mobile in less than 20 minutes. That’s a pretty massive airborne armada in a relatively short amount of time.

So, why didn’t it happen?

Unfortunately, Boeing’s design ended up not being physically possible. No conveyor belt system had been invented or fitted to the 747. There were was no existing design of fighter jet that could have possibly fit into the belly of Boeing’s Jumbo Jet, much less 10 of them at once.

In fact, the idea of developing such a small crewed fighter jet also gave engineers some serious problems. With less space, they would have to sacrifice one of the following: speed, range, radar, or weaponry. Moreover, aircraft carriers became obsolete after the Vietnam War. The SA-2 Guideline, an air defense surface-to-air missile, proved to the US military that Air Force vehicles had much more to worry about than just other fighter jets.

Boeing’s AAC had no way to defend itself against those land-borne threats.

Still, Boeing’s vision lives on. DARPA’s “Gremlin” drone program is basically an offshoot of Boeing’s idea. These series of drones are carried and released from the C-130 Hercules – a plane that’s much smaller than a 747.

It makes sense that turbine-powered drones would win out over a new kind of fighter jet. They’re much more cost-efficient and way easier to make.

Who knows what the future holds, though? Plenty of things that were impossible in the 70’s are happening every day in 2020. There just might be a world where commercial aircraft carriers turn into heavy duty Air Force assets.

What do you think of Boeing’s original plan? Let us know in the comments below!