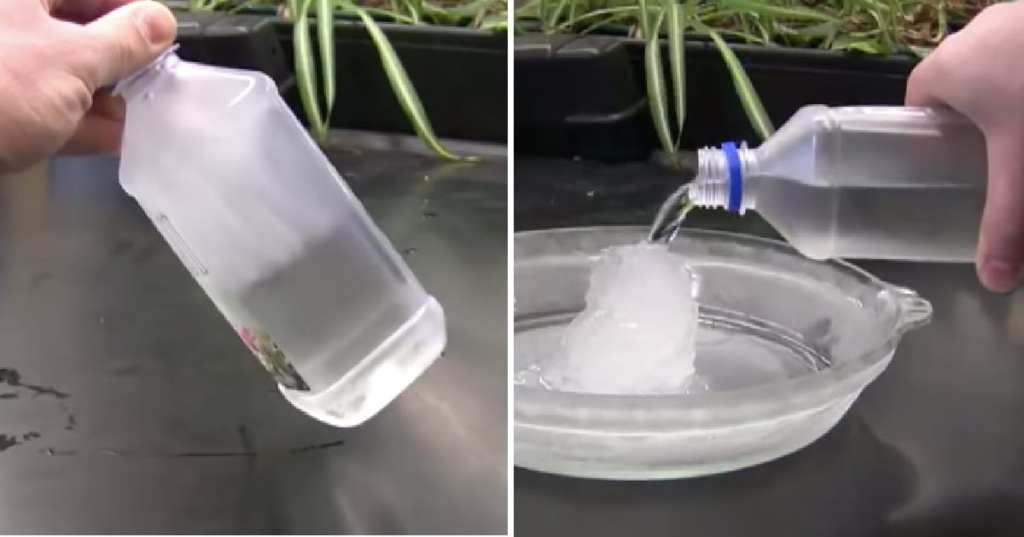 Check Out This “Supercool” Science Experiment You Can Do at Home

If you’re looking for a cool, fun, fairly easy science project to do at home with your kids, well, look no further.

And also, everyone loves ice, right?

As long as you’re not crunching it in someone’s ear, you’ll be fine.

What we’re talking about here is those videos where someone shows you what appears to be an ordinary bottle of cold water until someone shakes or taps it on a table and suddenly, the entire bottle is full of ice.

It might look like magic, but it’s actually science. And not only that, it’s the kind that’s totally fine to do at home with your kids.

How it works involves a process called nucleation, which is required nay time a substance changes state (liquid to solid in this case). When there’s an imperfection in the substance, like dust in the water, it acts as an anchor (or nucleus) that forces the change.

One molecule forms an ice crystal, then more and more cling to the icy surface, and before you know it, it’s all ice.

And, since there’s usually more than one dust particle in your tap water, they all start freezing at once. It’s called heterogeneous nucleation. That said, you can create homogeneous nucleation – where there are no impurities in the water – and create “instant” ice.

Bottled water doesn’t have anything but water molecules inside, so it’s tough to get heterogeneous nucleation to happen. Even if you leave them in the freezer for a couple of hours, they will still be liquid – supercooled liquid – but not ice.

If you remove them carefully after 2.5-3 hours, then suddenly jostle them or whack them on the edge of the counter, the entire bottle will turn to ice.

Anything – air bubbles, a dent in the plastic – can act as a nucleus, and the water will turn to ice so quickly it looks instant to the naked eye.

You can also pour the supercooled water over an ice cube and let the cube serve as the nucleus; you’ll create a little tower of ice as you pour.

I’m definitely going to try this with my littles, because I want to see it myself!

What are some cool, safe experiments you’ve done at home with your kids? Share them in the comments!