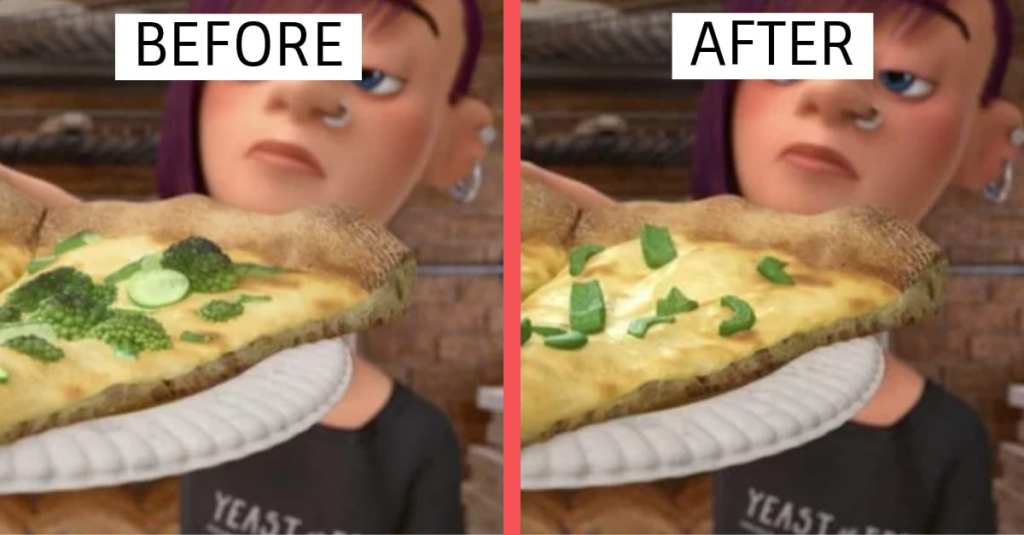 There are plenty of reasons to love Pixar movies. They’re always visually stimulating, with heartfelt, character-driven storylines that are sure to make you laugh and cry.

But Pixar also has a reputation for being incredibly detailed. Not just with how they design characters, but how they make the world their characters inhabit so real.

From the toppings on a pizza, to Easter eggs, I’m sure you’ll appreciate these 15 small details from Pixar movies you may have missed. 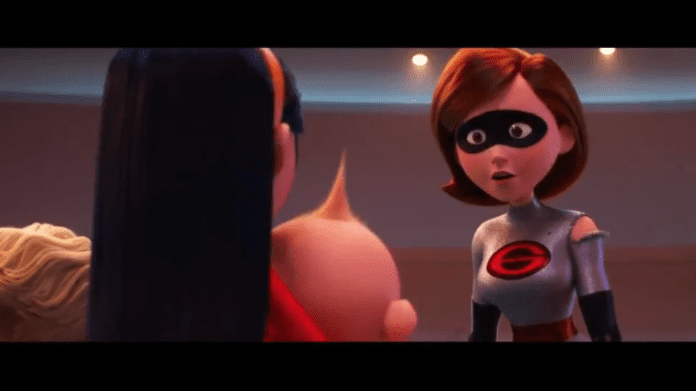 In the Incredibles series, our favorite family of super heroes always sources their super suits from Edna Mode: the eccentric fashion designer with a vast knowledge of science and engineering.

However, in The Incredibles 2, Elastigirl is gifted a new super suit by Devtech. As shown in the image above, Devtech’s suit is clearly not up to par with those of Edna Mode.

In this way, Pixar reenforces the superior intellect and ability of the small but confident Edna.

In the original Incredibles movie, there’s a scene where the character Dash, a young boy with super speed, runs across a vast expanse of water.

To get a realistic out-of-breath voice for this moment, director Brad Bird had voice actor Spencer Fox run four laps around the Pixar Studio until he got tired!

In Pixar’s Ratatouille, the 2007 film about a rat who dreams of becoming a Chef, the food critic Anton Ego proclaims, “I don’t like food, I love it…if I don’t love it, I don’t swallow.”

Early on in the movie, we see he is a slender man with rather hollow cheeks, but by the end of the movie it looks like his face has filled out a bit more, indicating that he is swallowing his food much more often!

Anton falls in love with the cooking of Linguini and Remy, and it has clearly made him a much happier man!

Another fun detail from Ratatouille: in the scene where Remy is sneaking around a home, we see the shadow of a dog bark at him. This shadow is none other than Dug from Pixar’s Up!

However, Up wasn’t released until 2009, two years AFTER Ratatouille! We got a sneak peak of Dug before we even knew what a good boy he was.

5. Pixar is a sink-or-swim sort of workplace

Finally, there is a scene in Ratatouille in which our hero Linguini is wet from jumping in the river.

Pixar had a crew member dress up in a chef’s uniform and jump into a swimming pool so that the animators would know how to properly animate this image. 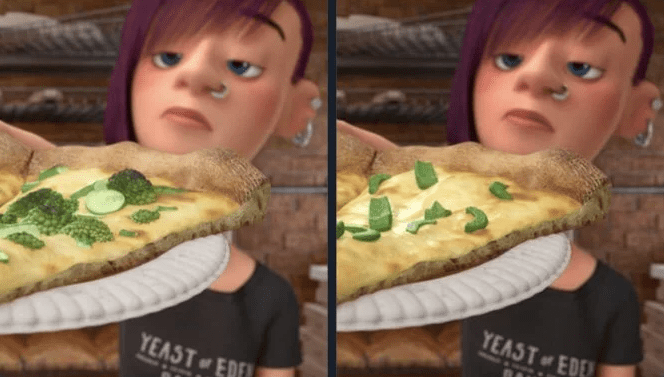 In Pixar’s Inside Out, there’s a moment where Riley is presented with a slice of broccoli pizza, and it’s just another reason to not like her new city.

However, when Inside Out released in Japan, Pixar changed the topping on the pizza to green peppers, because in Japan kids are more likely to hate green peppers.

Pixar made the joke specific to the audience, once again going the extra mile for their storytelling. 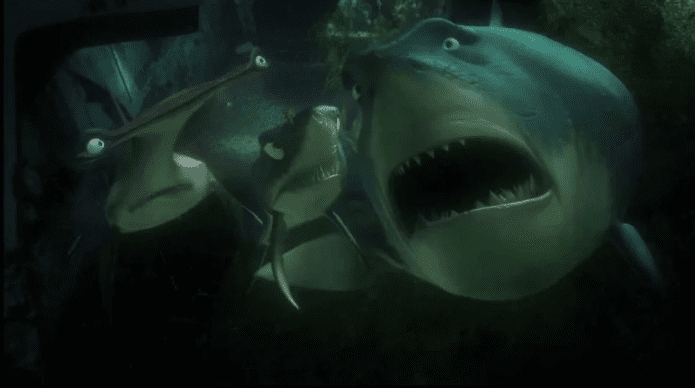 In Pixar’s 2003 film Finding Nemo, when Marlin the clown fish starts talking about his son, Nemo, Bruce the shark begins to bawl. He wails, “I never knew my father.”

Male sharks don’t stick around after mating with female sharks, so really, no baby sharks (do do do do do do) ever meet their fathers.

I see you Pixar, and I tip my hat to you.

8. It doesn’t stop with the sharks 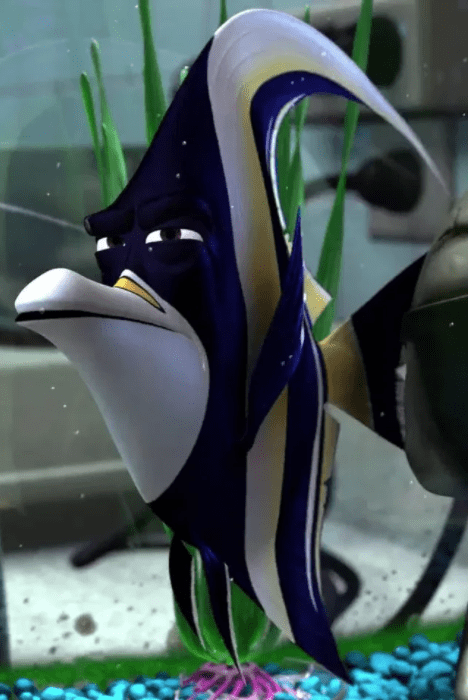 Again, in Finding Nemo we see another example of incorporating their research of marine life into the characters.

Gill the fish is a moorish idol, who has made more than one attempt to escape the fish tank.

This species of fish is known for not handling captivity well, so it makes sense that Gill would have the hardest time adapting to fish tank life!

Merida, our fierce and formidable heroine, has a mane of long, gorgeous red hair.

The new software allowed for 1,500 stands of curly hair to move together with Merida’s every movement.

And she is a very active girl, so there is quite a LOT of movement. 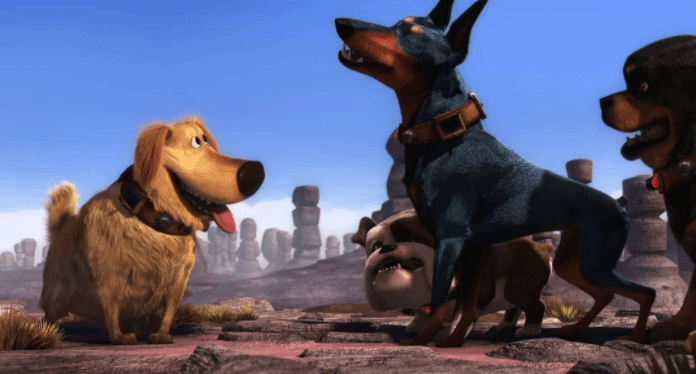 Back to Dug! In Up, Dug is the only dog successfully able to track down the tropical bird that Carl and Russell are after. This isn’t just by accident.

Dug is a golden retriever. He was born to track and hunt. All of the other dogs on the island are guard dog breeds. This is why they’re probably all so much better at guarding than Dug.

In a way, when Dug meets his two new favorite humans, he discovers his true talents. 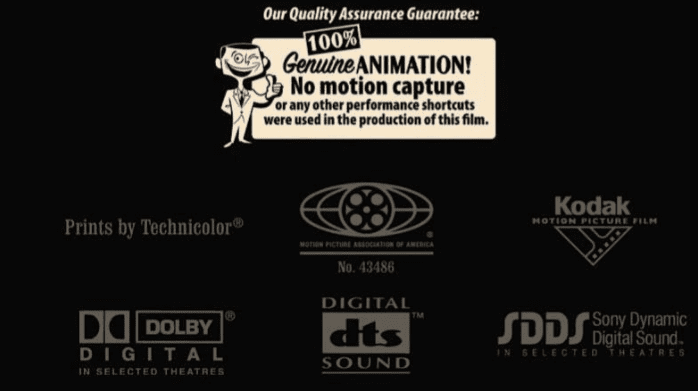 Let’s be real, most of us don’t really stick around to watch the whole credits when we go see a movie, unless we think there’s some sort of blooper or teaser at the end.

But at the end of Ratatouille, Pixar posted a “100% Genuine Animation” quality assurance guarantee, stating “no shortcuts were used in the production of this film.”

This might seem unnecessary, but it was a response Happy Feet winning the Oscar for Best Animated Movie instead of Pixar’s film Cars. Happy Feet utilized motion capture technology, while Pixar animates every frame manually.

I love Pixar’s version of throwing some subtle shade. 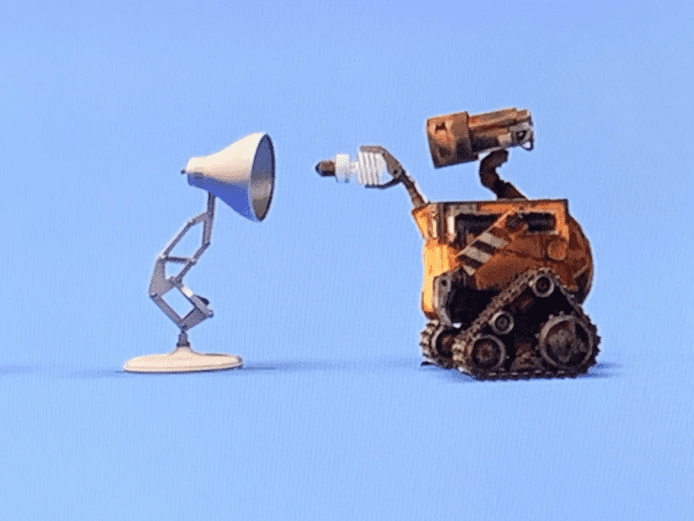 Finally, this may seem like an insignificant detail, but in Wall-E we see the Pixar logo lamp, Luxo Jr. (a character from a 1986 Pixar animated short), receive a new, eco-friendly bulb.

In upgrading Luxo Jr.’s bulb, Pixar is not only marking the passing of time. Pixar is reminding children and families all over the world that making environmentally sustainable choices matters.

Pixar is so brilliant when it comes to the details.

I personally love how thorough they are with their research and how they find ways to incorporate it into the storytelling. You don’t have to know sharks never meet their fathers to enjoy Finding Nemo, but for those in the know it makes the experience THAT much more special. And that’s the thing about Pixar movies. They always have that special element that keeps you coming back for more.

What’s your favorite Pixar movie? Let us know in the comments!