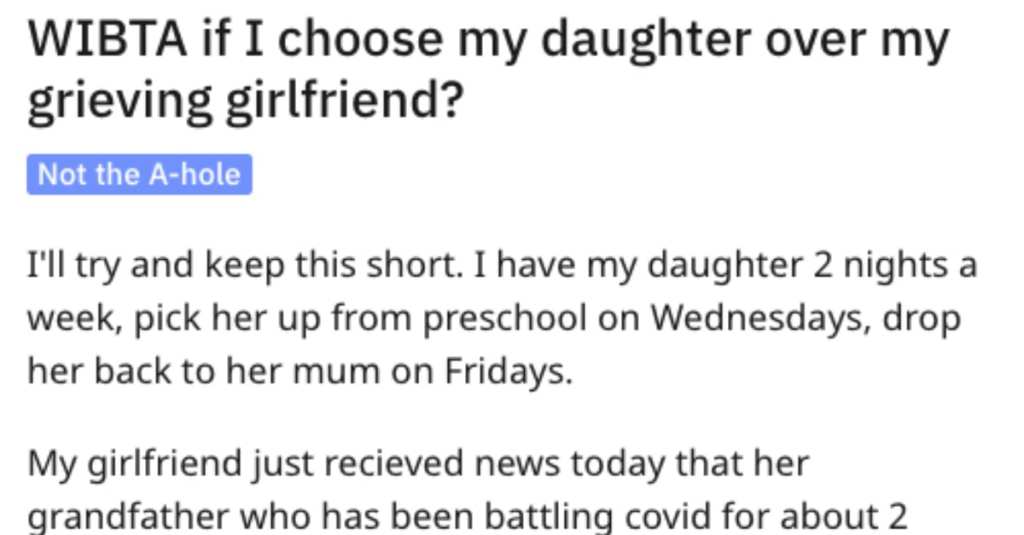 Relationships are hard across the board, but for parents who are juggling their children’s feelings against their own happiness in a new relationship, the road can be rocky indeed.

In this case, OP finds himself stuck between his young daughter, who he keeps a few days a week, and his girlfriend, who is losing her grandfather to covid.

I’ll try and keep this short. I have my daughter 2 nights a week, pick her up from preschool on Wednesdays, drop her back to her mum on Fridays.

My girlfriend just received news today that her grandfather who has been battling covid for about 2 months, is no longer responding to treatment and her grandmother has given the hospital permission to take him off life support either today or tomorrow. She’s obviously devastated, but more hurt by the fact that she can’t say goodbye, or be with her parents because of restrictions (she’s in a bubble with me and my flatmate).

The girlfriend understandably wants her boyfriend there as support, and because of her autism, prefers it to just be the two of them while she processes a complex situation and emotions.

OP tried to switch days with his daughter, but it wasn’t working out because of his ex’s plans.

She’s asked me to stay with her for a few days so she’s not alone, but I have to pick up my daughter tomorrow and my girlfriend has asked if I could not bring her as it’s too stressful to entertain a 3yo (my gf is autistic and has social anxiety) which I completely understand right now.

I asked my ex if I could not have my daughter tomorrow, maybe have her later this weekend or just resume next week, but my ex said no because it’s her BF’s birthday tomorrow and she was expecting to have a child-free romantic meal with him, and it’s not fair to mess my daughter’s schedule up. Which I also understand.

This all left OP feeling as if he had no choice but to be with his daughter as planned, which meant leaving his girlfriend alone during her time of need.

I can’t abandon my daughter obviously, but I dont want my girlfriend to be alone, I dont know what to do. I feel like I have no choice but to leave my girlfriend alone until Friday. WIBTA?

The commenters on this one were mostly understanding and some of them even had some fantastic advice.

Having a child is hard, but they have to come first no matter what. 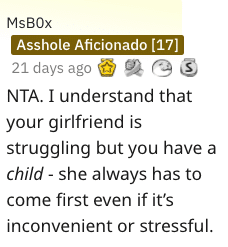 Most everyone agreed that no one was in the wrong here, it’s just a tough situation.

The mother and bf could definitely reschedule an anniversary dinner easier than the gf could reschedule her grief. Just saying. 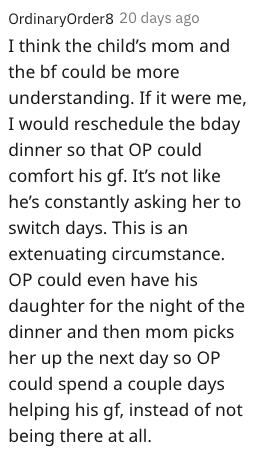 Some people suggested a babysitter, but others were quick to point out that, with covid, that would be less of an option. 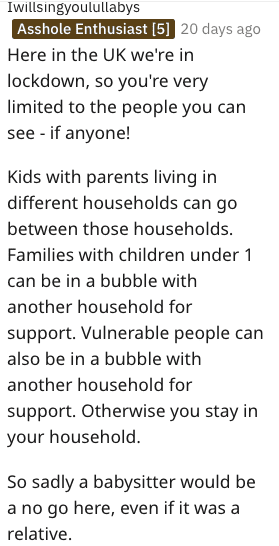 And hmmm, it does seem like there’s a bit of a double standard here. 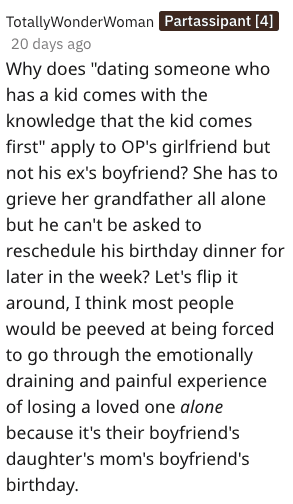 Luckily, they were able to work it out in the end, which is awesome.

UPDATE: My gf’s grandad passed away at 3am this morning. My ex finally agreed to keep my daughter for an extra 2 nights after speaking to my gf herself (and hopefully finding some humanity). My gf even asked to speak to my daughter to explain it herself so that my daughter didnt feel left out, and I am proud to say that my daughter took it very well (she was told that her mummy’s grandad has gone up to heaven, and so has my gf’s grandad).

I am picking up my daughter after preschool on Friday and keeping her for a whole week as it is half term next week, so it kinda worked out for the best! I did what many of you suggested and we’ve ordered her favourite food, and I surprised her with some flowers, we’re now cuddled up in front of the tv watching the latest episode of WandaVision.

She has been very grateful and has even asked if she can stay this weekend while my daughter is here to make up for lost time, so all’s well that ends well I guess! Thank you to everyone.

I wish more of these AITA posts ended up like this!