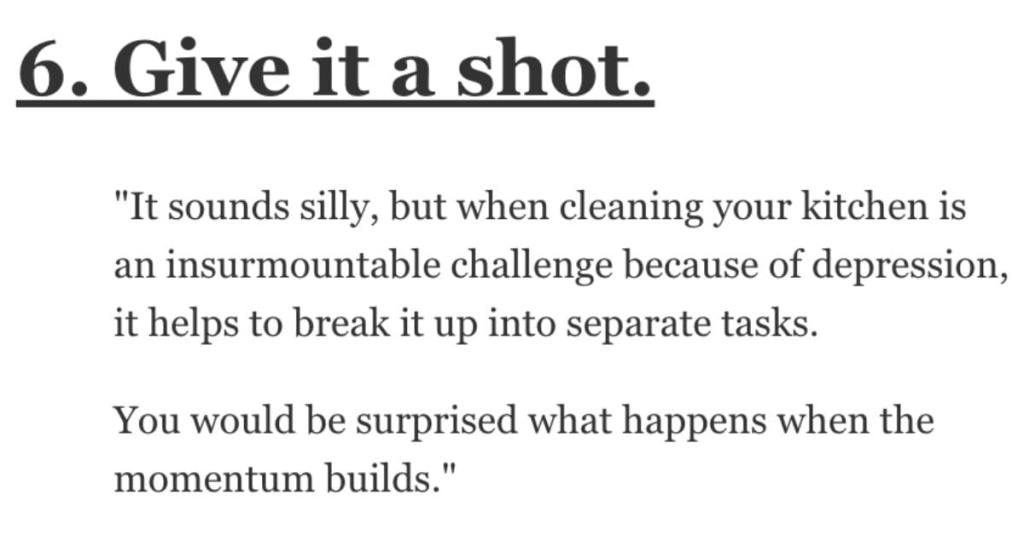 Depressed People, How Do You Motivate Yourself to Get Things Done? Here’s What Folks Had to Say.

If you spend time around people who suffer from depression or you’ve experienced it yourself, you know that even the smallest task can seem impossible.

Like taking a shower or making some food or going to the store.

So it’s helpful to learn from people who have been there about how to get up and try to make the best of the day.

How do you motivate yourself when you’re depressed?

“I have found a way to trick me into doing stuff: If I’m lying on the couch, basically feeling like complete s*t but I know I should rather go buy groceries and cook a meal I tell myself: I’m going to feel like sh*t no matter what.

If I continue lying here, I’ll feel like s**t, if I go buy groceries and cook, I’ll feel like s**t. The only difference is that doing stuff and being active will probably help me long term. So if I’ll feel sh**ty no matter what, I might as well do the thing that will help make me feel better eventually.

It kinda helps me to deal with the s**tty feeling and I can get myself to do the stuff I should be doing. Doesn’t work all the time but often enough.”

“I pretend that I’m a robot to do very small singular tasks at a time.

I really get myself into the mindset that my own motivation doesn’t matter at all.”

“I just need to say, “stand there for ten seconds” is the absolute key to most tasks.

I realized that I did this while cooking with my husband. I do it every time Im about to tackle a project. I stand for 10 seconds and think about the tasks it takes to complete the project, and I create a game plan.

“Celebrating the little things. I’m currently trying to do “five a day”, and to non depressives they probably seem tiny but to me they are huge.

Like today I got showered, got dressed, made a lunch from scratch, went for a walk and put some laundry in the washer (bonus point, its hung up too!).

“Minimize things you are responsible for. If you have a hard time keeping things clean – it is easier with less things.

I just had to do a huge skincare/makeup purge and I had been holding onto expired things and feeling guilty about the money I spent.

I forgave myself and threw it all out and then treated myself to the replacements. I’d rather spend more on things I care for and enjoy than have lots of mediocre stuff.”

“It sounds silly, but when cleaning your kitchen is an insurmountable challenge because of depression, it helps to break it up into separate tasks.

You would be surprised what happens when the momentum builds.”

“I honestly just try to make the next hour, next few minutes, whatever amount of time, better for my future self.

Lots of “I’ll be glad I did this” even simple things like cleaning ONE mug at night so I don’t have to clean it for coffee & don’t feel SUPER pressured to just do all the dishes right when I wake up.”

“I have a little mason jar, every time I do something, like eat breakfast, take a walk, I add a dinosaur to a jar, I also use this for self harm as well, if I haven’t hurt myself in a week, I get to add in some dinosaurs.

It makes me super happy when I drop in a dinosaur and hear it * clunk * together with the other ones.”

“I make myself go one notch above where I’m at mentally. If I’m feeling productive, I try to do as much as possible.

If I only feel like being a couch potato, I try to at least go for a walk or something. If I don’t want to leave the bed, I try to at least take a shower. Just one thing more than what I wanted to do. That usually then follows with “well I already did that, I may as well do this”.

And if I really have a day where I don’t want to get out of bed, well I give myself permission to do that too. Some times, that’s what I end up really needing.”

“Sounds stupid and super weird but silently imagine you’re being recorded for a tutorial or a time lapse for simple tasks.

I know it’s stupid but when I’m so down and everything I do seems so tedious I imagine this.

I describe what I’m doing in my mind as I’m doing it as if I’m teaching someone else.

It just makes it more entertaining to cook or do my daily routine.”

“If something is worth doing, it’s worth doing poorly.
A perfect example is brushing your teeth: Haven’t brushed your teeth in months? Just go to the sink, stick the toothbrush in your mouth, and scrub for a few seconds. Don’t aim for perfection, just give it a half-a**ed attempt for 5 seconds.

And also, do things one step at a time. Getting out of bed does not equal you needing to clean the entire house, but maybe that coffee table needs to be tidied up a bit? Maybe toss the dirty dishes in the dishwasher, but it doesn’t need to be run today.

Point is, you’re doing things that have positive rewards to them. You’ll start to see those rewards as something you want more of. Eventually, cleaning will become less and less of a chore, and more about keeping the things you have clean and nice looking because you actually like them.

Wallowing in bed really is counterproductive, but wallowing in bed one day isn’t something to beat yourself up over. Learn to forgive yourself and keep reminding yourself that bad days are ok to have.

Things are going to get better.”

Have you ever dealt with depression?

If so, how did you do get motivated?