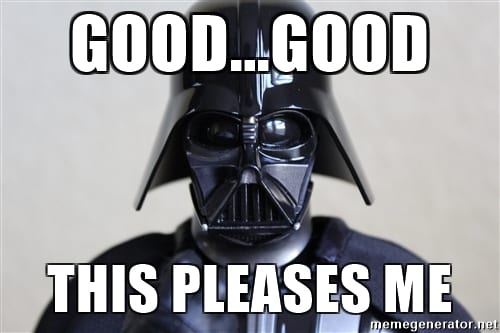 This Just In: Electric Eels Can Use the Force, Darth Vader Style

There’s a new understanding of how electric eels can control their prey, and Darth Vader would be very proud.

Electric eels are best known for being… well… electric. Until recently we thought we had them pretty thoroughly figured out. They go hunting, they zap their prey senseless, then they eat it. But recent research has revealed that their abilities go far beyond that. It’s been found that electric eels can control the movements of other animals with their electric powers.  They come from the Dark Side, and they will straight up Force you to death.

Electricity is basically everywhere, inside the bodies of all living things. Our muscles are controlled by signals sent through neurons. These neurons ‘talk’ to the muscles with tiny electric jolts. That’s why we lose muscle control when hit with an electric shock. The surge overwhelms our small, normal electric jolts with a big, ball-buzzing slew of them.

Electric eels can take full advantage of this. They’ve learned how to hit prey with specific types of electric shock that make their hapless victims’ muscles do different things. For example, if they want a speedy fish to hold still they hit it with a continuous shock that completely paralyzes it, making it super easy to catch.

If they’re still looking for prey, they’ll release small pairs of electric shocks into the surrounding water instead. When hit by these, animals will twitch involuntarily and give away their hiding places. As far back as the 1970s, scientists realized that an electric eel in an empty aquarium will swim around giving off these small double-shocks. It was only recently, however, that we learned they do this just in case there’s a tasty friend hiding nearby.

What makes this such a lethal hunting mechanism is that there’s no defense against it. It’s simply not possible for fish to avoid the electric remote control shocks, and when hit, their bodies are no longer under their control. Combined with the ultra-fast eel attack speed – they can strike at prey in about 20 thousandths of a second – electric eels are one of nature’s ultimate predators, and the original evil geniuses.

Let’s just be grateful that evolution focused on the electric eel and spared us from having to deal with electric grizzly bears.  Although running into this face wouldn’t necessarily be any better…