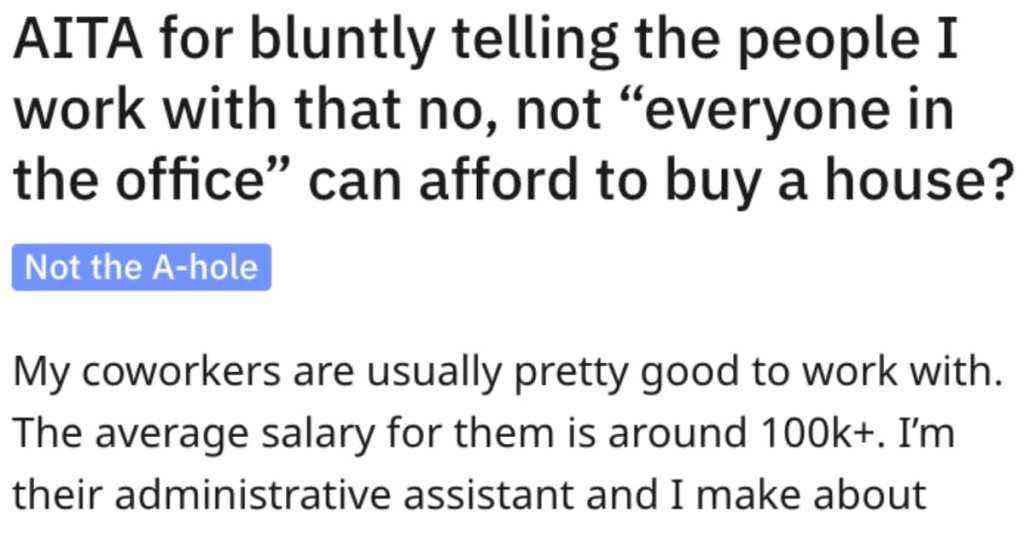 Employee Tells Co-Workers Not Everyone at Work Can Afford a House. Did They Act Like a Jerk?

It’s kind of interesting how sometimes you can find yourself in a situation where folks assume that everyone has a lot of money. Or even enough money to get by…

And, the truth of the matter is that not everyone out there can afford to buy a house.

A person took to Reddit’s “Am I the *sshole?” page to share their story and to ask the readers on that forum if they were wrong for their actions.

AITA for bluntly telling the people I work with that no, not “everyone in the office” can afford to buy a house?

“My coworkers are usually pretty good to work with. The average salary for them is around 100k+. I’m their administrative assistant and I make about $32k. Anyway some of the things they say are kind of weird.

For example this one woman was shocked that I’d never had any of my clothes tailored before. I think they just really caught up in their own reality you know? Like in their world everyone is beautiful and skinny and rich with purebred dogs and perfect white teeth.

I was helping organize and someone announced they finally bought their first house. The conversation continued on to them kind of being rude and saying like “I don’t get why people think no one can afford to buy a house, it’s not hard?” and someone was like “Yeah I can’t imagine being in my 30s and still renting, I’d feel like such a failure” and they all agreed.

I don’t usually get upset about the sh*t they’re talking about but I finally had it and was like “I’m 38 and rent, I don’t think I’m a failure”

One of them was like “Oh well we weren’t talking about you, it’s just that all these people always go on and on about how it’s impossible to save for a down payment.”

I was just like “Yeah, it is pretty hard.”

It was obvious the whole atmosphere in the room changed so I was like “Anyway” and got up and left to the main office to get back to work. Later on one of the other women in the office came up and was like “Hey I’m sorry about earlier I didn’t mean to offend you. It got kind of awkward in there.”

I said yeah, it was pretty awkward listening to them talk about how they’d feel like a failure if they were in my shoes. She said that’s not what she meant, she actually meant that it felt like I was trying to call attention to the wage gap like it was their fault, and that if I wanted to better myself they could help me figure out how to apply to schools and work my way up just like they did.

I said a kind of half-hearted “thanks.” It’s been weird in the office since then. I know money is one of those no-no topics but it’s not like it’s a secret that I only make what I make.

We don’t have HR and this really isn’t an HR thing.

Here’s what people on Reddit had to say about this.

This reader said that these folks obviously live in an echo chamber and don’t get a whole lot of exposure to other people. 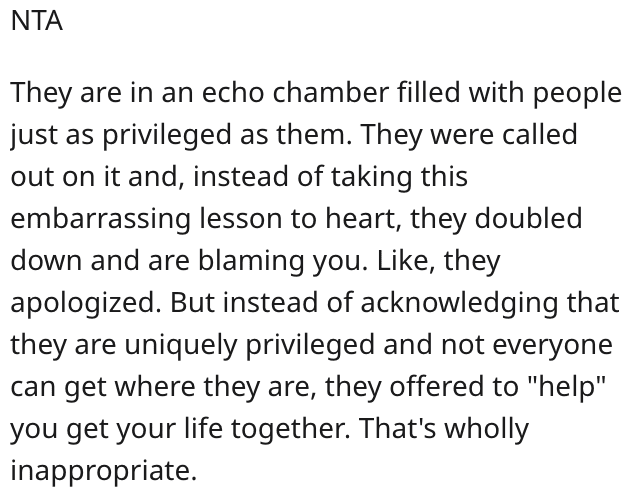 Another reader said this kind of attitude is why nothing ever really changes for a lot of folks out there as far as income goes. 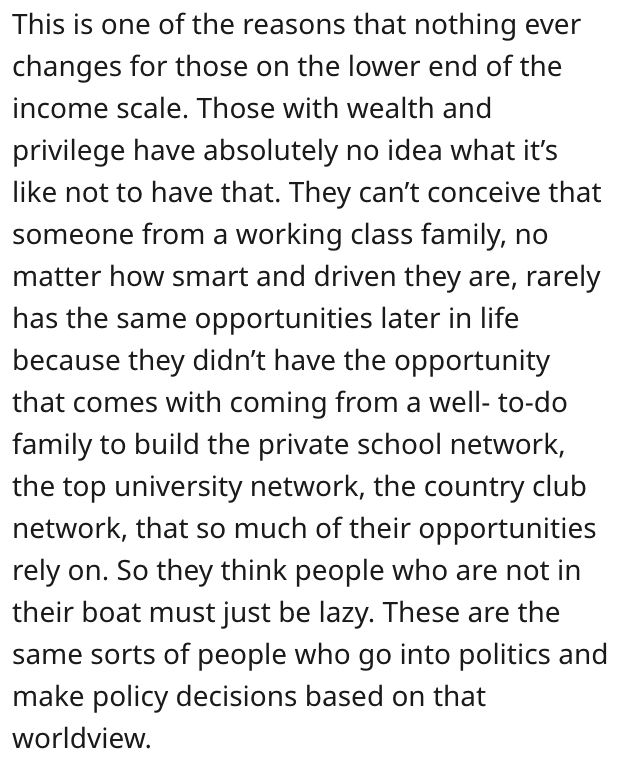 This Reddit user made it clear: this person was not wrong in their statements and the people in their office deserved to be called out.

And this individual had a unique take on the conversation: it was flat-out condescending.

What do you think of this person’s actions?