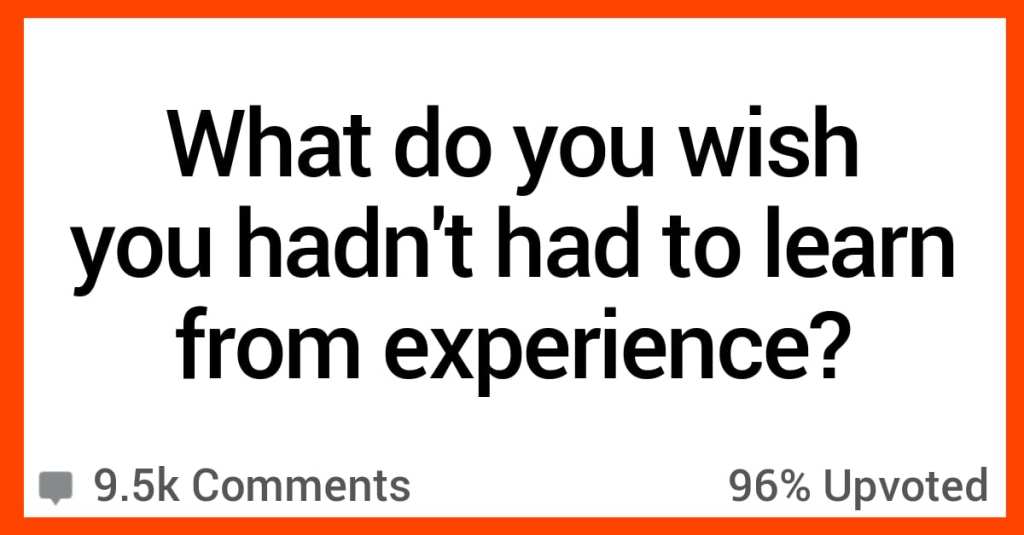 Experience Is a Great Teacher, But These People Wish They Hadn’t Learned These Things the Hard Way

Which is why so many of us make the same mistakes, have to learn the same lessons, despite literal generations of other humans living similar lives before us – and being willing to pass along their knowledge.

We want to believe we know better, but these 15 people are here to say there are times they sure wish they had been willing to listen instead of insisting on experiencing everything for themselves.

Disclosing any mental health issues to your employer can and will be used against you.

I hope everyone that’s replied who’s had or having issues with their employer finds somewhere they’re safe and accepted.

It’s illegal to ship food from Australia to South Korea. Thankfully the post office worker made sure to check what I was shipping, or I could have ended up in serious trouble.

Fun fact: You are also not allowed to keep non-native invert/reptile species in Australia and NZ. Which is extremely fun, Australian native species tend to be much more spicy (read much more venomous) than other species around the world.

Want a ‚beginner‘ species that won‘t send you to the hospital with a bite/sting in Australia? Good luck.

Having a kid with special needs requires a very patient and prepared parent. My brother has special needs and my parents have been worn down because of it. They are both borderline alcoholics partly due to the stress involved of it and many arguments are created because of parenting disagreements.

Basically it can really complicate family dynamics. I tend to keep to myself to avoid the arguing and constant conflict.

note: I love my brother and I am not trying to sound insensitive here. Just trying to shed some light on a perspective not touched on often.

12. This goes for pretty much everything.

Ever gotten headbutt in the thigh by a goat? It’s all fun in games when you are “wrestling” until it pulls one of those on you hahaha

That even the worst food does not taste like shit.

I grew up on a farm. There are a lot of instances one can find out what shit tastes like in that context, and because it’s the internet, I need to note that all of those instances are purely by accident in my experience.

I don’t judge what someone else wants to eat, but in my life, this has not been intentional. LMAO

You can do everything right and still not make some people happy; only almost happy.

It’s designed like a dangling carrot juuuust outside of your reach. With just one more push, you may be able to grasp it, but you won’t because it’s impossible.

If you stop trying to grab the carrot, you will upset them. That’s a price worth paying.

9. This one comes for everyone eventually.

I am not as smart as I thought I was as a teenager.

The older I get, the smarter I used to be.

8. Not everyone can be pleased.

I work i heating and cooling sector. Best you can get is 95% of people happy. 5% will always complain (too hot or too cold).

To be fair, with that mindset you might want to join the porridge industry. Only having 5% too hot/too cold is exceptional, usually only 1/3 are just right.

Never assume u have lot of time.

6. Believe people when they tell you who they are.

Don’t make excuses for someone else, or forgive them repeatedly, people are perfectly aware of what they are doing, and by forgiving them you let them take advantage of you.

5. Know what you’re dealing with.

It doesn’t matter how much you give to a narcissist; they’ll always expect more.

Holding on to anger only poisons you.

When you’re hurt and backed into a corner suddenly everyone becomes an enemy.

3. I definitely don’t want to learn this firsthand.

Falling into an ice fishing hole is very cold.

2. You can’t make other people do anything.

Never make someone your “everything.”

Because when they leave, you’ll have nothing.

I think everyone older than 25 has a list of these things, right?

What’s on yours? Tell us about it in the comments!