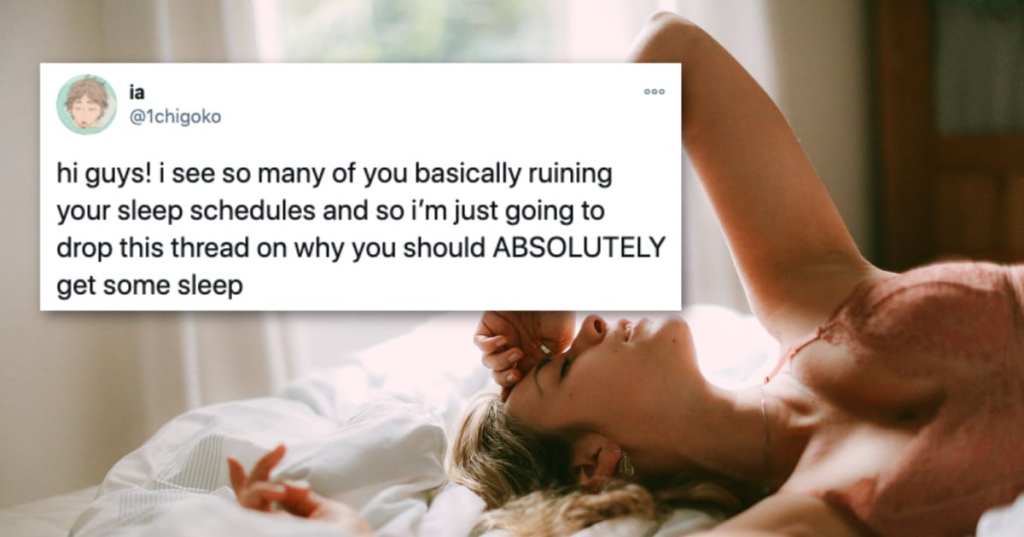 Pretty much every article about how to feel better, feel healthier, and generally enjoy your life more contains the advice to get enough sleep. Not just enough, either, but good sleep.

While there will be periods in our lives when this is all but impossible for one reason or another (like a new baby), it really should be a priority for every last one of us

This Twitter thread explains why, especially now, it’s so important.

hi guys! i see so many of you basically ruining your sleep schedules and so i’m just going to drop this thread on why you should ABSOLUTELY get some sleep

Number one? Your health! Current health crisis aside, chronic sleep deprivation can affect Alzheimer’s chances, the development of pre-diabetes, and wreck your immune system.

Your arteries and your waistline could suffer.

It could put your mental health at risk, too.

– if you’re trying to diet, your weight loss won’t come from your fat, it’ll come from lean body mass (so its pointless)
– countries whose citizens get the least sleep also have the highest rates of physical diseases/mental disorders

And if you’re already struggling, not getting enough sleep could make it all that much worse.

– a study showed a 60% amplification in emotional reactivity to negative stimuli in sleep deprived individuals
– poor sleep worsens the symptoms of various mental conditions such as depression, anxiety, suicidality

Not only that, but it could affect the people around you negatively, too.

– mri scans show decreased ability for the pre-frontal cortex (the brain region that regulates our emotions, is responsible for rational thought) to control the amygdala (associated with aggressive emotional response), making it difficult for people to control negative emotions

And you’ll experience mood swings that won’t be fun for anyone.

– mri scans show decreased ability for the pre-frontal cortex (the brain region that regulates our emotions, is responsible for rational thought) to control the amygdala (associated with aggressive emotional response), making it difficult for people to control negative emotions

If you are or have a young adult in your house, sleep is doubly important, and too many of them don’t get enough.

– poor sleep can be connected to aggression and hence bullying/violence
– there is a link found in adolescents between poor sleep and s**cd*l thoughts, attempts, and contemplation

– because sleep loss also increases activity in the reward center of the brain, we are more susceptible to addiction
– sleep loss has been shown to be a reliable determining factor in the possibility that a child will develop an addiction in adolescence, adulthood

And yeah, there’s a reason it’s used as a torture device.

So, do your best in these trying times, my friends. There are many things we can let slide, and things we can course correct later, but taking the chance to catch some extra zzzz’s when you can is never going to hurt.

In fact, if these tweets are right, it could definitely help.