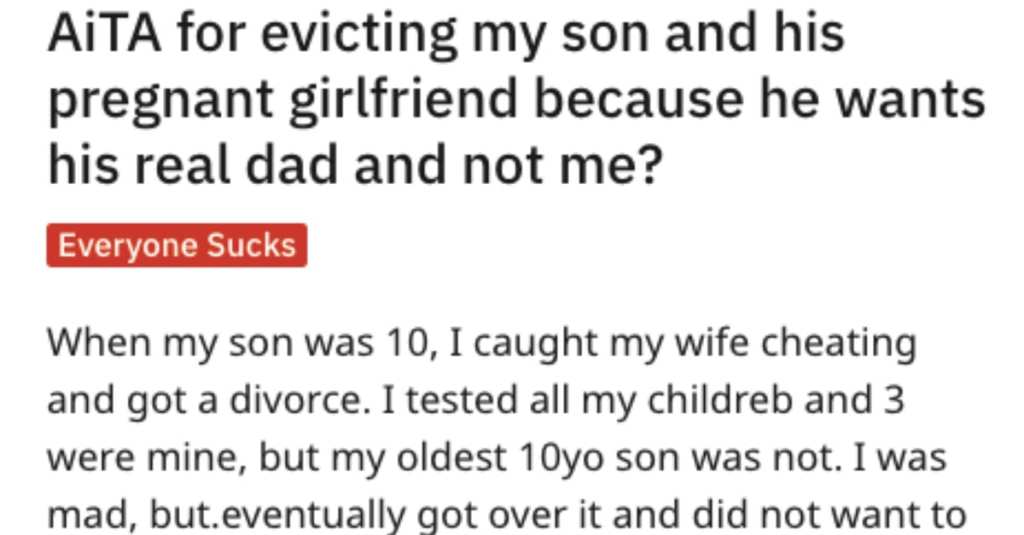 Parenting is a tough gig, and as someone who has been a stepparent, I can promise you it’s not any easier than dealing with kids you biologically created. It might be harder, in some ways.

That said, if the adults in the room can keep their petty jealousies out of it, so much the better.

This is the tale of an accidental stepparent – he found out that his oldest child was the product of an affair, but chose to treat him the same as his other siblings.

When my son was 10, I caught my wife cheating and got a divorce. I tested all my children and 3 were mine, but my oldest 10yo son was not.

I was mad, but.eventually got over it and did not want to treat him separately than his siblings at first.

His ex-wife told her son about his biological father and the two of them formed a relationship as he aged. The son, according to OP (original poster), would rather have his “real” dad in every situation.

This is even after OP agreed to let his son and his pregnant girlfriend live with him when they had nowhere else to go – but the kid still brags about his “real” dad, got him a “grandpa” t-shirt, etc.

Unfortunately, his mom told him about his biodad against our agreement and at 18 he started regularly calling and speaking to him. Well he 20 now and he got a girl pregnant. Since she had no where to stay, i decided to let her move in with my son so they could continue going to college while raising their kid. Well, my son’s relationship with his biodad really took off i guess.

The emotions and.everything all came to a head recently at the child’s baby shower wherein he gifted his biodad a shirt that said grandpa on it. Moreover he has started occasionally calling me by my first name even in front of our other kids. He has sort of made it clear to me that biology is more important than the man who raised him.

So, OP is kicking them out, and essentially cutting them off.

So instead of giving them a gift on the baby shower i quickly drew up a 30 day eviction notice after a quick call with my attorney and replaced my present with that. Im just tired of the disrespect… but apparently he did not see it coming because he was completely blindsided.

I should also add that i have overheard him saying other things like “my real dad was a marine” and stuff when he thinks I’m not home. I told him to go live at his real dads house if he wanted. The only reason he doesn’t live there now is because its a single bedroom apartment. I am also going to stop paying his tuition next semester and just kind of cut him off completely.

AITA for evicting my son and his pregnant girlfriend because he doesn’t think of me as a dad anymore?

Is he wrong? Is the kid? Is everyone?

Basically, what we’ve got here is a lack of communication. 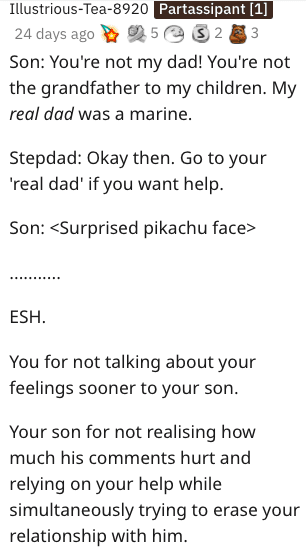 Other people thought the son had to have realized what he was doing was hurtful all that time. 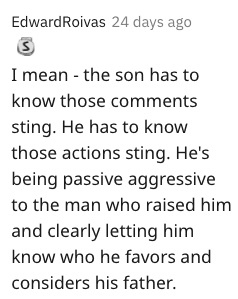 The eviction”gift” was definitely petty. 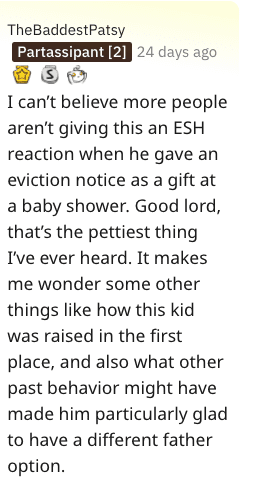 And as big of a jerk as the kid was being, he’s the kid. The adults in his life need to do better. 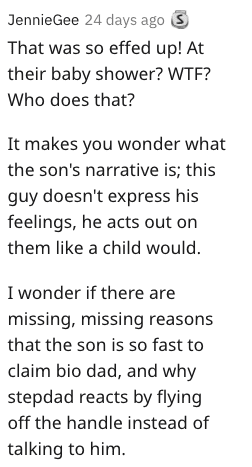 There definitely seems to be something rotten in Denmark. 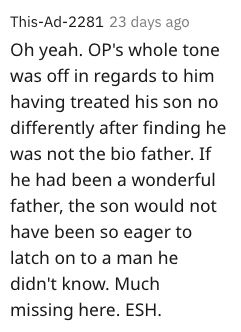 I think what we’ve got here is a good, old-fashioned dysfunctional family, y’all. Whee!

What are your thoughts? Drop them in the comments!