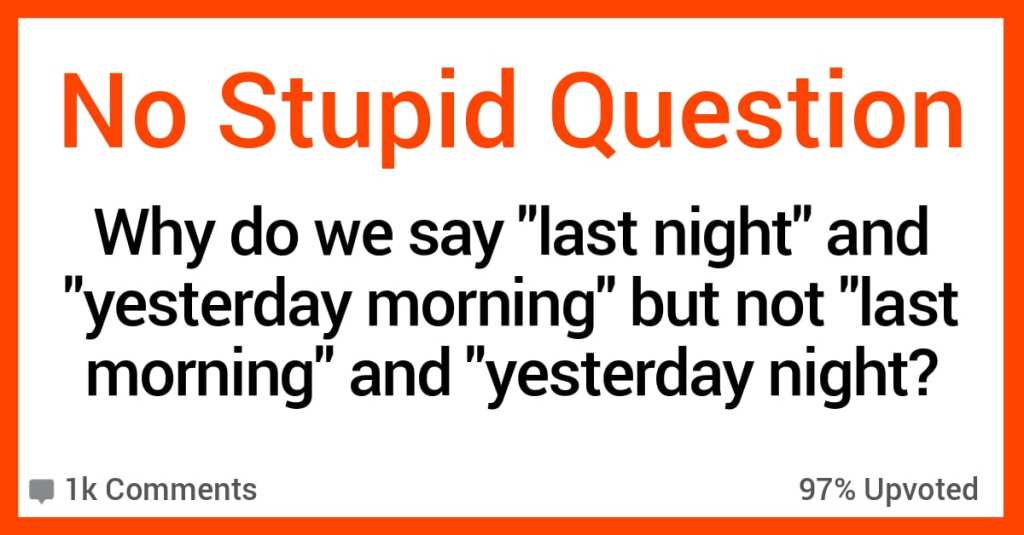 Guy Wonders Why We Say Things Like “Last Night” But Not “Last Morning.”

No one in the world would argue that English is a rough language to learn and to speak, and even those of us who grew up speaking it often have questions about why things are the way that they are.

For instance, why do we say “last night” but not “last morning?”

If you’re curious, well, read on – these 13 people have some thoughts.

13. Are you time traveling.

Night would be the last part of the day, so you could say it any time today and it would be correct in its meaning of yesterday night.

Last morning would only be able to be said in the morning, because if you said last morning in the evening, it’d be today’s morning.

Collocations. Basically, those words are just usually grouped together that way and anything else sounds weird.

Yesterday is a specific day you’re referencing. Last is just referencing the most recently past, which could be today.

Also, I’ve said yesterday night before. It’s not that weird.

9. As long as you’re consistent.

To add to this… yesterday night just sounds awkward. If anything, it should be yesternight.

How about “this weekend?” I always feel the need to specify past or coming.

5. There’s always gotta be one.

From now on, I’m adding the following words to my vocabulary: “yesternight,” “yestermorn,” “yesterforenoon,” “yesterafternoon,” and “yesterevening.”

Yesterday night doesn’t really sound that incorrect to me??

“Yesterday night” I suspect isn’t common because it’s a mouthful and has the words “day” and “night” together which is confusing as you have to work out for a moment if it’s day or night you’re talking about.

It’s weird, some people think it’s normal English and wouldn’t notice if someone else used it, but to others, it sounds totally foreign.

Anecdotally, I think people who are either not native speakers of English, or are native speakers but grew up around people who did not speak English, are more likely to use “yesterday night”. I definitely hear white Americans use it sometimes, though.

Technically last should be in reference to only the morning part so as long as it is afternoon the last should 100% reference the same day. However a lot of times when talking about something that modifies days we let the time modify day as well. For instance I might say “this morning” even though it is 2 pm. I think we recognize the ambiguity naturally and instead use yesterday since that tells us what day we are talking about out right and we have this for today anyway.

Last night doesn’t have this problem however since the last night always crosses the day time frame.

I will add one other thing as an aside, yesterday will reference day + night if there isn’t a time frame but most people don’t generally picture night time as an option. Which is why I don’t think you hear yesterday night, though yesternight sounds fine but old timey.

I really loved delving into this one!

What are your thoughts? What are the language things that stump you?