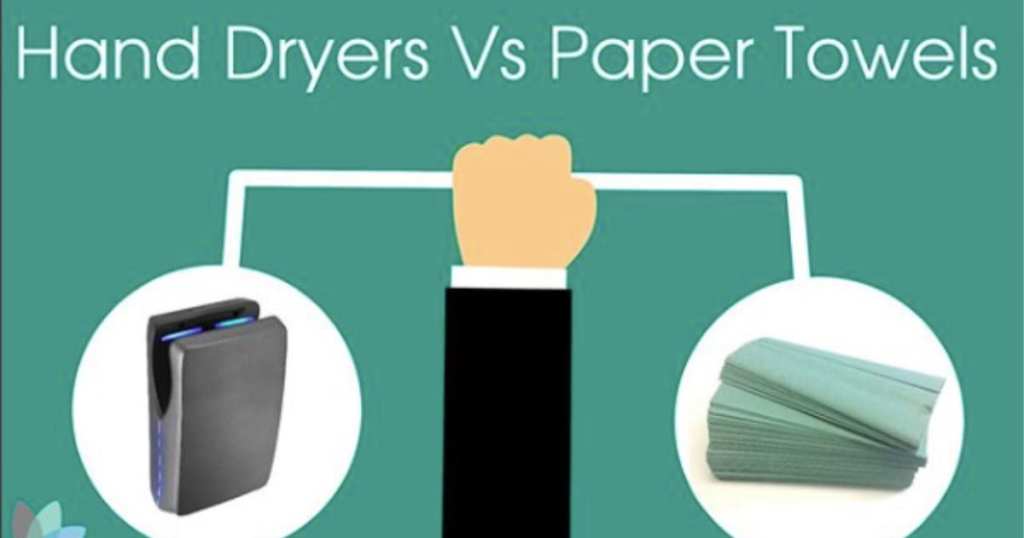 There’s not a lot that makes you feel good about public bathrooms, but when the hand dryer replaced towel dispensers that you have to touch, I’m sure people felt pretty good about having clean hands and fingers when they left a restroom.

I mean, you don’t have to touch them, they blow hot air…how could that not be sanitary, right?

To understand why they’re not, we first need to agree that most people don’t wash their hands correctly or for long enough – which means that when they’re done washing and ready to dry, there are still germs all over their hands.

In 2014, a research team from the University of Leeds announced that they’d found that hot air dryers are disturbingly good at blowing those germs off of people’s hands and into nearby surfaces in fairly large quantities.

They re-created public washrooms in their labs that included jet-air dryers and paper towel dispensers, and found that the dryers introduced 27x more bacteria into the air than the paper towels. Not only that, but the microbes circulated for 15 minutes afterward.

Now, the authors have gone into the real world for their experiments, and the news for hand dryers are even worse.

Professor Mark Wilcox and his team conducted their experiment in hospitals in Leeds, Paris, and Udine (Italy) over a 12-week period, using samples from restrooms frequented by patients, staff, and visitors. They sampled the surfaces in the bathrooms every day for four weeks – only offering a jet-dry option – then waited two weeks and repeated the experiment, offering only paper towels for hand-drying.

The results, reported in the Journal of Hospital Infection, revealed that the total amount of bacteria was consistently higher in the restrooms where jet dryers were being used, with the most dramatic differences seen between the surface of the jet dryer and the surface of the paper towel dispenser – in Italy, it was 100x higher on the jet dryer, in Paris, 33x, and in Leeds, 22x higher.

In Leeds, the worrisome methicillin-resistant Staphylococcus aureus (MRSA) bacterium was found three times more frequently during jet-dryer periods then when paper towels were stocked instead, and other species of pathogens that are resistant to antibiotic treatment were found in higher instances, too.

“Consequently, we believe that electric hand dryers are not suited to clinical settings, and, as such, existing (e.g. NHS) infection control building guidance needs to be amended and strengthened.”

French health officials updated their guidelines after the previous research came out, discouraging the use of air-dryers in clinical wards, and U.K. hospitals have followed.

Paper towels are so much better, Wilcox says, because they “absorb the water and microbes left on the hands and it they are disposed of properly there is less potential for cross-contamination.”

So, there you have it – wiping your hands dry is better for you, since there’s a good chance you’re not getting all of the microbes off while washing, and it’s better than everyone else, because a dryer isn’t blowing your germs all over the bathroom.

But, you know, try figuring out how to wash your hands properly. I feel like that’s something more than 10% of the human race should be able to figure out.