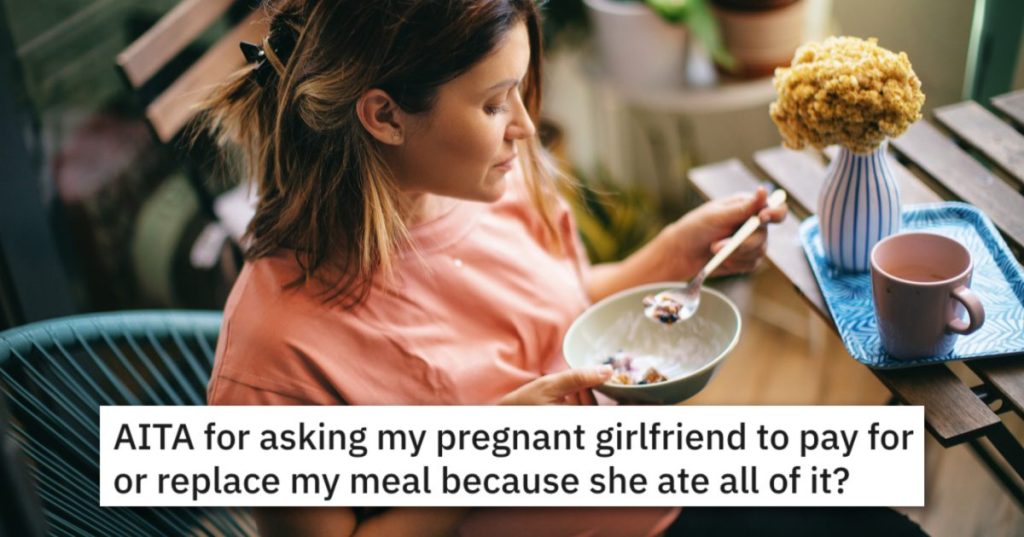 He Asked His Pregnant Girlfriend To Replace The Food She Ate. Should He Have Been More Supportive?

People who are pregnant get a lot of passes in life, and rightfully so. They shouldn’t have to stand if they can (and want to) sit, we should accommodate their cravings if we can, and in general, the people supporting them usually go out of their way to help them feel comfortable.

So, when you see the title to this post, you might be ready to be on the girlfriend’s side, not OP’s – but just take a read first.

OP’s girlfriend is not pregnant with his child. She is a surrogate for her sister and her brother-in-law, a situation she and OP discussed when they first began dating. He’s fine with it, and even though they don’t live together, he tries to keep some of her go-to cravings on hand.

I’ve (26M) been with my girlfriend (29F) for going on two years. Before we ever met she and her sister had been working on her being a surrogate for her sister and her sister’s husband. Global things delayed that, we talked about her agreement before we got together and now she’s pregnant for them.

She is staying with them for now but she comes over to my place frequently to spend time with me when she’s free.

Its not so bad but either she raids my kitchen or she complains nothing looks good and wanted me to keep some of her for-sure cravings on hand.

Recently, his parents stopped by and brought one of his favorite meals as takeaway. He wasn’t super hungry and so put it in the fridge to have for dinner later.

When his girlfriend came over she asked whether or not she could have some. He said yes, but then she proceeded to take all of it, and also to doctor it in a way that made it unpalatable for him.

My parents came to visit me and asked me if I wanted them to pick anything up for me on their way. They had to pass one of my favorite restaurants to get here so I said yes. They showed up, we visited with each other.

I ate a little bit of what they brought me since I wasn’t really hungry yet and put the rest in the fridge for dinner that night.

My girlfriend wound up coming over for a bit after they left. She got hungry and wanted a snack, and came out with the container I put my leftovers in and goes “Can I have some of this?”

I told her yes. She came back with a plate and she didn’t take some of it, she took all of it and put all kinds of shit on it so we couldn’t even share.

He told her that since she took all of what he intended to eat for dinner she should send him some cash to order more or go and pick it up herself.

She said she didn’t want to, and he told her that it sure would be nice, considering they don’t live together and she’s not carrying his kid.

I told her that I said she could have some and she just ate all of what I intended to have for dinner so I asked her to either send me money to pay for so I could go get some myself, or she could make the drive and get me another order. She didn’t want to drive that far and she didn’t think she should have to pay me anything.

I told her she should because it’d just be nice of her to do since I get she gets cravings but it’s not like she’s pregnant with my kid or we live together.

She left angry, and later he got a text from his mother saying he needed to be more understanding and supportive since he doesn’t know what she’s going through.

She left at that point, left half the food uneaten and I wouldn’t eat it cause of what she put on it.

A couple hours later my mother called. My gf text her about what happened. My mom gave me an earful about how I have no idea what its like for my gf right now and I need to be supportive and let things go.

Is Reddit going to be understanding of her or him? Read on to find out!

The top comment says they don’t think that OP did anything unreasonable at all. 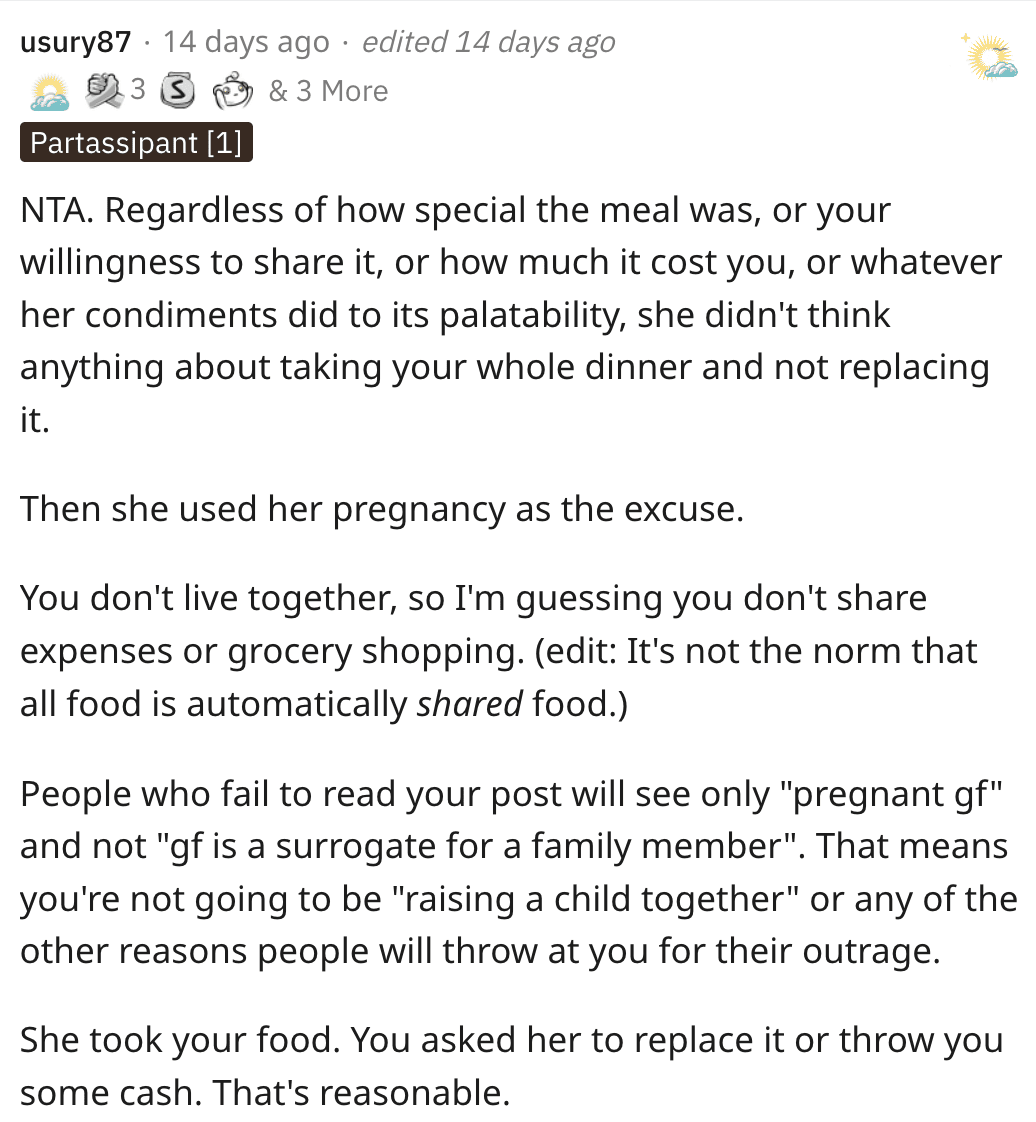 For some, it’s the complete lack of remorse. 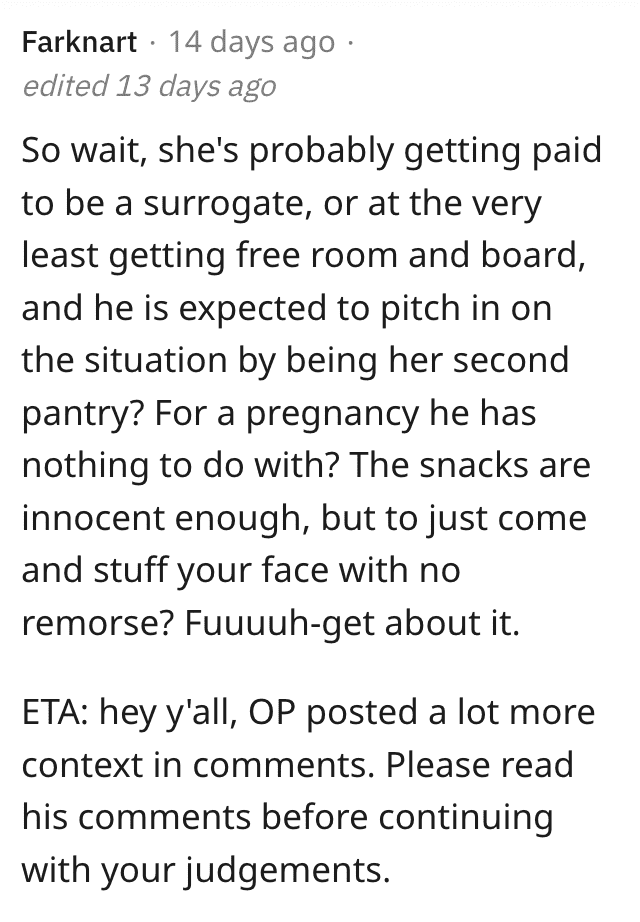 For others, her calling his mother tipped the scales in his favor. 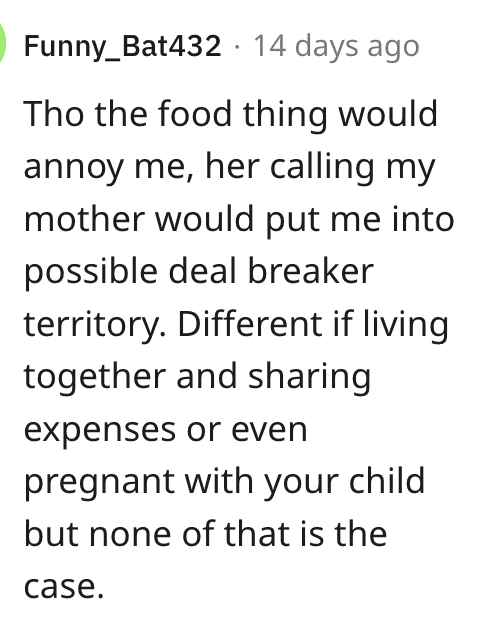 It could have just been a hormonal day, or it could be something more serious. 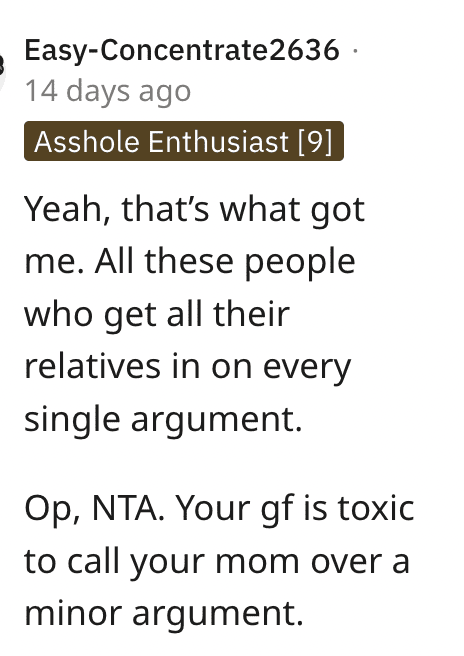 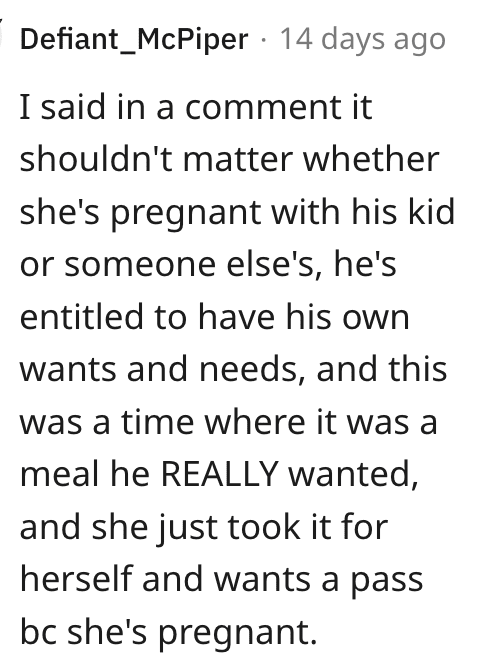 I feel badly for this guy, who clearly thought he was being reasonable and then had to rethink things after his mother got after him. Ouch.

Would you have said something or just let it slide? Tell us which and why in the comments!