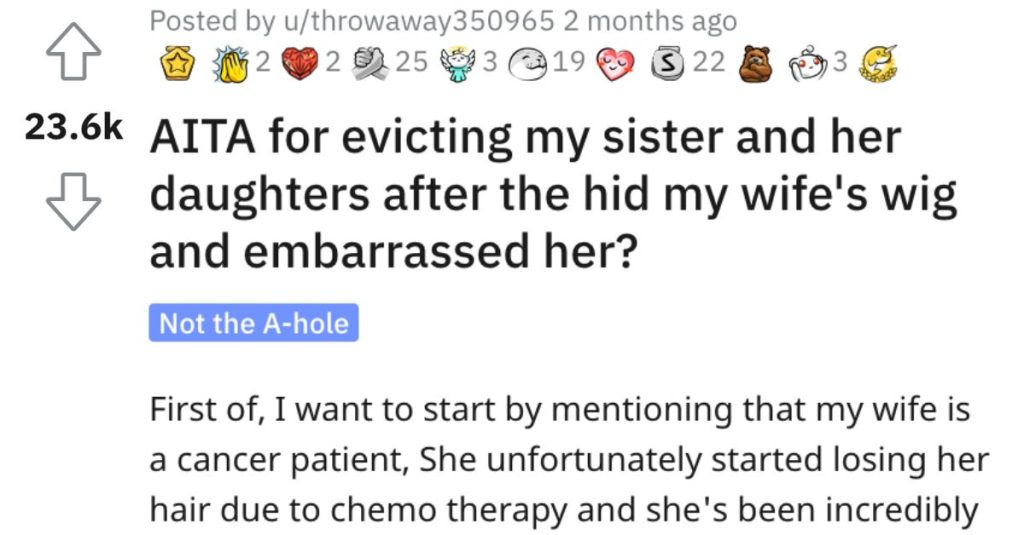 He Evicted Family Members Because They Hid His Wife’s Wig. Did He Go Too Far?

Touch the wig and you will pay!

Hey, you shouldn’t mess with another person’s belongings in the first place, but this?

This is not cool.

But this guy is still having second thoughts about the actions he took.

AITA for evicting my sister and her daughters after the hid my wife’s wig and embarrassed her?

“First of, I want to start by mentioning that my wife is a cancer patient, She unfortunately started losing her hair due to chemotherapy and she’s been incredibly insecure about it, her lack of hair in particular. She got a wig and started wearing it, I don’t mind it, I 100% support her since she only wears it around family and friends.

My sister lost her apartment after a messy divorce and moved in with her twin daughters (16) almost a month ago. Things been going well except my nieces constant remarks about my wife’s wig. They got so hung up on it and kept asking lots of questions about it.

They asked to take turns to try it on, suggested they “straighten” it with the straightener and so on which was exhausting. They even pressured to see her without it but my wife was uncomfortable and refused.

Yesterday I got home and found that my wife was locking herself in the bedroom and crying. I asked what happened, She told me she woke up and didn’t find her wig, then discovered my nieces took it and hid then urged her to come out so they could see her without it. My wife repeatedly asked them to give it back but they started laughing and recording , my wife got had to lock the door to keep a distance cause they didn’t stop.

I was fuming I went into the kitchen and confronted them, they acted confused but I was able to get the wig back. I lashed out telling them they humiliated my wife and harassed her by taking away her wig. They said it was just lighthearted prank which made me go off on them. My sister got involved and said my wife was just being too sensitive and the girls were just curious to see her without a wig but she overreacted. I told her her daughters were recording her!

She saw nothing wrong in it and said I overreacted as well. I lost it on her too and told her she and my nieces are no longer welcome to stay at my home and they needed to leave. I later let them know about the eviction since they thought I wasn’t serious and they started crying begging that I let it go.

But my wife is no longer comfortable around them after what they did. My sister called our elderly dad and he begged that I let them stay and insisted my nieces were just acting like typical teenagers. He offered to speak to my wife but I declined.

They’ve been begging that I change my mind but I ket refusing.

One reader said they were actively trying to humiliate his wife. 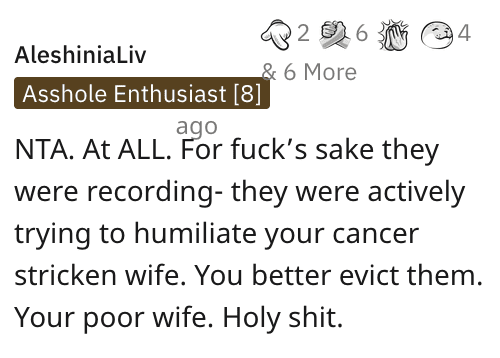 And this person said this guy is NTA at all. 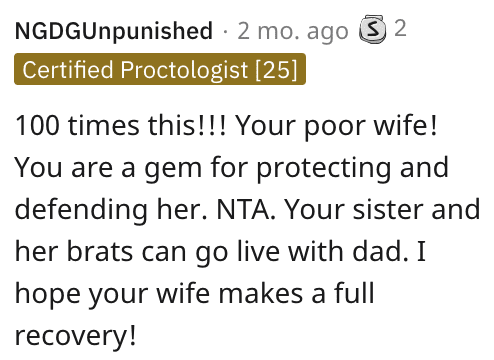 This Reddit user made some very good points about what happened here. 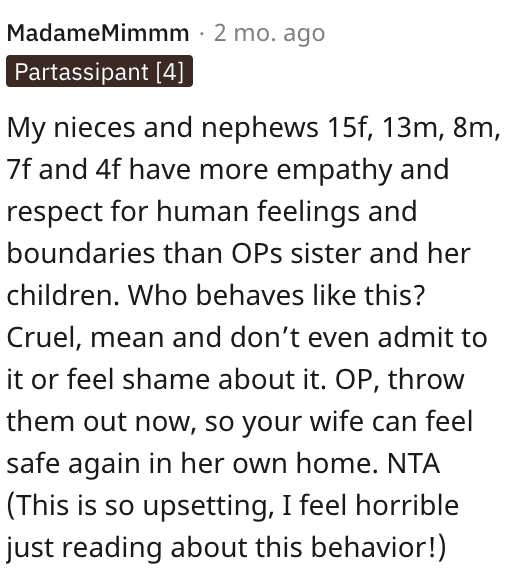