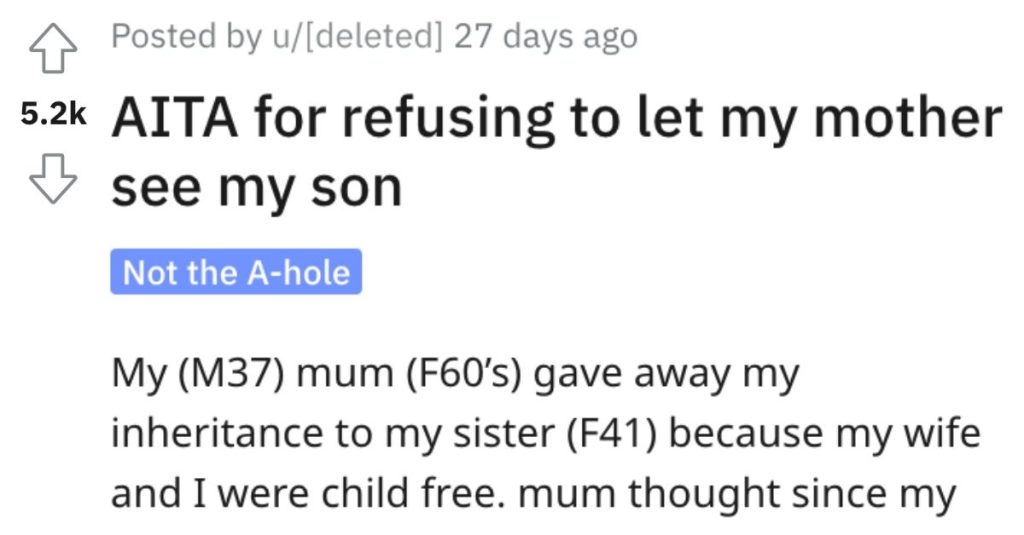 He Refuses to Let His Mom See His Son. Is He Wrong?

Problems build up over the years, resentments simmer, and people take stands…

Read this story from Reddit’s “Am I the A**hole?” page and let us know if you think this man is wrong for not letting his mother see his son.

AITA for refusing to let my mother see my son?

“My (M37) mum (F 60’s) gave away my inheritance to my sister (F41) because my wife and I were child free. mum thought since my sister has 2 children (around 10) she deserves to inherit.

The fortune is originally my father’s who passed away 10 years ago. When mum made that decision I felt like I wasn’t loved or respected for my decisions so I started go LC with my family and later NC. I haven’t seen mum or sis in 3 years.

My wife (F39) got pregnant and we found out once she was almost 5 months pregnant. Now we have a baby boy. Mum has been terrorizing me to see my son but I refuse since I don’t want her in my life anymore.

Now she’s talking about changing the will to include my son. IDGAF. I don’t want her in my life anymore because what she did was insulting but everyone else thinks I’m the AH because I’m depriving her of her grandson and I’m depriving my son of his inheritance

One individual said he’s not the a**hole and that it seems like she doesn’t value him as a person.

And this reader agreed and said there’s one caveat to this story.

And this individual also said he’s NTA and that she never tried to contact him until he had kids. 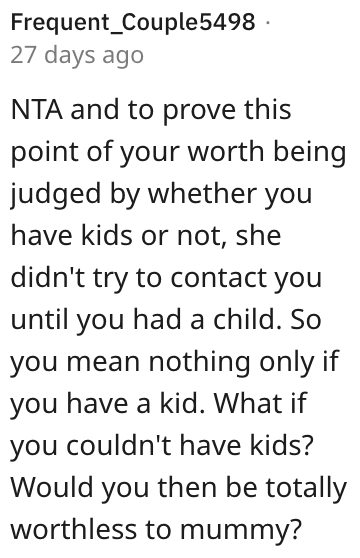