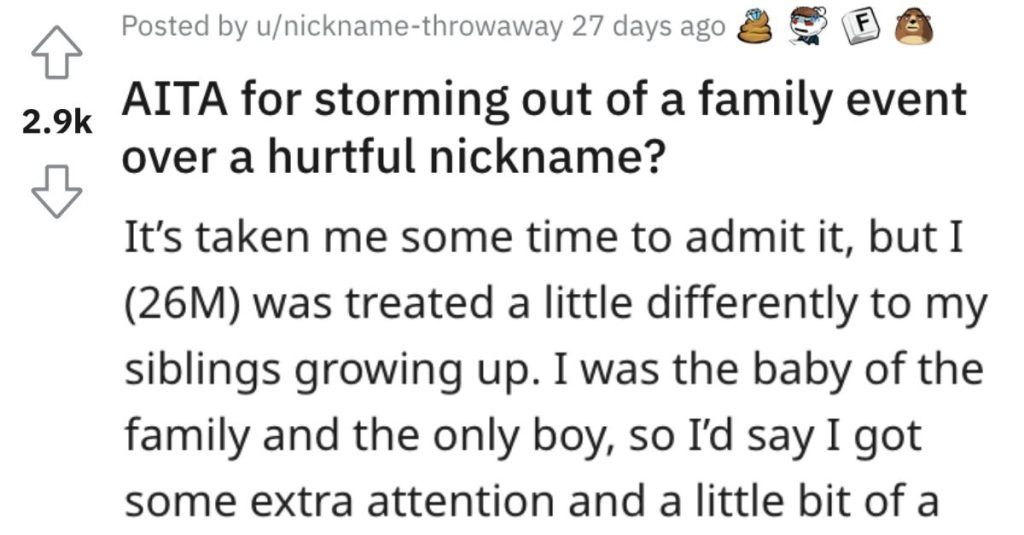 He Stormed Out of a Family Event Over a Hurtful Nickname. Was He Wrong?

Why can’t people at family gatherings just be cool, respectful, and polite?

That would be nice, wouldn’t it?

But we all know that family dynamics are complicated and when people who are related get together, things can get ugly…

Check out this story and see if you think this guy was out of line for how he reacted to a hurtful nickname.

AITA for storming out of a family event over a hurtful nickname?

“It’s taken me some time to admit it, but I (26M) was treated a little differently to my siblings growing up.

I was the baby of the family and the only boy, so I’d say I got some extra attention and a little bit of a softer parenting style than my older sisters (29 and 30F). The way they tell it, I was like some kind of revered god. I personally think that’s an extreme exaggeration and going WAY too far.

This caused some contention between us, especially during our teen years. They always felt like I was getting more than they got at my age, while I always felt a little like they were trying to undermine me. For example, I started piano lessons at 13 and have been practicing ever since.

When I first asked for this and my parents said yes, my sisters reaction was to protest and point out the times they weren’t awarded the same luxuries. They felt slighted, but I also did because it felt like they were trying to take opportunities from me.

I thought we had since moved on from all this. We didn’t talk for a period of time in our late teens/early 20s, but we’ve all since made up and we’re well into our respective adulthoods now.

My parents hosted a family brunch earlier today. During this, my husband was detailing to everyone about how our dream home build is coming along and how specific I am with our requests towards the architect and contractors. He, playfully and lovingly, called me a spoiled brat.

I watched my sisters share a look that wasn’t so playful and loving. When I called them out on it, they said it was still a fitting nickname. This was something they had called me plenty of times over the years, just without any of the teasing affection it holds when coming from my husband.

I basically stormed out of my parents home after that, and I honestly can’t believe I’m feuding with my siblings at this point in my life.

Let’s see what Reddit users had to say about this. 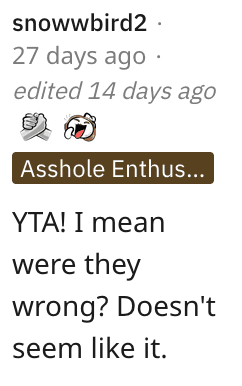 Another individual agreed and said he could have handled this differently.

And this Reddit user said he’s an a**hole and that they don’t know why he got so angry over what happened.