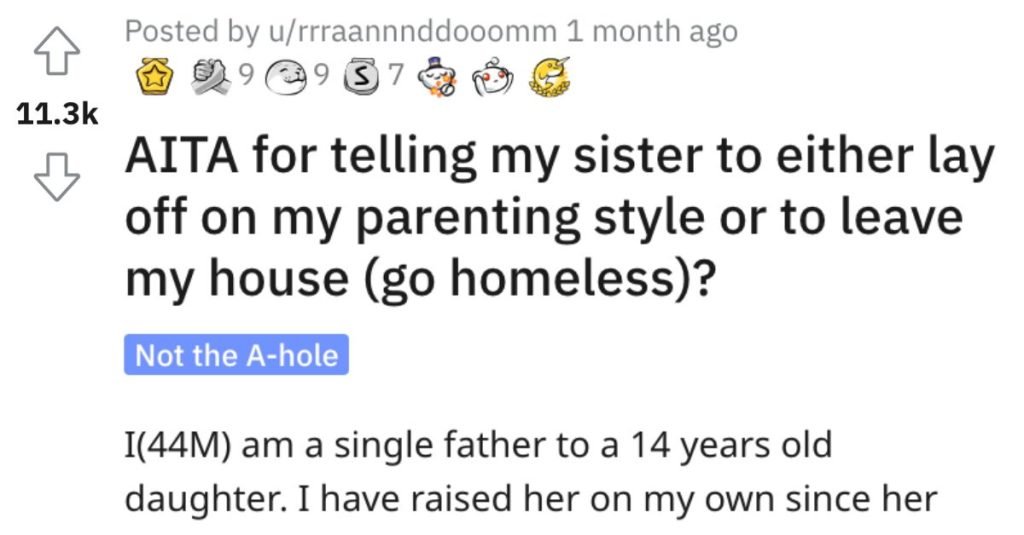 He Told His Sister to Lay Off His Parenting Style or She Can Leave His House. Was He Wrong?

Lay off or leave!

Is that an ultimatum, or what?

You better believe it is!

And the guy who said this to his sister wants to know if he acted like an a**hole…check out his story and see what you think about this situation.

AITA for telling my sister to either lay off on my parenting style or to leave my house (go homeless)?

“I (44M) am a single father to a 14 years old daughter. I have raised her on my own since her mother passed away 10 years ago.

Since the beginning, I was not a fan of being a strict father. I came from a household like that, and all it did was giving me a miserable childhood and a strained relationship with my parents. And a ton of therapy.

2 weeks ago, my sister’s house got flooded, they found out that the foundation rotted. I offered them to move in to my finished basement with separate entrance (house built on a hill). So right now her husband, her three sons (16, 13 and 9) and her are living in my 3 bedroom basement (it has a full bathroom and kitchen/living room).

Usually they have their life and we have ours, but we hang out for a couple hours every day. And that’s when the trouble started.

Like I said I don’t have too many rules for my daughter. As long as I know where she is and she is back by 9PM, she is free to go wherever she wants (within limits of course), I do not control what she wears or what makeup she puts on as long as she follows her school dress code (and of course she dresses appropriately for special occasions), she does not have a bedtime.

I do not check if she did her homework, she has a lock on her door and I always ask permission before going in, if she does not like what I plan to make for a meal she is free to cook something else/order takeout (as long as she informs me before I start cooking, and no ordering in more than twice a week, also she uses her money to order in).

Now these rules are a result of me having a good kid, her earning my trust, and me wanting her to grow up as independent as possible while learning to self regulate and keeping her safety in mind.

My sister on the other hand is very strict: she has her kids on a set routine, they are not allowed to have closed doors except while changing, she checks their electronics all the time, they are rarely allowed to go anywhere, they eat what she cooked or they starve (if she allows them not to eat what she made that is), she is so on top of their schooling that I feel bad for the teachers (she always emailing them or calling them or even going to school), they do not get pocket money and are not allowed to work, and even the 16 years old has a 9PM bedtime school nights/10PM weekends.

I don’t agree with her parenting style, but I keep my opinions to myself. But now she is demanding that I give my daughter more rules, because her kids are comparing themselves to their cousin, and they are rebelling.

So I told her straight to her face, she either keeps her opinion to herself and parent her kids and leave my daughter to me, or she is free to find somewhere else to live.

She says I’m an AH because I don’t know how my lax parenting is only adding more stress to her already stressful life, and threatening her with homelessness is a very low blow.

This person said he’s NTA and that his relationship with his daughter is working just fine. 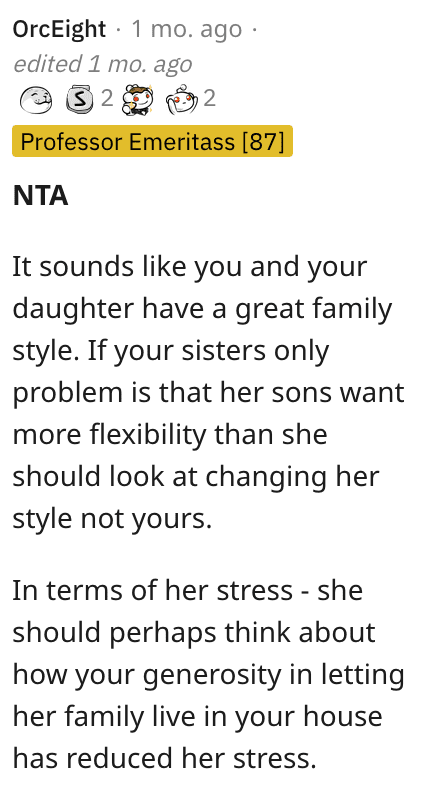 Another individual agreed and said his parenting style sounds great and he’s NTA.

And this Reddit user said it sounds like his sister will have a strained relationship with her kids. 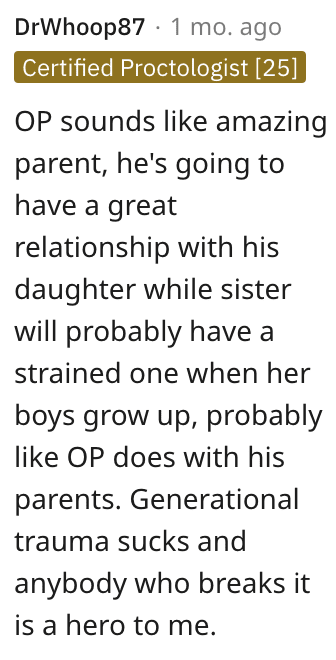