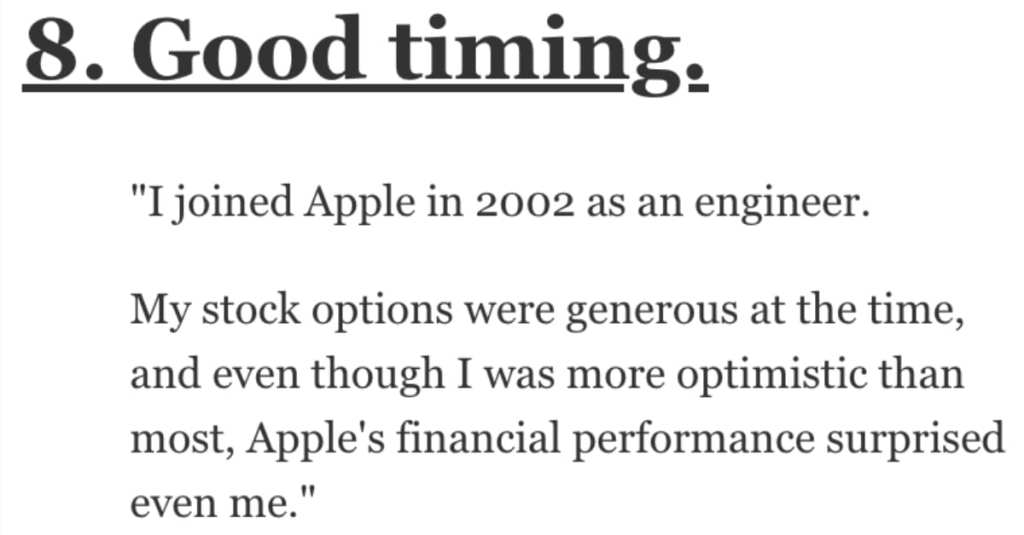 If You Make Over $150k/Year, What Do You Do and How Did You Get There? People Responded.

But, everyone is on their own path, so it’s important not to compare yourself too much to other people when it comes to money.

But still, I do wonder what these folks do and what their path was…

I started as a physicist then decided I wanted to go camping more.”

Took an 8 month course for 5k and bought some tools.

Had no interest in it before but it turned out to have a great community and challenging, interesting work with a TON of variety.”

Average hours of work per week during residency was around 70.

I had just gotten fired from a retail job for f**king around, and had been out of work for a couple months.

Sent out 127 resumes. No callbacks.

Watching a TV show and the character names a company he’s working for, and I think to myself… theres one of those in Nashville…so I sent a resume.

Only place that called me back for an interview. Started in entry level position, and did well. Moved and promoted multiple times.”

Requires a GED and you have to be able to show up on time, sober, and ready to work whenever they call you.”

I take care of the technical requirements to go live from anywhere in the world- anywhere from a city street to a remote national park to underwater.

I started at an entry level manual labor job on a TV show through a family connection- as is very common in this industry.

I did occasional freelance work for about 5 years before I got offered a full time engineering position.

My advice for anyone coming into film/TV is pretty standard- learn everything you can even if it’s not your job, say yes first then figure it out later, and always have a positive, can-do attitude.

It’s also not for everyone- long hours, frequently outside rain or shine, terrible work-life balance.”

“Went back to college for accounting at 27. Took a full time class load while working full time.

The first public accounting job out of school (graduated at 33) was a $20k pay cut for me and required working at least 70 hours a week for a good part of the year.

After two years, I got my CPA license and one of my previous professors called me up and hired me as the International Accounting Manager for a software company but I had to relocate, which I did.

I worked there for two years and took the Controller position at an Aerospace Manufacturer.

I now am right at $150k and hit that mark five and a half years out of school.

Basically, worked my a** off, was willing to relocate, but also entered my current industry with ten years of management experience in the construction industry, which really helped to move quickly.”

My stock options were generous at the time, and even though I was more optimistic than most, Apple’s financial performance surprised even me.”

Trained for two years and then went out on my own.

Do commercial jobs only.”

Worked a ton. Emphasized making everyone else’s job easier. First one to volunteer to eat “the black jelly beans”.

“My husband makes $280k/year as a VP of Design for an apparel company and I make $130k/year as a marketing director for an e-comm business.

Husband dropped out of trade school to start his own clothing brand, hustled, built a reputation as being loyal and kind to work with/for and from there, job offers started coming in.

I took the more traditional route: got my MBA and worked my way up to where I am now.

Moral of the story: it helps when people really like to work for you and with you.”

What do you do and how did you get there?