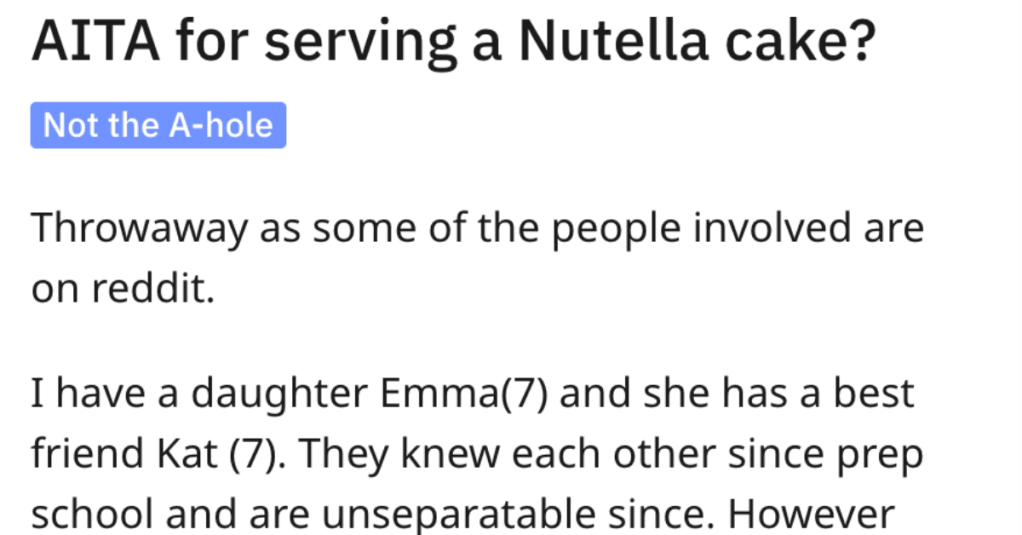 If You Throw A Party, Are You Personally Responsible For Everyone Else’s Allergies?

In recent years, food allergies among kids have become a bigger issue for everyone who has children, whether they have allergies or not. We have to watch what we pack in our kid’s lunches, we have to be considerate when we’re bringing snacks to sporting events, the whole nine yards.

This woman’s daughter and her daughter’s best friend both have severe food allergies – OP’s daughter to strawberries, and the friend to nuts – so they’ve been navigating those issues together since preschool.

Throwaway as some of the people involved are on reddit.

I have a daughter Emma(7) and she has a best friend Kat (7). They knew each other since prep school and are inseparable since.

However they are not allowed to stay overnight at each other places as Emma is allergic to strawberries which Kat loves, and Kat is allergic to nuts, while Emma loves hazelnut and Nutella specifically.

When OP and her daughter arrived to the friend’s birthday party, however, there was nothing there that was strawberry free (despite OP having checked ahead of time that there would be.

They gave the friend her gift and made excuses to leave, blaming an illness and not the overwhelming amount of strawberries.

4 months ago Emma received an invitation from Kat to her birthday party, which has been accepted.

I have asked Kat’s mother before if I need to bring something for Emma, but she assured me everything is fine.

When we arrived the entire part was strawberry themed and all the food (they only served sweet stuff) had strawberries in them.

Due to this Emma gave the present she made to Kat and we left shortly after as I don’t want to expose my child to allergies.

Kat was told that Emma wasn’t feeling well and we didn’t want to risk if its covid.

When OP’s daughter’s birthday rolled around she requested a Nutella cake, which of course contains nuts. OP warned the friend’s mother that the cake contained nuts, but that the cupcakes and other options available were nut-free.

During the party, OP’s daughter’s friend’s mother “forgot” that Nutella contains nuts and gave her daughter a slice, resulting in a trip to the emergency room.

Yesterday was Emma’s birthday. She wanted a Nutella cake so one was ordered. I have warned Kat’s mum that the cake will contain Nutella but cupcakes and other deserts are nut free.

She knew about that and everything went fine until Kat had to be rushed to the hospital due to allergic reaction.

Kats mum forgot that Nutella contains nuts and let Kat to have a slice while me and my husband were not watching.

Now, the friend’s mother is accusing OP of doing it on purpose to “get back at her” for the strawberry fiasco and OP is wondering whether or not she should have told her daughter no Nutella cake for the occasion.

She called me an a$$hole as she felt I was getting back at her for throwing a strawberry party and now her child is hurt.

She also said it in front of Emma so she is now feeling guilty and refuses to eat anything.

Aita for ordering a Nutella cake for my daughters birthday?

Does Reddit think OP should have been the bigger person? Or was it the friend’s mother’s responsibility to keep her own daughter safe at the party?

Let’s find out below!

The top comment really nails all of the issues with the friend’s mother’s behavior. 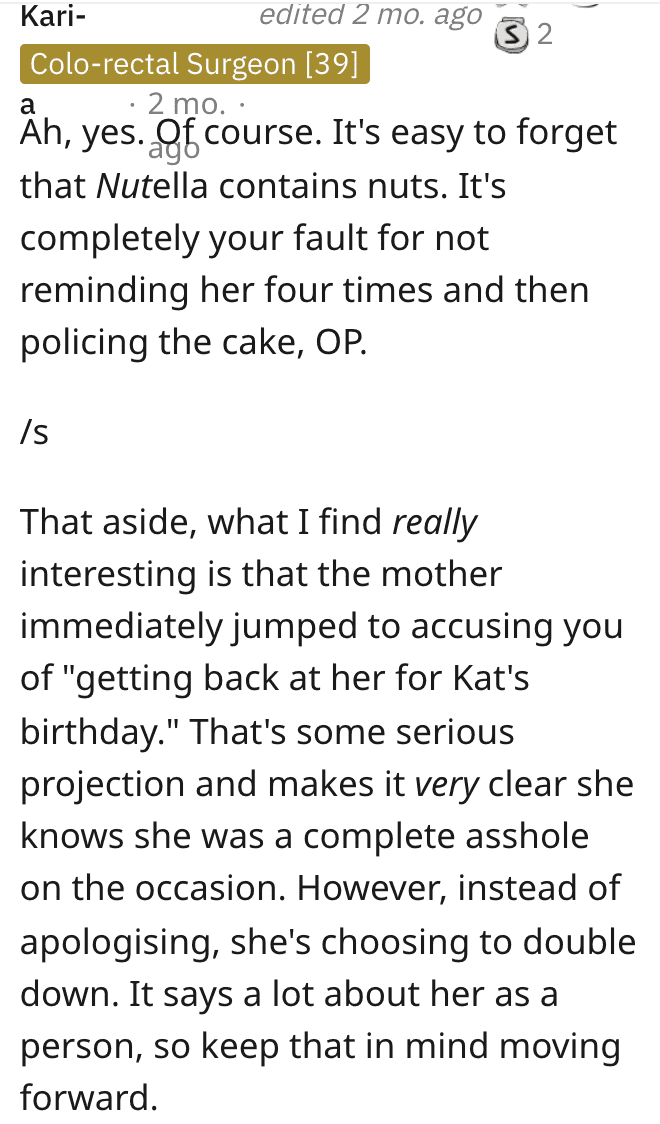 There were nut-free options at the party. It’s not her fault if the friend’s mother chose not to utilize them. 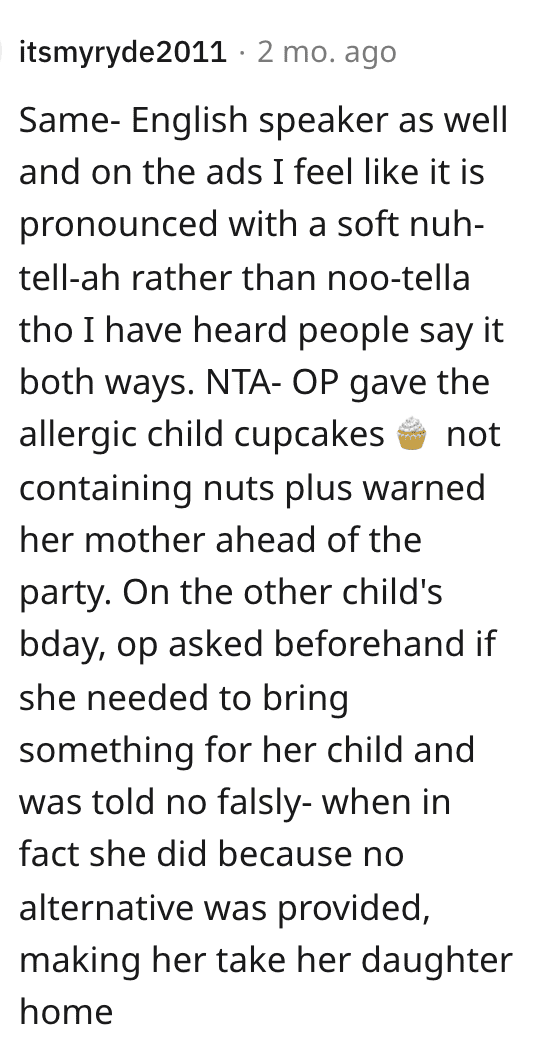 Surely she wouldn’t put her own child’s life in danger just to bring the drama, right? 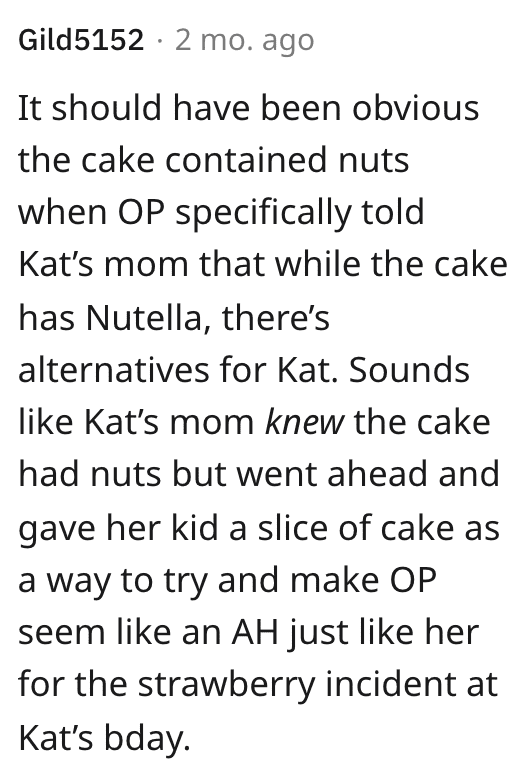 Either way, it’s not OP’s responsibility beyond warning people that there are nuts in one of the desserts. 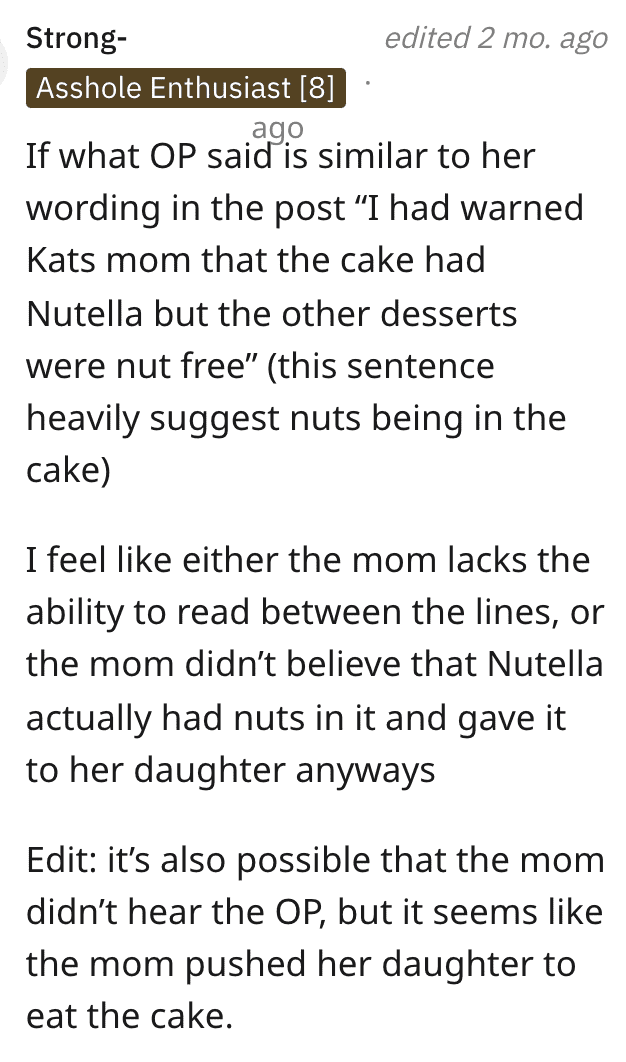 The other mom has been doing this for seven years and should definitely know better. 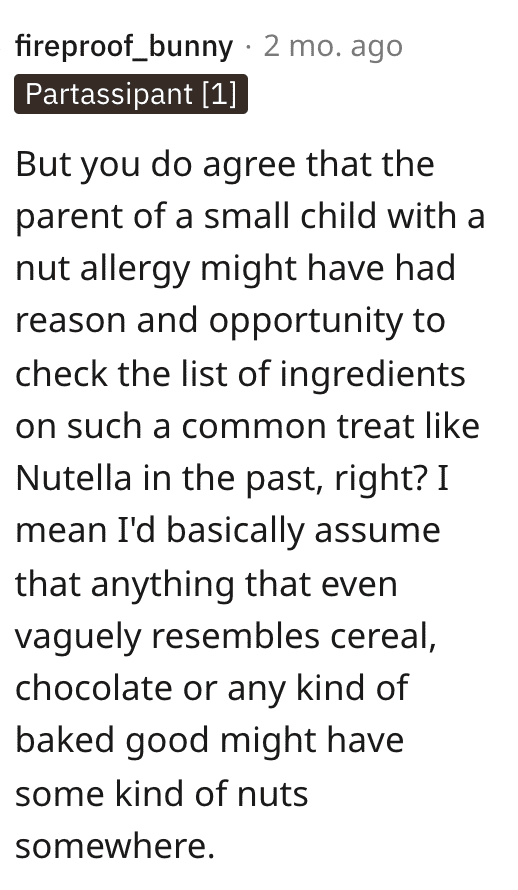 As a person with a severe peanut allergy, I can tell you that I would never blame someone else for an accidental peanut unless they specifically told me something was ok to eat when it wasn’t – and the opposite was true here.

Do you think OP should have just forgone the Nutella cake? Tell us why or why not in the comments!