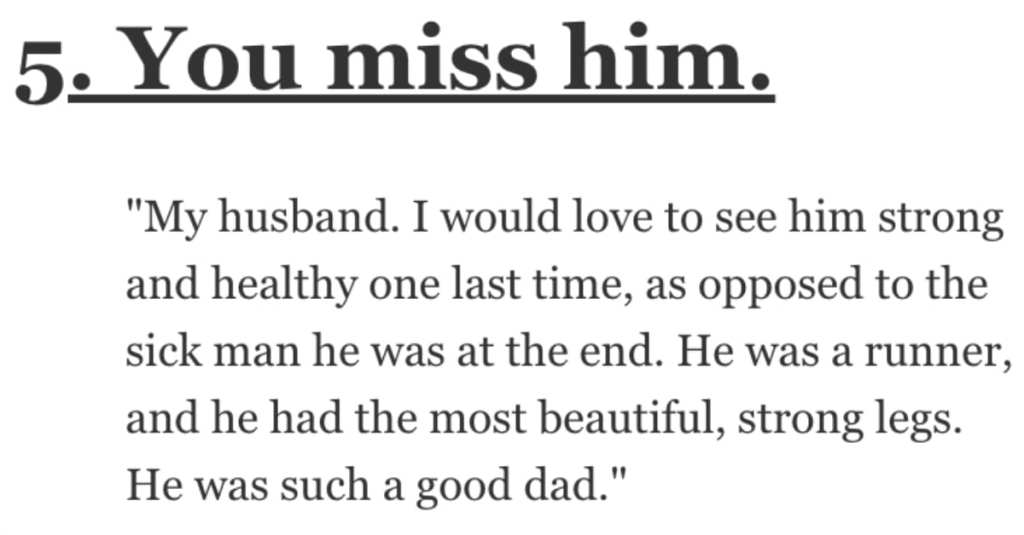 If You Were in a Room With Everyone You Ever Met, Who Would Be the One You’d Look For? Here’s What People Said.

Well, this promises to be an interesting conversation!

If you were in a room with everyone you ever met in your life, who would you look for first?

I think I’d have to say someone in my immediate family. My dad. Or my mom. Or my brother. Or my old dog…

She d**d from cancer when we were 12, it was so hard watching her go.

I named my first born after her, and am best friends with her little sister now. I miss her.”

“I met a man on a plane once, sat next to me. He was about my dads age and later I found I was about his daughters age.

We started chatting, and just a few days before I had just cut off contact with my veteran al**holic father. He asked me about myself and I told him I worked in child welfare. He then told me he was a veteran addictions therapist. I don’t even remember how we got on the topic but by the end of the flight he was telling me “tell your dad you love him. Tell him you want him to get sober for you, because you want to see him live a happy and full life.”

It was such a bizarre encounter with what was going on in my life at the time and I’m not religious but maybe divine intervention placed us in that place at that time? I’d look for him to tell him how much that conversation meant to me, that it was the most impactful meeting with a stranger I’ve ever had.”

He battled with Leukemia from 13 to 17. The last year of his life he was constantly in and out of the hospital and was immunocompromised. I got to see him but we had to keep our distance. We were planning on going to the same college for engineering.

I know all he would want to know is if I did it and kept moving. I plan on naming my first born after him. 12 years later and I still think about him most days and he is my driving force to stay positive and keep on pushing.”

I’m 21 now, finally attending University to do a degree in computer science (which is what he did too, and I bet he never would have thought I would follow in his path!) I’m in a loving relationship with someone who is so smart and interesting that I wish my dad – another loving and interesting human – could meet.

So many memories and events I wish he could be there to see.

I would love to see him strong and healthy one last time, as opposed to the sick man he was at the end.

He was a runner, and he had the most beautiful, strong legs.

He was such a good dad.”

“My AP Calculus teacher, he was the only person in the entire school who noticed I was being ab**ed at home.

He approached me cautiously, never judged or blamed me. He treated me with respect at a time where no other person did, it broke my heart when he d**d a few months later.

I never took the AP Calculus test because I was devastated (he was my teachers years before that so I always looked up to him).”

7. Someone from the past.

“Hailey. I met her when I was 14 at this church thing.

She had had a rough go at life, but was very kind to me. We spent most of it talking on a little boat on the lake / pond. I got her number so we could hang out. I called and her mom cussed me out.

I tried to clear things up with her at church on Sunday, telling her that I wasn’t the one turning her daughter to drugs. They weren’t at church and I never saw her again.

I miss you Hailey, you were very kind and I wished we couldve been better friends.”

“My prom date. I thought we were going as friends.

I was too young and stupid to realize how much she liked me and put herself out there, just to have me not notice.

Owe her an apology for that.”

“A friend I had while in the Army.

I never new he was sick until he d**d. It’s one of those life events I’ve never been able to “get over” for lack of a better term.”

“Lost my grandmother two months ago. It’s been shi**y.

If I could talk to her one more time, I wouldn’t be saying anything she didn’t already know, but I’d still say it.

I guess I just wish I could’ve said goodbye. The only ones who got that chance were my grandfather and mother.”

“That girl who asked for my number, but never called me.

It seemed like fate. I had been mourning the loss of a love one for years at this point, and my feelings basically stopped existing. But then I heard a song in a tv show that made me bawl my eyes out. I decided to embrace the sad feeling, downloaded the song, and went for a walk listening to it on repeat.

On my way back home I was waiting for a light to change green, when a jogger pulled up next to me. The light turned green, and she continued jogging. But when she got across the street, she stopped and waited for me. She motioned for me to take my headphones off, then asked me if I was listening to Agnes Obel.

I said yes, and told her about how I had been emotionally d**d for years until I heard that song. She told me she had the same experience, and first heard the song in the same show that I did!

We chatted for about 15 minutes until we were going separate ways, but not before she asked me for my number. But no happy ending here, it’s been at least 7 years and I’ve since changed my number.”

What would your answer to this question be?