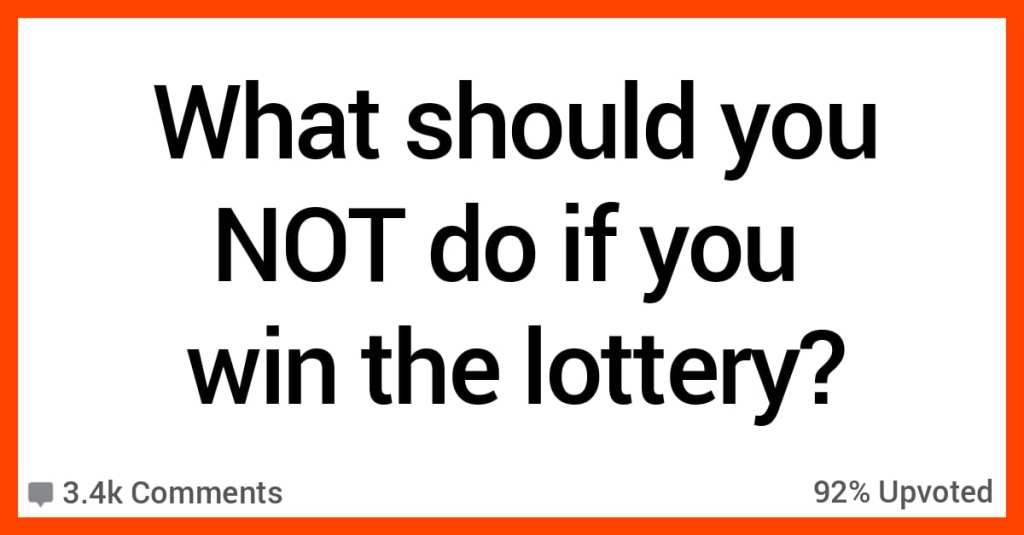 There are plenty of posts out there that give advice on what to do if you win it big in the lottery, but what should you definitely not do if you walk away with big bucks?

Well, the internet has some ideas, so listen up!

And yeah, some of these ideas are better than others. Like this first one… which is stupid.

“Go to a casino and blow all the money away.”

“Do not go public with it and have an attorney set up something for your winnings where people won’t know about it.

You’ll have people coming out of the woodwork for a handout otherwise.”

“Do not fill a swimming pool with gold coins and gems and try to swim around in it Scrooge McDuck style.

Best case, you’re just going to roll around on a big pile of coins.

Worst case involves a diving board and broken skeleton.”

“Do not tell anyone, except a lawyer and a CPA. Hell, I wouldn’t even tell the lawyer and the CPA that you won the lotto at first. Just tell them that you’re coming into a lot of money and need some help getting it situated properly.

DO get your lawyer and your accountant to setup a trust and all the necessary accounts so that you can claim the money anonymously, and live comfortably off the interest for the rest of your life.

DO take up a hobby. You never have to work another day in your life, so pick something that sounds fun. Maybe whittling, or pie making. Whatever makes you happy.”

“Thought I’d add a different answer here to the usual ones. Do NOT forget the upkeep cost. The biggest reason why lottery winners end up broke again is they forget about the running cost of their purchases.

The larger the house, at least in the UK, the bigger the council tax you have to pay which can get quite large for large houses. People just think that “ooo buy a big house and rent is free forever” forgetting that yearly charge of thousands for that very large house which adds up to maybe 20-40k alone in a decade or two.

Cars are more obvious, you get an expensive and fancy car. For starters you’ve just lost thousands as you’ve added a new owner. Then you have to tax it and that’s more than normal now. Then you have to insure it and oooo guess what that fancy sports car you just got, that’s a lot of insurance. Then spare parts are far more expensive as it’s a rarer model than a regular car. It gets no miles to the gallon so you’re always filling it up. Once again yes you brought it but you’re now paying probably thousands per year in upkeep.

So congrats, you spent all the money and thought you set yourself up for life right? Apart from the fact that those two things alone may well end up costing you maybe 30-60k over the next 10-20 years and you already spent everything so you sell the house and car (at considerable loss) and buy a smaller house and car….

BUT they need upkeep as well.

So you sell them and downsize again…

and again…and you’re working 9-5 to keep your 1 bedroom flat just about ticking over well past retirement because you didn’t work for 10-20 years so you have almost zero retirement funds earn’t so you have to work until death.”

“My uncle won $9m from the lottery. He bought a large piece of land in Amish country, built a mansion on it, bought a bunch of toys (boats, atv’s, etc.), and adopted a kid. A bunch of my s**tbag extended family moved to where he lived in Maine and began asking him for money.

2 years later he ran out of money, divorced his spouse, and pawned the kid off to my mother who, out of love and pity, raised him.

So don’t do any of that i guess!

“Spend it all on lottery tickets to try and win more.”

If you want to open a trust you need to make the trust and then have the trust sign it, this can then protect your identity because most states require you to publish your name.”

“I would have no problem not telling anyone, I’m a private person as is and I’m not someone who likes to have attention. Keeping my spouse reigned in is a whole other story, she would have an incredibly difficult time keeping quiet.

I would go out of my way to not tell anyone for a long time, possibly even years if I was able to pull it off, but realistically I don’t think that’s possible with a large jackpot. You’re going to make major life changes, even if you are someone who isn’t flashy, it’s going to be hard to not raise suspicion.

With a jackpot as large as the current one is, it will not be possible to keep your life as it is, that is a level of money that will require you to relocate in a major way, likely multiple times over the next few years. I actually feel like that type of money could possibly require you to change personal details about yourself, I just don’t think you could escape the constant outside pressure otherwise. You would also have to be prepared to permanently destroy multiple relationships in your life, money brings out the worst in people, family you were close with, friends, and former co-workers are going to look at you differently. There’s going to be jealousy, resentment and anger directed towards you.

I almost feel like you would have to essentially start your life over.”

“Buy new cars all the time.

I live in a rural city in Canada.

Maybe 6-8 years ago a local woman won $12 million in the Lotto 649. She went from your regular car to $80,000 Mercedes- Benz’s and Jeep Grand Cherokee Summit’s every year for her, her husband and her son.

Fast forward to last year. I’m the GM of a Car Rental agency. Her kid is 19 and thus unable to rent or even drive a rental car. They keep demanding I allow him to drive, I keep telling them no he can’t going so far as to show them how the computer system with automatically blank out his license.

They flip their shit all entitled and what not. Typical ‘Can I speak to your manager?!” haircut and all.

I find out later than the $12 million is gone. All of it. Disappeared. I found out through contacts at several dealers that they had purchased almost 20 vehicles in 6-8 years, getting hosed on the trade in value almost every time. The vehicles didn’t account for all $12 million, but it certainly accounted of a large portion of it.”

“Let people guilt trip you into giving them money.

Everyone has a sad story that’ll break your heart and make you feel bad.

As sad as it is, don’t trust it…ever.

Money makes people greedy. Greedy people do whatever they want to get what they think they need.”

“Have a pretty horrifying family story that exemplifies exactly why you should NOT do this.

My father was never really the “work hard” kind of guy. If someone could give it to him or make it easier, he was all for it. Growing up, I remember mom fighting for us to get something new occasionally, but he’d almost always yell and complain about the cost while also not willing to work much. I now know there were some complicating and difficult things he experienced when he was younger that likely partly contributed to this, but hindsight and all that.

He also was abusive to me, my siblings and our mom. After a rough divorce and all us kids left the house, he became more and more of a hermit. He started playing the lottery, and whenever we’d see him he’d talk about it all the time. He also became a hoarder at home and nothing anyone could do or say would convince him to let us help, even a little. Two of my siblings showed up at his place unannounced and he came out of the house with a shotgun. So, we ended up not visiting him at our old house – we’d meet at a gas station where we learned he’d been at all night, buying lottery tickets by the handful.

He won – big several times, at least big to him – not millions I don’t think but a lot. H€ll we don’t even know how much he won. He’d tell us he won “something” every once in a while, had to talk to the lottery commission or whomever they were. But he became obsessed with winning more…and more and more. Bought thousands of tickets, literally. For years. He asked all of us siblings for money for this towards the end, and by now we realized at least a part of his addiction. But he refused help and got incredibly mean and agitated whenever we’d bring it up. We felt guilty and knew he needed help but didn’t know what to do honestly.

So, when we hadn’t heard from him for a while after trying to check in, we called the authorities and asked them to do a wellness check. He’d been dead a while, and they had to have a team of people try to remove him, with a few saying it was the worst situation of that kind they’d seen. When we all met up to try and deal with things, we cleaned out the car he was leasing and filled 4 hefty yard waste garbage bags full of tickets out of his car alone. The house and barn were worse. We don’t know final tallies, but we know he lost way more than he ever won.

We do have some good memories – we know he tried at times, and we know we weren’t the easiest kids to deal with. But once the lottery addiction took hold…I don’t know, he just changed even more for the worse.

Please, please, if you know of anyone close to you who develops a gambling addiction or hoarding, PLEASE do all you can to help. At times I wonder if we really did all we could, and I don’t wish that on anyone.”

“Do NOT buy a M1A2 Abrams tank and use it as your daily commuter vehicle with the thought that it would prevent tailgating and/or people cutting you off on the highway.

Because that’s My idea.”

“Blow the whole 6 million on drugs and then burn your house down to claim the insurance so you can buy more drugs.

Happened where I live about ten years ago. Highly recommend not following that course of action.”

People get killed over that stuff.

Get an attorney get a new phone number and don’t give it to anybody. Also stay off Facebook”

And you know, call me if you win big and are feeling generous.

Okay, actually, don’t call me. Call somebody who actually needs it.