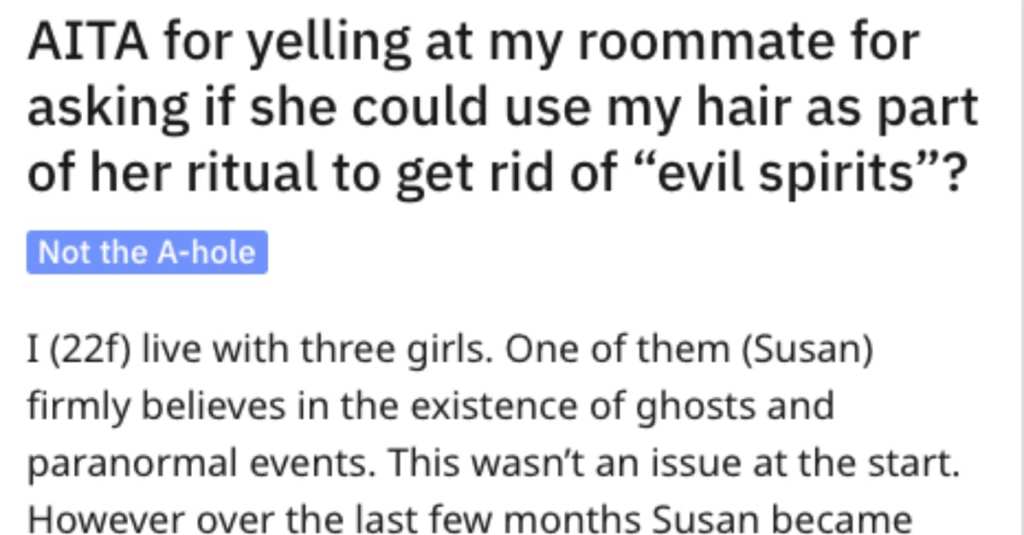 If Your Roommate Needs Some of Your Hair for a Spell, Should You Give It to Them?

Different strokes for different folks, you know? That’s what I say.

At least, that’s what I say most of the time, but when it comes to evil spirits and pieces of my body, I don’t know…maybe that seems like it’s a bit more of my business.

This woman is young and lives with roommates, one of whom never hid her interest in the occult. Which wasn’t an issue for anyone until an evil ghost popped up and demanded an audience.

I (22f) live with three girls. One of them (Susan) firmly believes in the existence of ghosts and paranormal events. This wasn’t an issue at the start. However over the last few months Susan became convinced that an “evil spirit” lives with us.

According to her, this ghost would visit her room at night and just stand in the corner and tell her things.

The roommate was freaked out (understandably so) and freaked out OP by crawling into bed with her in the middle of the night like a frightened child.

Because she was so scared she would constantly leave her room at night and climb into my bed. The first time this happened I freaked out when I woke up. I got mad at her but she started crying and said she felt scared.

OP offered to switch rooms, which is when the roommate dropped the bombshell that the evil spirit was actually attached to OP, not to her at all.

To solve this problem I told her we should swap rooms. She insisted that the spirit was actually attached to me so it would be a waste of time to swap rooms. I (jokingly) asked her if this entity was low key racist (the other girls are white, I’m mixed). She was angry and said that my negativity is inviting more bad spirits.

Things came to a head when the roommate asked for some of OP’s hair in order to try to get the spirit to go away, and OP blew up and suggested her roommate get help for her “delusions.”

Anyway a few days ago she claimed she found my hair in her room (which doesn’t make sense as I have curly brown hair, she found straight blonde hair. She has straight blonde hair.). Apparently this was a sign that she should use my hair to communicate with the spirit. So she literally asked me if I’d be willing to help her out.

I got pissed and told her that she needs to seek professional help instead involving me in her delusions. I also said that she has serious problems she needs to address.

Now the roommate is even more upset and complaining online about what a horrible bully OP is, and our poster, who doesn’t want to be bald or be involved with any sort of spirit, is wondering whether or not she should have just played along.

She had a complete meltdown and cried HARD. She thinks that I’m not taking her seriously, that I think she’s a bad person (racist etc) and that I “hate” her. She told everyone that I’m a bully and even talked about it on her YouTube channel.

Also, if you think it’s relevant, apparently the ghost-seeing roommate has an unrequited crush on OP.

I think that she should seek help. However my other roommates thinks that she just has a crush on me and I need to address that first. They said that I broke Susan’s heart and should be more mature about this situation.

First of all, I think that’s pretty ridiculous and unrealistic and not relevant to the actual problem. It’s frustrating because they keep bringing that up. Secondly, I don’t think any of this is my fault. Somehow I’m the asshole and Susan is the victim.

The commenters are ready to weigh in, y’all – let’s go! 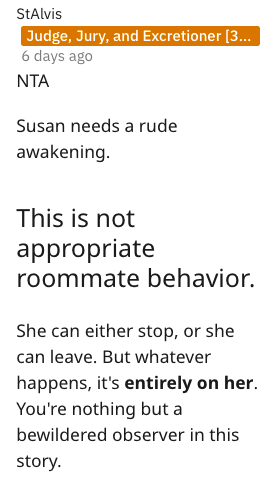 Plenty of folks backed up the idea that the roommate should probably seek professional help. 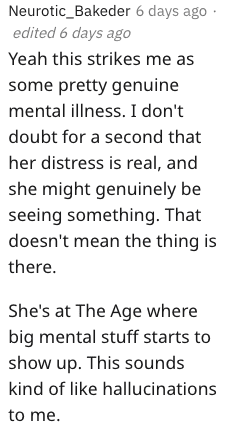 It’s worth a shot, I guess. 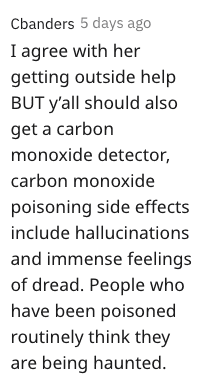 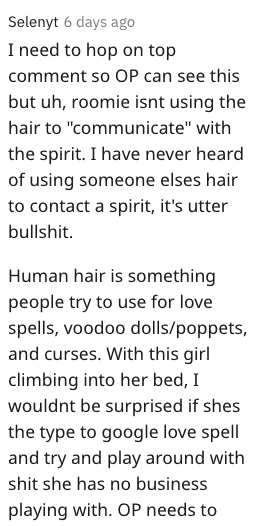 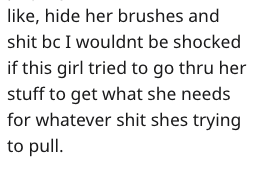 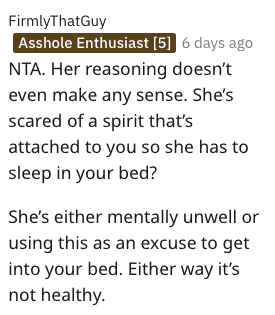 I thought this was going to be a bit of a lark at first, but the more I read through the comments, the more I think OP should probably take this seriously.

What do you think? Should she run? Stand her ground? Drop your opinion in the comments!