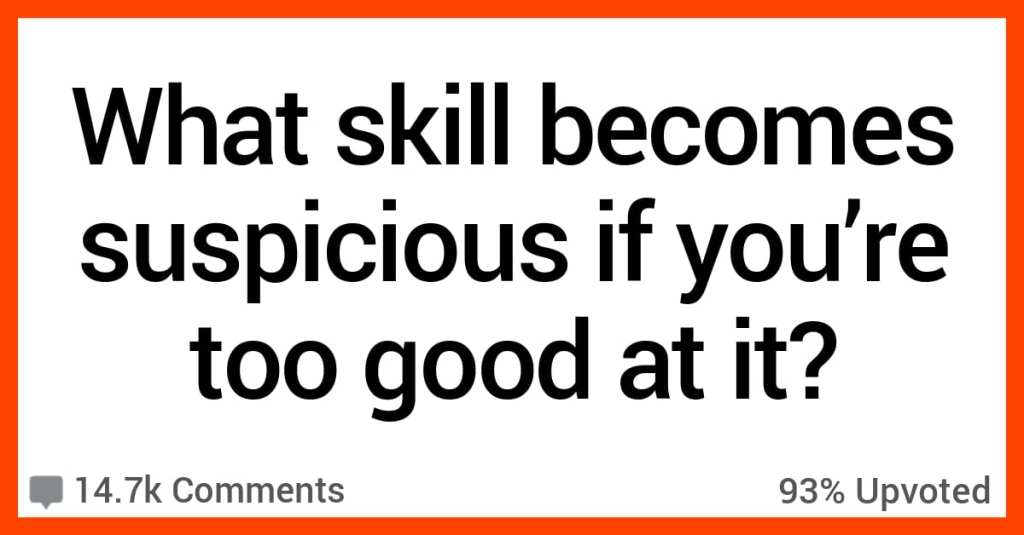 If You’re Too Good at These Everyday Skills, People Will Become Suspicious of You

One of the beautiful things about AskReddit is that sometimes you get blindsided by a question that is so random but is also pretty brilliant.

For example, the question posed to readers in the article you’re about to read is something I’ve never even thought about before…but now I’m excited to see what folks had to say!

AskReddit users talk about the skills that start to look suspicious if you’re too good at them.

I can count a stack of bills quickly.”

“I kid you not, when I was a kid the apartment I lived in could be opened with a butter knife. We’d lock ourselves out and just ask the neighbor for a butter knife and get back in.

Strangely, there was an unspoken code that we would never use one to enter someone elses apartment.”

“Cleaning out stains. I cut my hand pretty badly once and blood got into my white shirt. I tried to clean it myself but the stain never got out.

I told my mom who told me to bring it with me when I came back for Christmas break and she cleaned it.

By the way she didn’t even bleach it. Her ability to clean stains so well has since then been suspicious to me.”

“Anything with a computer.

If you’re good enough, with literally anything to do with computers, people will think you’re able to hack computers.

They’ll also think you’re able to fix any problem with their computers, which is equally detrimental on its own.”

“Being very handy with sharp knives, knowing how to break up a carcass in very little time and with no effort.

I learned a trick in the oilfield that allows me to that without sucking gas, or other fluids, into my mouth.

It’s so simple. Stick a hose into the container then hold your hand against the hose and pull it out and release. Simple vacuum release and you’ve got flow. I do it all the time at work, especially when we change out radiators and have to put the coolant back into the trucks.

I put our coolant pan on the forks of our forklift and lift it up to a reasonable height and then get it flowing.”

I’ve actually learnt to start dragging my feet to deliberately make noise when I get within hearing range of people so I don’t startle them by coming up right behind of them out of nowhere.”

8. What are you growing?

“I once got into hydroponics.

Of course none of my friends thought I was just growing kale and tomatoes.”

“Swiftly tapping my card and passing through the turnstiles to get to the subway.

One time a lady thought I was fare evading because I got through way too soon after she passed through.”

“I have a ridiculous amount of true crime knowledge. Really useful when talking to fellow true crime nerds.

Really weird to reference in the middle of an unrelated conversation, apparently.”

11. Where the bodies are buried.

“Knowing the proper way to dispose of/bury a body, without it being discovered.

Growing up on a ranch, you have animals die. Disposing of the carcass without attracting scavengers and predators to the ranch is a vital skill to have.

I’ve had a few weird looks from people, when watching crime shows where bodies were discovered, and pointing out what they did wrong.

Along with that skill, ranching brings the ability to quickly skin, clean, quarter, and butcher a carcass.

I’ve learned to just be quiet during those shows.”

A few years ago I was at a new job and a coworker locked her keys in her car. I got the door open in under a minute. The security guard watched me and had some concerns with the speed at which I opened that car without damaging it.

Truth of the matter is that the guard wasn’t paying attention completely to what I was doing. My first car was a two door sports car and I learned about a design flaw with those cars when my dumba** locked my keys in the ignition.

She had a similar car and her keys in the ignition, so I took advantage of that design flaw to get her door open without damage to the car.”