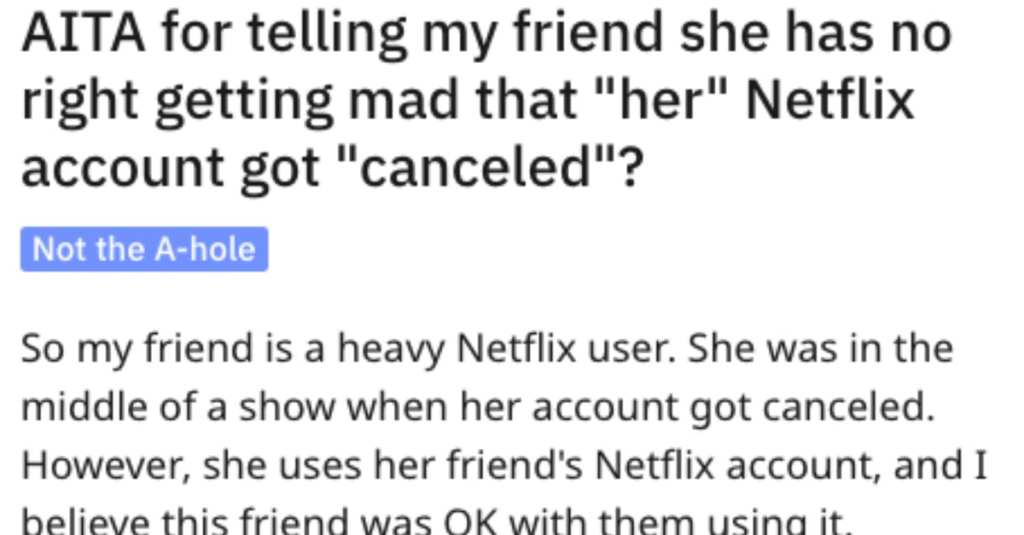 Is It Wrong to Cut Off a Friend’s Netflix Access Without Letting Them Know First?

It’s a brave new world out there, and one of the things families, friends, and people in other sorts of relationships are navigating is how and when to share streaming service login information, and when and how to cut that off if there’s a falling out between parties.

This poster is the friend of someone who was using someone else’s Netflix account when it suddenly wouldn’t let her login anymore.

At first it seemed as if the account may have been canceled, but OP suspects the password was changed and her friend wasn’t informed – so perhaps the person paying for the account wasn’t as “ok with it” as her friend assumed.

So my friend is a heavy Netflix user. She was in the middle of a show when her account got canceled. However, she uses her friend’s Netflix account, and I believe this friend was OK with them using it. However, today I was told that when she tried to login she received an “incorrect password” notification, and when a Netflix account gets canceled the error says something along the lines of “would you like to renew?”

The friend is upset about being lied to and about having her access cut off without warning.

She says she is upset at both 1) being lied to, as the Netflix owning friend lied about canceling the account when really she changed the password and 2) being mid-show when the password was changed. I can kinda understand the being lied to part, but not the mid-show part. She and I agree that it’d be more mature for the Netflix-owning friend to just tell her and her family that they don’t want them on the account anymore, but I understand why they lied to be honest.

OP thinks she might have an argument about being lied to, but not about the rest of it – it’s their account, their rules, and they really don’t have to explain anything they don’t want to, right?

However, I feel like she has no right about the fact that she no longer has access to the account. It’s not hers and she’s not toooooo close with the people who own the account. For example, if I give you my phone charger and I want it back even though my phone is at 80%, then it’s my right to get my charger back. It’d be wack and odd of me to ask, but in the end it’s my property.

The friend claimed she just wanted to vent, but OP was just annoyed and figured her friend was way out of line.

She then kinda went on about how she doesn’t wanna hear about what’s “morally right” and just wants to vent to process emotions. I get venting and wanting to express emotions, but in all honesty I personally think this isn’t something that this valid to vent about. Idk, am I just an insensitive asshole???

What does Reddit say, though? Read on to find out!

Honestly, there are way, way bigger problems in the world. 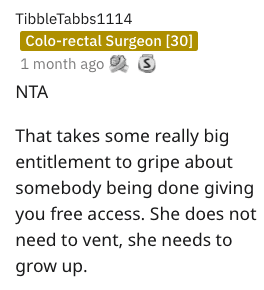 Yeah they just didn’t want to deal with it. 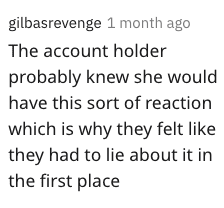 Plenty of people suspect there’s probably more to the story.

Mooching is nothing new, but entitlement kind of seems like it’s gotten worse. 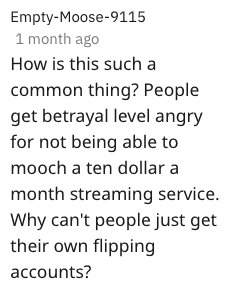 This is true. Though it does add up. 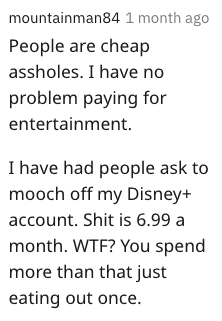 What are your thoughts? Drop them in the comments!