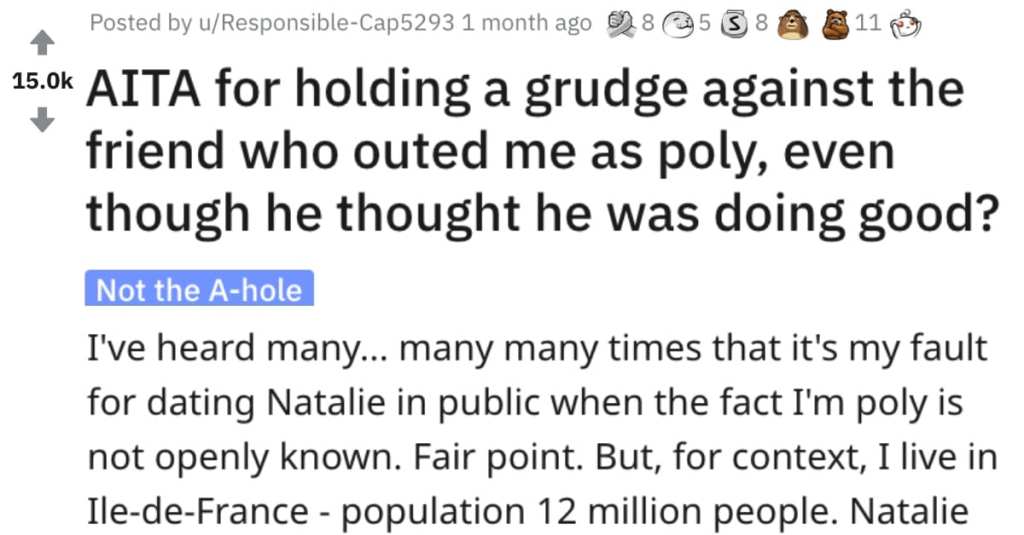 Is This Guy Wrong For Holding a Grudge Against the Friend Who Outed Him as Poly? People Responded.

Some people hold grudges and some don’t.

But I think it’s safe to say that this guy DEFINITELY against a friend who betrayed his trust.

And he took to Reddit’s “Am I The A**hole?” page to ask the fine folks there if he’s wrong for doing so.

AITA for holding a grudge against the friend who outed me as poly, even though he thought he was doing good?

My wife, Lisa, has a boyfriend (Jeff) and I have a girlfriend (Natalie). The four of us hang out together, we’re all consenting but I don’t advertise that I’m anything other than traditional monogamous with my and Lisa’s friends.

Enter Kevin, a not-so-close friend of Lisa’s who happened to see me out with Natalie ~2 years ago. He assumed that I was cheating on my wife (fair) and tried to right that “wrong”. If he’d just gone to Lisa and said it to her, she’d have clarified the misunderstanding, no harm done.

Instead, he talked in private with several of my friends to “gather evidence” on me. Every time, he told our friends that I’m a cheater, low life, monster, etc – one friend was approached on Facebook messenger and screencapped Kevin’s conversation. Kevin said, I quote: “Help me take down that f__ing b**tard”.

Then Kevin finally heard from Lisa that she approved of my relationship with Natalie, and I was forced to come out as poly publicly to shush the rumors I’m a dirtbag cheater. So, thanks Kevin.

I’ve been clear: If Kevin is invited anywhere, I’m not going. I still hate the guy’s guts. I’ve been the butt of every joke and called a cuck a hundred times since everyone knows that my wife has a bf.

Kevin demonstrated genuine hatred for me, I refuse to ever consider him a friend again, even though Lisa insists that Kevin “thought he was doing the right thing.” I refuse to give the dude another chance.

Now let’s see how people on Reddit reacted to this story.

This person said that the man’s friend Kevin might have a thing for his wife and that’s why he spoke up about this. 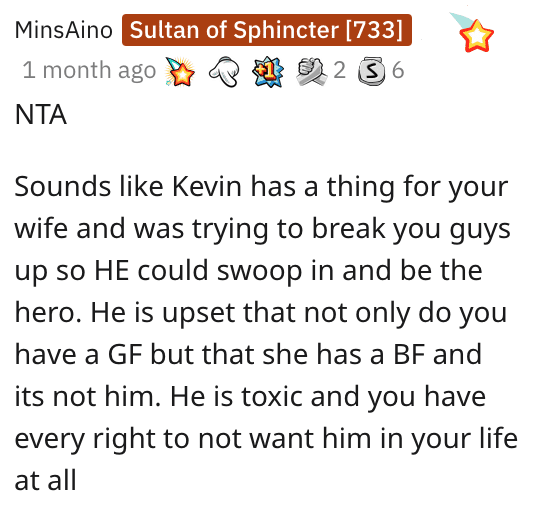 Another reader said that the whole matter really could have been handled pretty easily.

Why all the drama…? 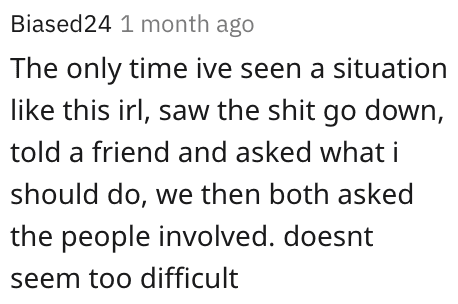 This individual said that Kevin definitely DID NOT think he was doing the right thing and he went straight to the rumor mill. 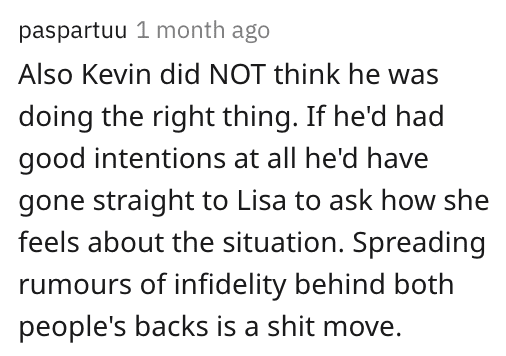 Lastly, this Reddit user said that while Kevin definitely blew this situation up, everyone is to blame here.

And they said that the guy who wrote the post dug his own pit and he needs to accept responsibility for his actions.

Do you think this person had a right to hold a grudge?

Or are they overreacting?